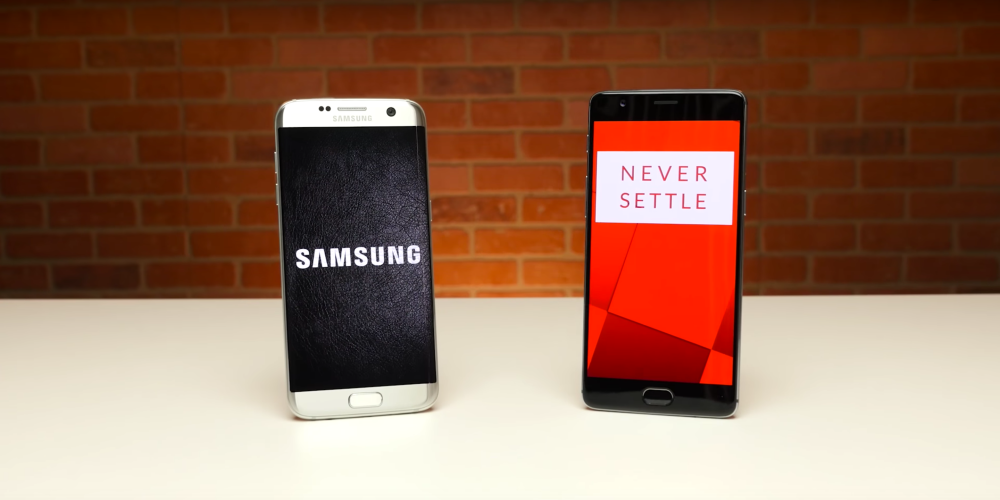 They say that specs don’t matter; and that, to an extent, is often true, in the sense that software optimization can take you to far greater lengths than a more powerful processor or some extra RAM. We reported about a video comparison posted a few months ago by PhoneBuff’s David Rahimi between the two models of the Galaxy S7 edge — the Snapdragon and Exynos-powered ones — where the latter prevailed largely due to some in-house software tuning made by the Korean giant.

But for all its technical prowess, Samsung‘s top smartphone couldn’t help but lose its throne to a newcomer…

Using the Exynos S7 edge as a reference model, Rahimi shot another video comparing the device to OnePlus‘ new 3 flagship, which is powered by the same Snapdragon 820 installed in the US units of Samsung’s phone. However, running the usual two-phase test, the S7 couldn’t keep up with OnePlus’ device, ultimately ending the race a full twenty seconds behind it.

This test comes after numerous complaints that led OnePlus to fix the 3’s RAM management issues, which throttled the handset’s performance so that its 6GB of RAM weren’t of much use; so much so that a similar, pre-software fix comparison between the same two devices showed Samsung’s device on top. In the new video, however, the fix seems to have come fully into effect, with the 3 leading both the first and second round with minimal reloading times; something particularly noticeable — and noteworthy — with games.

I wouldn’t quite put my finger on it, but I suspect that the combination of 2 additional gigabytes of memory (6 vs. the S7 edge’s 4) and the use of a less power-demanding 1080p display (compared to the edge’s QHD panel) had a clear impact on the phone’s overall performance, now that OnePlus has made sure that the raw power of the 3 is properly taken advantage of.

The S7 edge remains a blazing fast (and, overall, close-to-perfect) device, no doubt about it, but considering that its price hovers at around twice the 3’s, I believe that OnePlus does indeed deserve some credit. Between this impressive result and another victory against the iPhone‘s Touch ID, it only remains to be seen whether the upcoming Note 7 (which also has a rumored 6GB of RAM) will be able to retake the crown and bring it back to Samsung.

We will make sure to tell you, but in the meantime, check out the PhoneBuff’s full comparison down below.