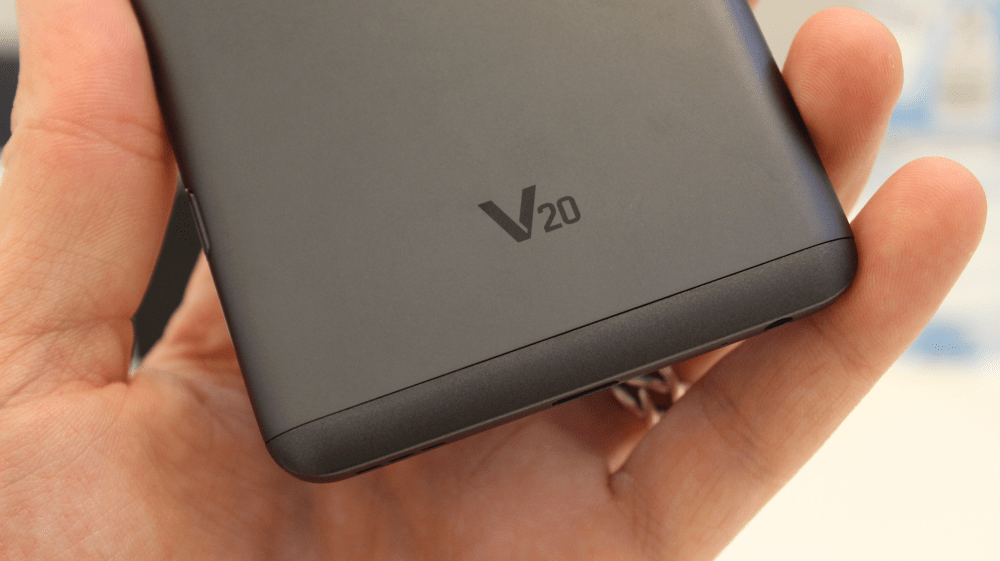 If you thought that the flop that was the LG G5 was all the Korean company had in store for this year, you’re about to be surprised. The company has today announced its V20, the successor to last year’s dual-screened V10 handset and what I would call the true flagship of 2016 for LG. It’s an improved version of last year’s V10 in almost every way, and it also brings some unique features that make it stand apart not only from its predecessor, but from the entire market.

The first thing you’ll notice is that the phone revamps last year’s design with an all-metal premium design, something that has become all too commonplace in flagship phones in the last couple of years. But if you look closely, the phone also brings something new to the table. Unlike the premium all-metal designs of its many competitors, the V20 still has a removable back, which means you can still swap out batteries. The modularity of the G5 is gone, and the metal back now swings around like a hinge when you press the release button on the right side.

The metal that makes up the V20 isn’t just any boring aluminum you find in most phones, though. LG says that the V20 packs AL 6013, which is actually a aluminum-magnesium-silicon-copper alloy commonly used in airplanes and boats. The phone is also US military MIL-STD-810 Transit Drop compliant LG says, but it’s not clear exactly what that means yet — we’ll have to wait and put it through some drop tests of our own to see how it handles a beating. Durability was one of the V10’s crowning features, and LG suggests that things haven’t changed with the V20.

Check out our hands-on video.

As you can see around back, LG has also bought in to a recent trend with the inclusion of a dual main camera system. There’s an 8MP wide angle camera and a 16MP normal camera with Steady Record 2.0 OIS, and a trio “Hybrid Autofocus” which includes laser detection autofocus, phase detection autofocus, and contrast autofocus. When taking cameras with the front-facing shooter, you’ll be able to grab both wide mode and normal mode shots in 5MP resolution — and LG says that those wide shots will be 34% brighter than if you had taken them with the V10. To round out the camera features, there’s also tracking focus for locking into a moving object.

LG also touts the sound features with this handset, confirming the long-rumored Quad DAC and also claiming many improvements in its sound recording capabilities while shooting video. The mics on the V20 are “High acoustic overload point mics,” which basically means that it can record clearer in louder situations. While most phones can only record up to around 120db before losing quality, the V20 can record up to 132db while still maintaining clarity. It can also record in lossless format, supporting 24bit/48hHz LPCM, a notable improvement over the usual AAC.

The phone also brings Bang & Olufsen “signature sound” audio tuning (and paired rear branding and headphones in the box) in some countries, but not in the United States. In all regions, though, LG is shipping the phone with an HD Audio Recorder with Hi-Fi. The recorder supports 24 bit/192kHz FLAC, but other than that, it’s mostly just a fancy recording app.

The signature feature of the V line, though, has always been its second screen, located just above the main display. While the V20 doesn’t have any groundbreaking changes in this department, LG has brought some nice enhancements to the screen that I called “mostly useless” last year. The screen on the V20 is brighter, larger, higher contrast, supports longer signatures (up to 24 digits), and even pairs with what LG calls its “Signature Wallpaper” which creates a cool effect on your home screen based on the first character in your signature.

If you’re interested in the raw specs, you’ll be glad to know that there’s very little to complain about. The phone features a Qualcomm Snapdragon 820 processor (2.15GHz + 1.6GHz quad-core), a 5.7-inch QHD display with a pixel density of 513 ppi, a 16MP main camera w/ OIS and an F/1.8 aperture, a second rear camera at 8MP resolution, a 5MP front-facing camera, 64GB of expandable storage, 4GB of RAM, a 3,200 mAh battery (with support for Quick Charge 3.0), WiFi a/b/g/n/ac, Bluetooth 4.2, NFC. The phone is also physically lighter weight than the V10.

Overall, it’s a substantial improvement and — based purely on my short hands-on time with the phone — it might be a contender for the best phone of the year. It has a solid build, premium design, a removable back cover, improved battery life compared to the V10, and a whole slew of video and audio features that are hard to beat. Pair this with the features that we’ve come to expect from a smartphone in 2016, like its fingerprint sensor and Android Nougat, and this looks to be a great package. We’ll know for sure after we get closer later this month.