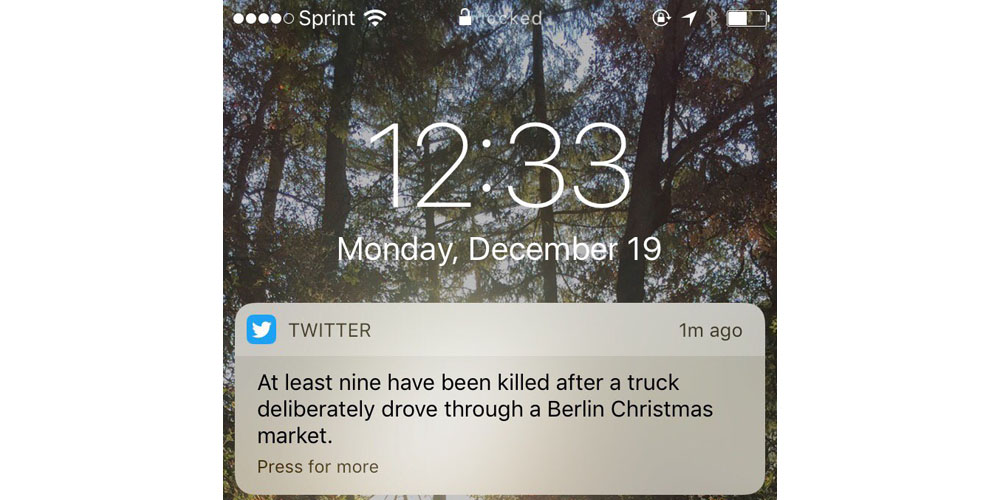 Twitter has used the Berlin Christmas market attack to test push notifications of breaking news alerts in its iOS app. It’s not yet known whether the test extends to the Android app …

Buzzfeed notes that the company appears to be aiming to reinvent itself as a news app as it recently switched category in both Android and iOS app stores from Social Media to News.

After a truck crashed into the Berlin Christmas market […] Twitter pushed a breaking news alert to some of its users that linked to Twitter’s Moments tab, which summarizes the news in tweets. The company did a similar thing when Fidel Castro died last month.

Twitter confirmed to Buzzfeed that it has been sending breaking news alerts as part of a test, using a algorithm to decide who gets notified of what.

Twitter’s description in the Google Play store supports the idea that it is now presenting itself primarily as a news app.

See what’s happening in the world right now. From breaking news and entertainment, sports and politics, to big events and everyday interests. If it’s happening anywhere, it’s happening on Twitter. Get the full story as it unfolds, with all the live commentary.

Be part of what everyone is talking about and get videos, live footage and Moments, direct from the source.

Only in paragraph three does the company talk about sharing what’s happening in your own life.