Behind Apple & Facebook, Google gets an ‘A’ from Greenpeace in 2017 green internet report The 2017 Clicking Clean report from Greenpeace takes an annual look at the performance of internet companies in terms of energy usage, with Google coming in third-place behind leader Apple and Facebook. The company was awarded an A for its continued usage of renewable resources and for pushing governments, utilities, and other vendors it works with to do the same.

The report puts a particular focus on the internet and the energy consumption associated with the data centers and servers that power it. Commitments by Google, Apple, and Facebook to use 100% renewable energy four years ago have caused over 20 internet companies to join in the effort.

In terms of clean energy usage, Google is rated at 56%, with the company still relying on 14% natural gas, 15% coal, and 10% nuclear to meet its consumption needs. Broken down into several categories, Google received top marks in all but one area.

The company was given a B in Transparency for not providing an energy demand or energy mix for its cloud facilities. This is problematic in that it does not allow consumers to make informed decisions. While ahead of competitor like Microsoft and Amazon, it is still behind Apple and Facebook. 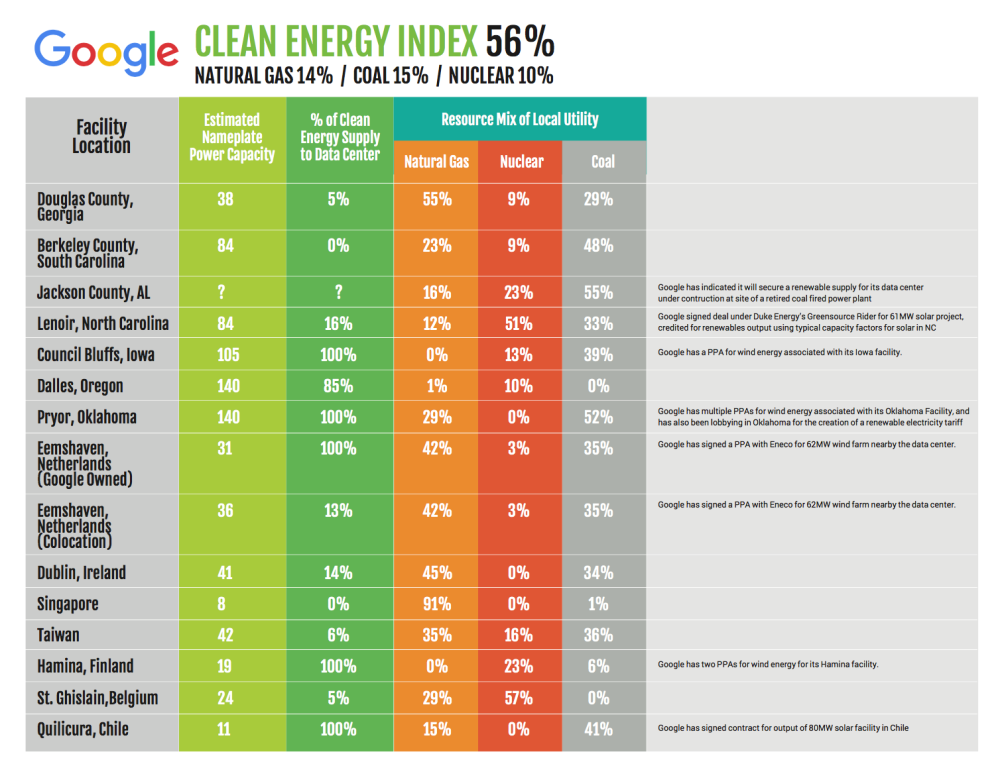 Google received an A for Renewable Energy Commitment & Siting Policy, with Greenpeace applauding the company for staying green while rapidly expanding its Cloud Platform around the world in the past year.

In terms of Energy Efficiency, Google’s use of machine learning to optimize data center operations gets a nod and results in driving significant saving gains. Meanwhile, in Advocacy Google has been “actively engaging in important policy debates.” In the US, the company has been very active at the state-level, while sponsoring energy tracking programs throughout Asia where the infrastructure is lacking.