Late last year Google announced that one of its services, Google Contributor, would be closed and subsequently replaced by another new program. Up until last week, the service was still fully functioning for many active subscribers, but today Google pulled out the rug, closing out all active accounts.

Over the course of a few hours earlier today, Google sent emails to active Contributor subscribers to notify them that their accounts had been closed with no new orders to come from that subscription. Further, the email details the amount spent on the service, number of sites affected by it, and the total balance that was remaining in the account. Of course, that remaining balance is being refunded to all subscribers.

Google Contributor, if you’ll recall, was Google’s way to help internet users “thin out” the number of ads seen on a website by replacing AdSense blocks with empty space. Obviously, many already do this with ad blockers, but those tend to hurt the sites visited because it takes away potential revenue and hurts the paycheck of those working for the site (hint hint).

Contributor, on the other hand, charged users a small monthly fee of their choosing to take away a portion of the ads on a page without hurting the site’s revenue. Over the course of the service’s lifetime I paid between $3-$6 a month and I never regretted a dime of it. Now, it seems that the service is dead, and Google’s promised replacement is nowhere to be seen. Google stated the service would arrive early in 2017, so, the clock’s ticking… 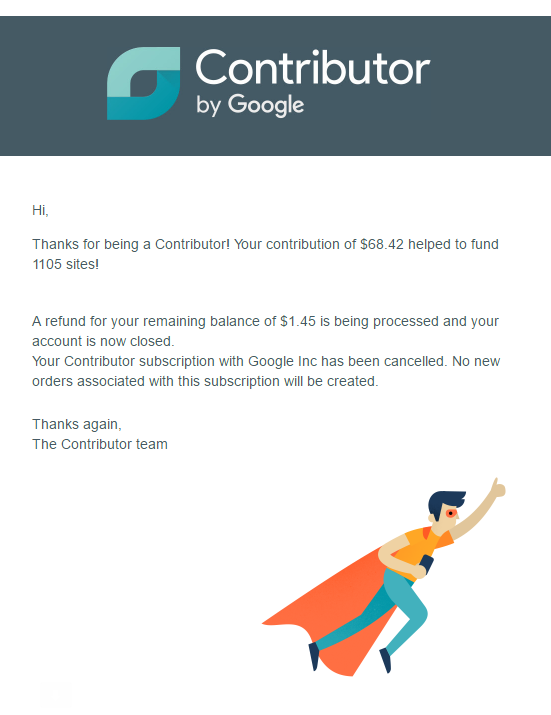