The Galaxy Note 7 was very short lived after handsets began to explode. There have been reports and rumors that the battery was the root cause but results of an official investigation had yet to be announced. Today, Samsung has confirmed that the Note 7’s issues were indeed battery-related, specifically due to positive and negative battery cells making contact…

Lithium-ion batteries are made up of positive and negative cells that are separated so that they will not make contact with each other. When contact is made, though, the battery can short-circuit and catch on fire. This is what happened inside phones from both the first and second recalls, from two separate suppliers — although for different reasons.

Samsung’s investigation found that the batteries from the first Note 7 devices were igniting in the upper right corner, mainly because the battery case was too small.

The second set of handsets had issues on the left side of the device. These batteries, manufactured by another supplier, had their own defects, including missing insulation tape and abnormally high welding bars which then caused the batteries to short-circuit and ignite. The welding bars specifically created too much pressure within the battery which is what caused the cells to ignite.

During their testing, Samsung built a custom charging and discharging facility to help replicate the failure. The company also tested to make sure that the phone’s fast charging, wireless charging, and iris scanner were not the cause of the issue.

Samsung also reports that 96 percent of all Note 7 handsets that were sold worldwide have been returned. They thanked mobile carriers for their assistance in getting all of the devices back.

Going forward, Samsung has committed to an 8-point battery safety check for all of their devices. These range from durability and visual inspections — which are already commonplace in most factories — all the way to X-raying every device before it leaves the facility. 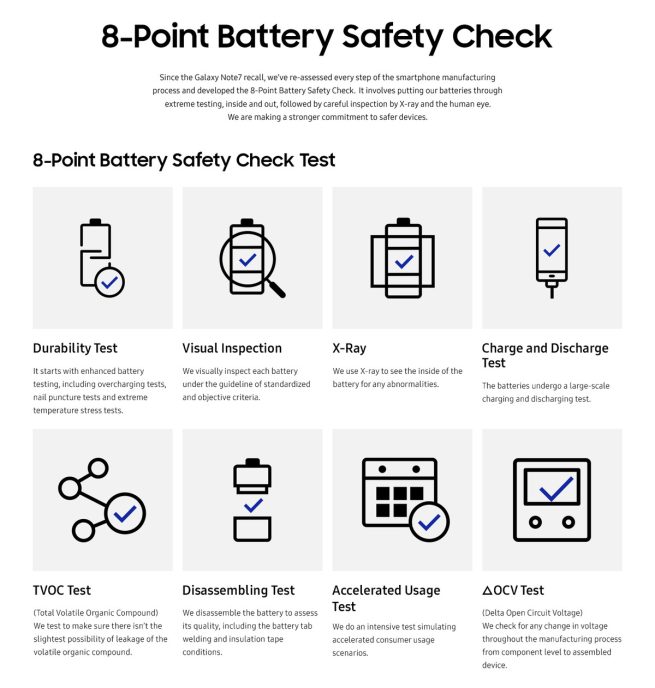 All of these tests will go into effect immediately and will be used on all of their lines of handsets — not just the flagships. Samsung does believe that if all eight of these safety checks were in place before they shipped out the Note 7, the defects found in both rounds of batteries would have been detected before they endangered anyone.

This is all being done by Samsung to try and regain the public’s trust after the incidents revolving around the Note 7. After their extensive investigation of over 200,000 Note 7s plus having two independent agencies run their own investigations, Samsung is taking all responsibility for the exploding handsets.

Lastly, Samsung hopes to share their new battery safety check standard with others in the industry. The company believes that stricter safety standards will limit the number of lithium-ion battery incidents in the future. Until we find a better solution to lithium-ion, we will just have to rely on teams like the one at Stanford who created a battery with a built-in fire extinguisher to keep our handsets safe.