Chinese phone sales continue to be dominated by local brands as shown by the latest analyst data via Bloombeerg. With the exception of Apple’s iPhone, all of the top manufacturers in the region are Chinese companies that make Android phones. Across 2016, Oppo, Huawei and Vivo grew in the double digits to take the top three slots and represent half of all smartphone sales.

Xiaomi slipped to fourth place with 35% fall in sales and Samsung Galaxy phones failed to hit the top five at all, being grouped into the ‘Others’ miscellaneous category by IDC.

The report says that the local titans grew marketshare by expanding retail store distribution whilst online sales flattened out. Oppo doubled its shipments year-over-year, going from 35 million units in 2015 to 78.4 million in 2016.

Chinese manufacturers are now trying to encroach on international markets. Huawei has a substantial presence in the US with its range of phones but stumbled domestically across 2016, dropping to fourth place in China with less than 9% market share. 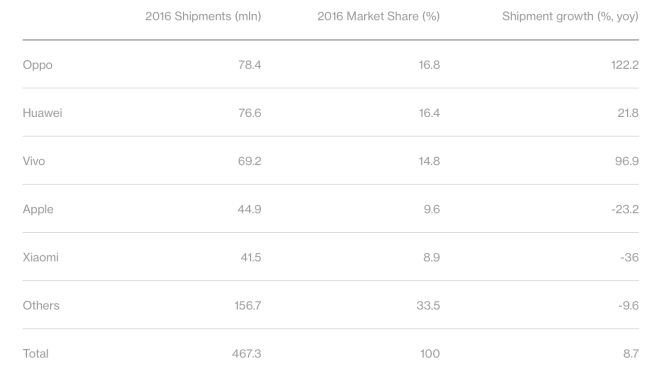