Review: Samsung Chromebook Plus has a display and build worthy of Android apps [Video] 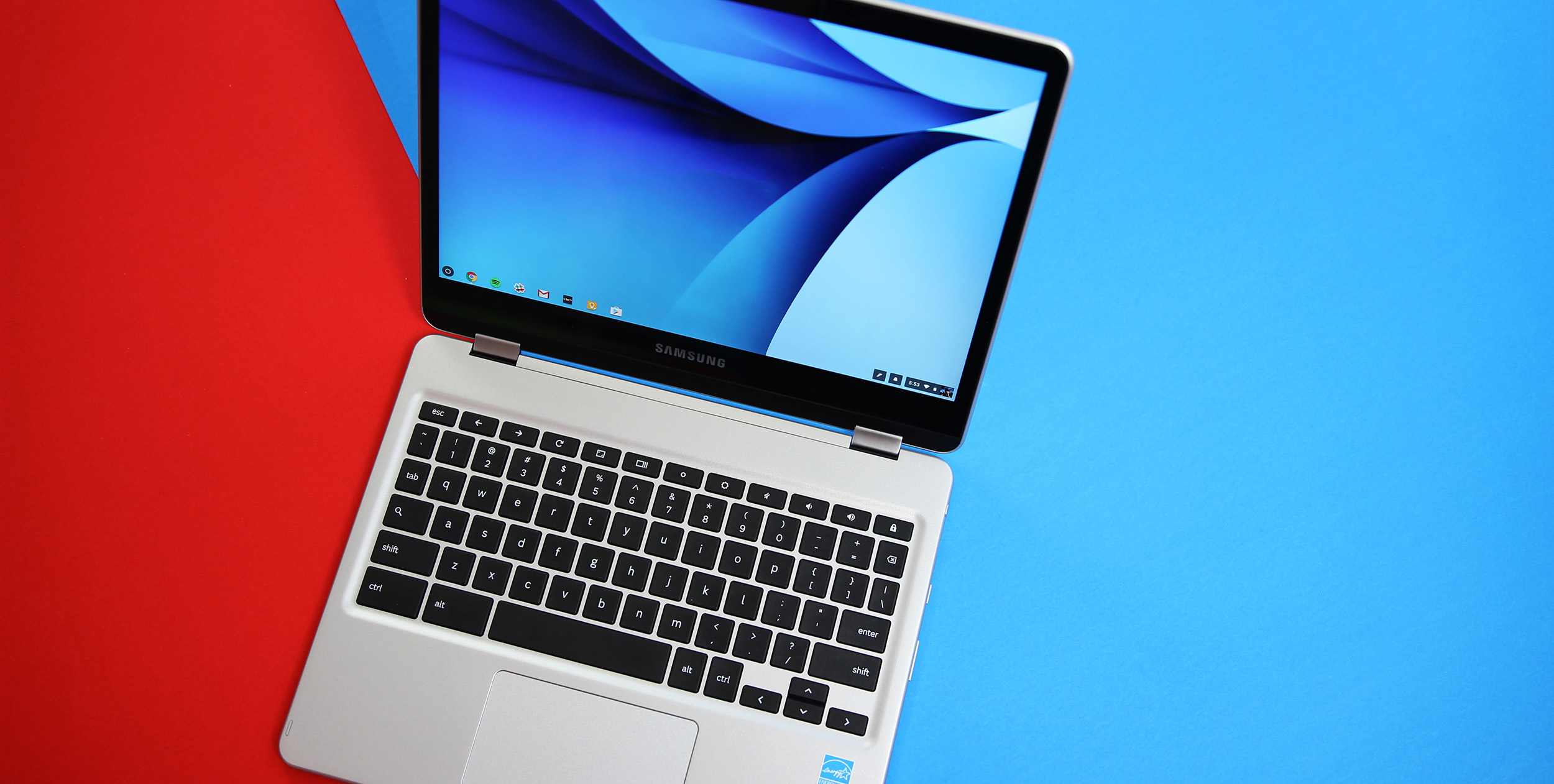 Over the past year, Chrome OS has evolved in huge ways, but most drastically with the addition of Android apps. The matching hardware, conversely, hasn’t changed that much. We’ve had some Chromebooks like the Acer R13 which nailed the 2-in-1 form factor, but nothing we’d call revolutionary.

That changed as the calendar flipped over to 2017. At CES 2017 we got a couple of new Chromebooks including the ASUS C302A, and two new models from Samsung. In this review, we’ll be taking a closer look at the Samsung Chromebook Plus.

A New Phase Of Chromebook Design

Looking back through the years of Chrome OS, you can see three distinct “phases” when it comes to design. In the beginning, most Chromebooks were fairly ugly “this is a netbook” designs. Then, we started getting some more impressive higher end laptop replacement options, like the ASUS Flip, HP 13, Acer R11, and, of course, the Chromebook Pixel.

Now, we’re entering the third phase of designs, centered around Chrome OS’ new dual-personality. Now, Chromebooks need to be the affordable and fast-for-their-hardware machines that they once were, but also handle the new capabilities their software now has in Android apps.

The Chromebook Plus is a clear start to that next phase, offering a clean, functional 2-in-1 design that is also very portable. The entire machine is built of out a magnesium alloy that feels almost super premium, but not quite. Rather, that material allows the Chromebook to be significantly lighter, adding to how portable the machine is.

Little touches on the design like the rounded corners and edges, raised power and volume buttons, and fairly sturdy hinge add up to a pretty excellent build overall. Sure, others might be slightly better, but Samsung is no slouch in this area. 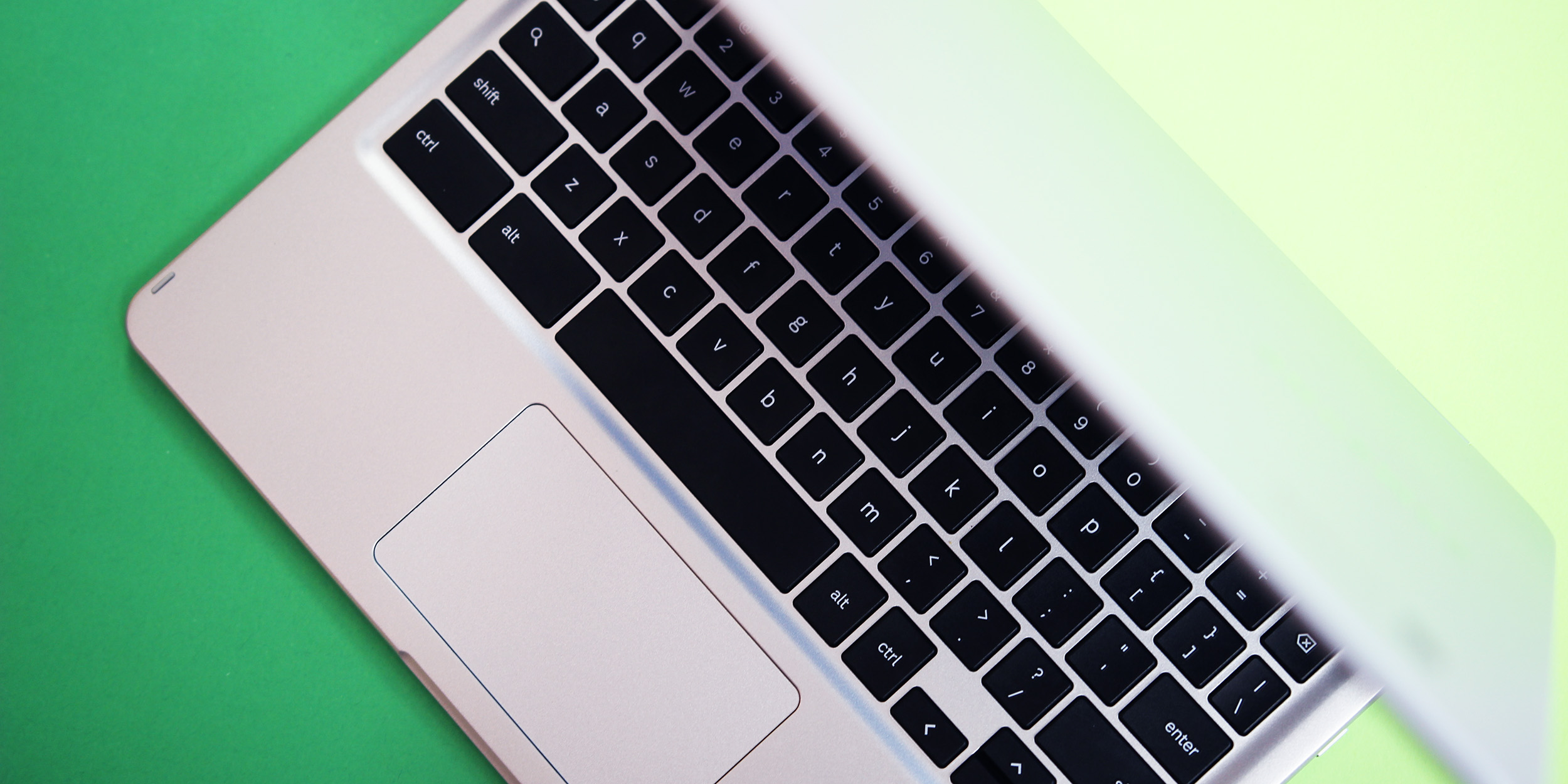 That solid build is backed up by one of the best displays I’ve ever used on a laptop, much less a Chromebook. The 12.3-inch 2400×1800 display is sharp, has solid colors, and is one of the brightest I’ve seen. The glossy finish isn’t great for outdoor use, but the brightness more than makes up the difference.

Really, the display is the biggest reason you should consider the Chromebook Plus. Not only is it sharp and bright, but its 3:2 aspect ratio allows for extra screen real estate. This especially comes in handy when you’re viewing webpages, which is most of what you’ll be doing on a Chromebook anyway. 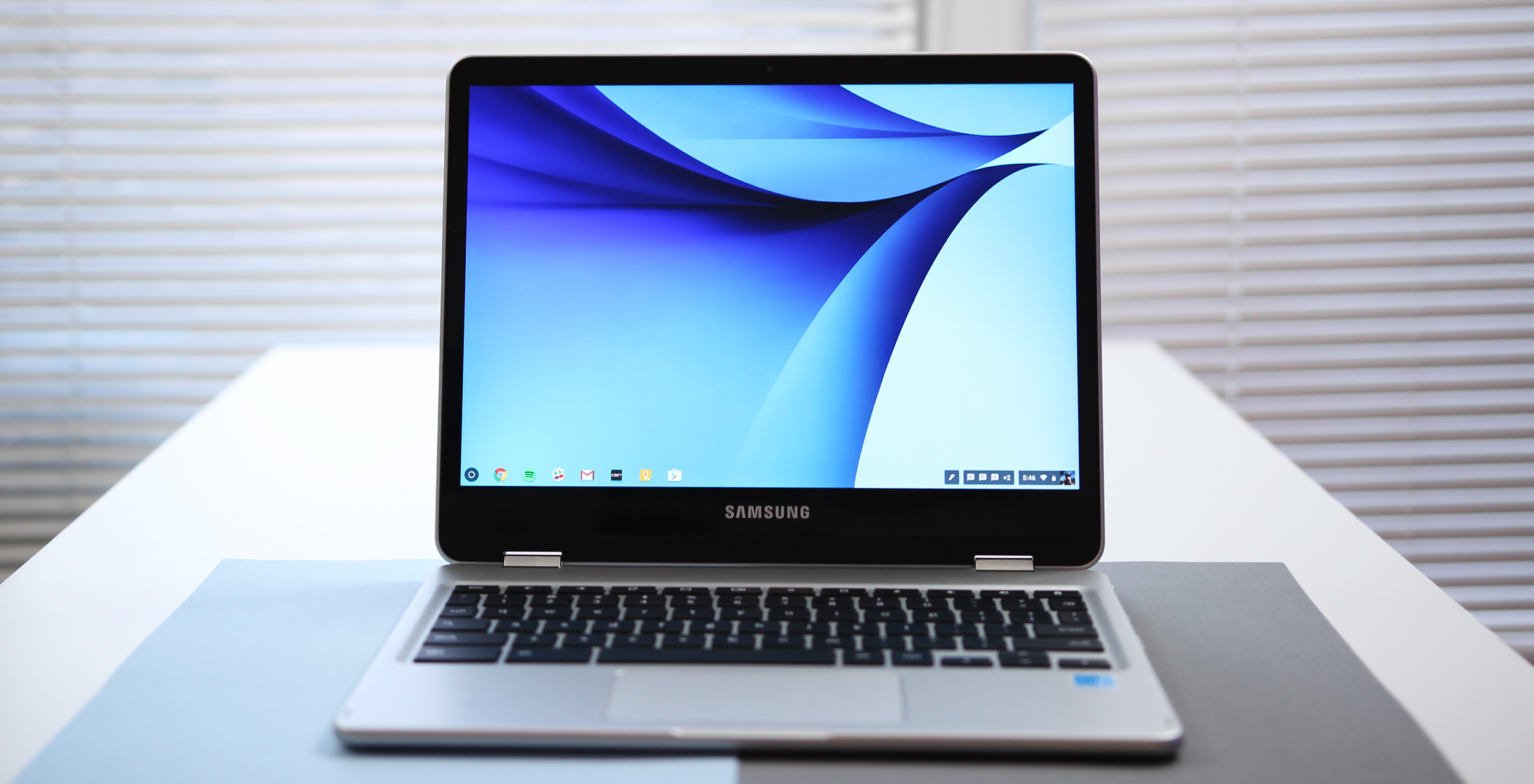 Under the hood, the Samsung Chromebook Plus is packing 4GB of RAM, 32GB of storage, and the new “OP1” chipset that Google helped develop for new Chromebooks. The system is based on an ARM architecture, and that’s where it falls flat a little bit for me.

ARM processors have a long history on Chromebooks, but few have ever been all that impressive in the performance department. I can easily say the Chromebook Plus is the best ARM-powered Chromebook I’ve used to date, but that’s not saying a ton. I often saw issues with the machine stuttering, especially when I was using Android apps or had them open in the background. 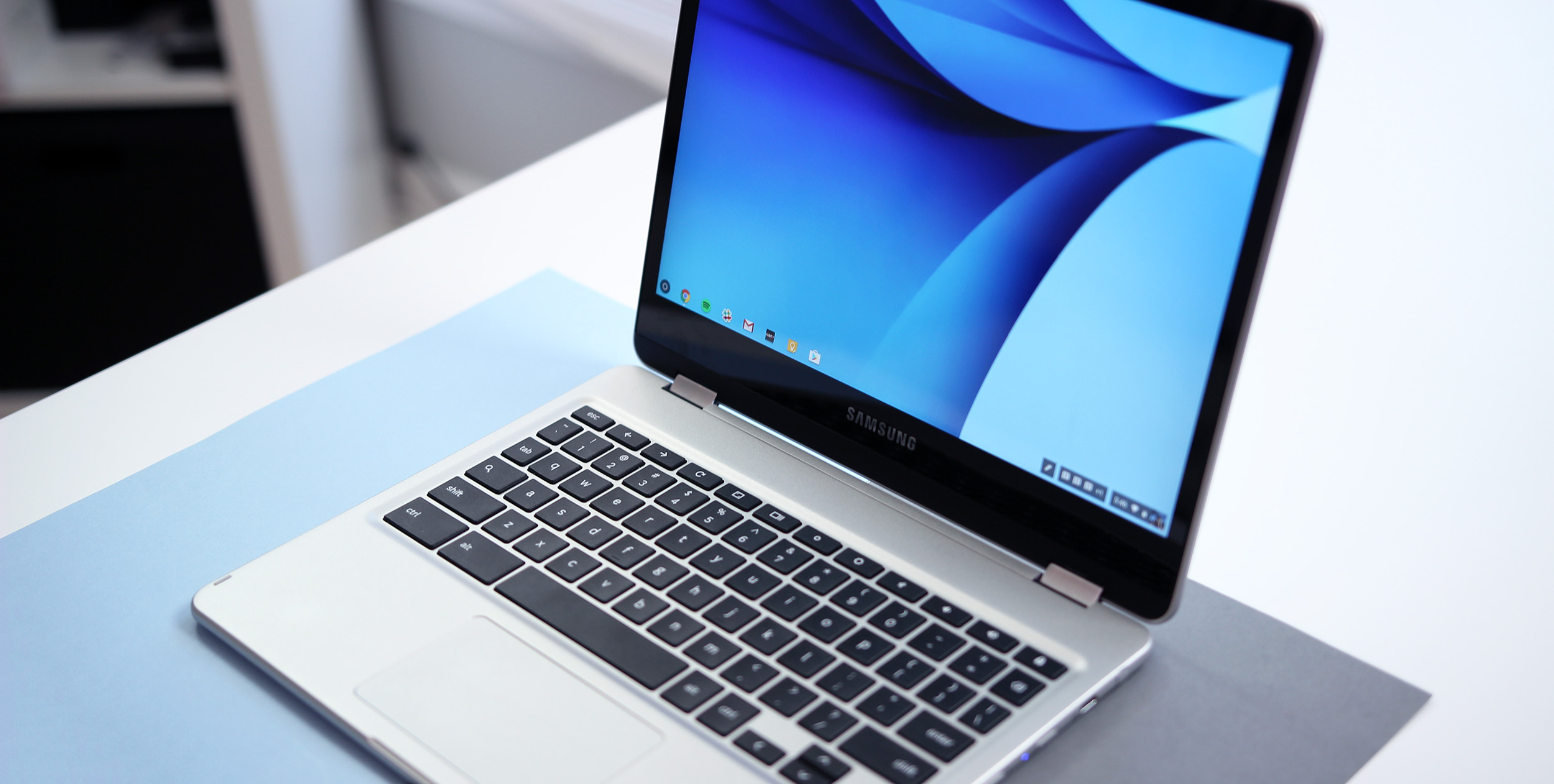 On average, I use the Chromebook Plus with 5-8 tabs open and 1-2 Android apps. It can handle that workload, but that’s about it. On lighter sessions where I only have a couple tabs and apps open, the machine held its own quite well. That lines up with past ARM-powered Chromebooks I’ve used, but I feel as though the high-res display on the Chromebook Plus is what really chokes performance. So you’ll have to decide if that’s worth the tradeoff.

I’ll never say it better than my colleague Abner Li did last year: Android apps on Chrome OS make it a viable competitor to the desktop OS duoply. Personally, I use Windows 10 on a day-to-day basis, but Chrome OS has always been my choice for writing or casual browsing.

My sole issue with that, though, was apps. Sure, you can run everything you need in the browser without an issue, but sometimes it’d be nice to be able to do a little more, and that’ exactly what Android apps bring to the table. 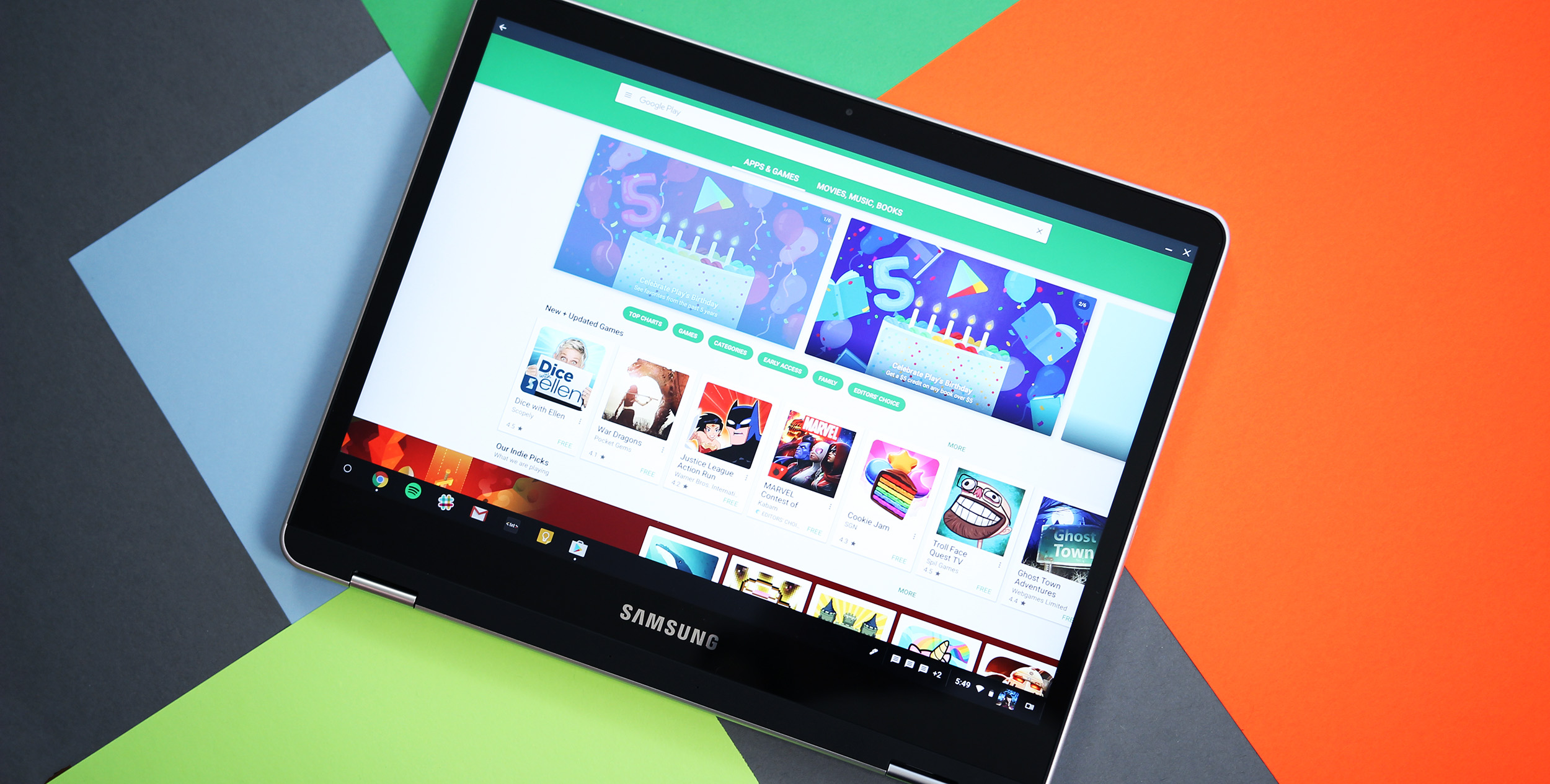 The added functionality is excellent, but this is still very much a feature in beta. Some Android apps just don’t work with Chromebooks, and others have some interesting issues. My biggest issue was with the Slack app, which constantly disconnected and would require closing the app and reopening it to work again. Overall, though, this is a very usable system, it’s just not perfect yet.

As for Chrome OS itself, it’s the same great lightweight OS I’ve come to love. The look of certain things is constantly evolving, but all of it is for the better. It’s also fantastic how the OS has integrated so well with Android apps, especially in notifications.

Due to the more compact size of the Chromebook Plus, the keyboard has seen some interesting changes. The keys are spaced a little differently compared to other laptops, and the overall layout feels a little… off. It’s hard to describe, but basically, imagine that some cut about 1/4 the size of each main key on the keyboard. Realistically, this isn’t an issue and just results in a few extra typos and a little more time adjusting to the difference.

The toughest part for me was the outer keys, such as backspace, tab, and others like that. It’s not that they’re out of place, as they’re not, but simple that they are smaller and your finger typically aims in a slightly different spot. 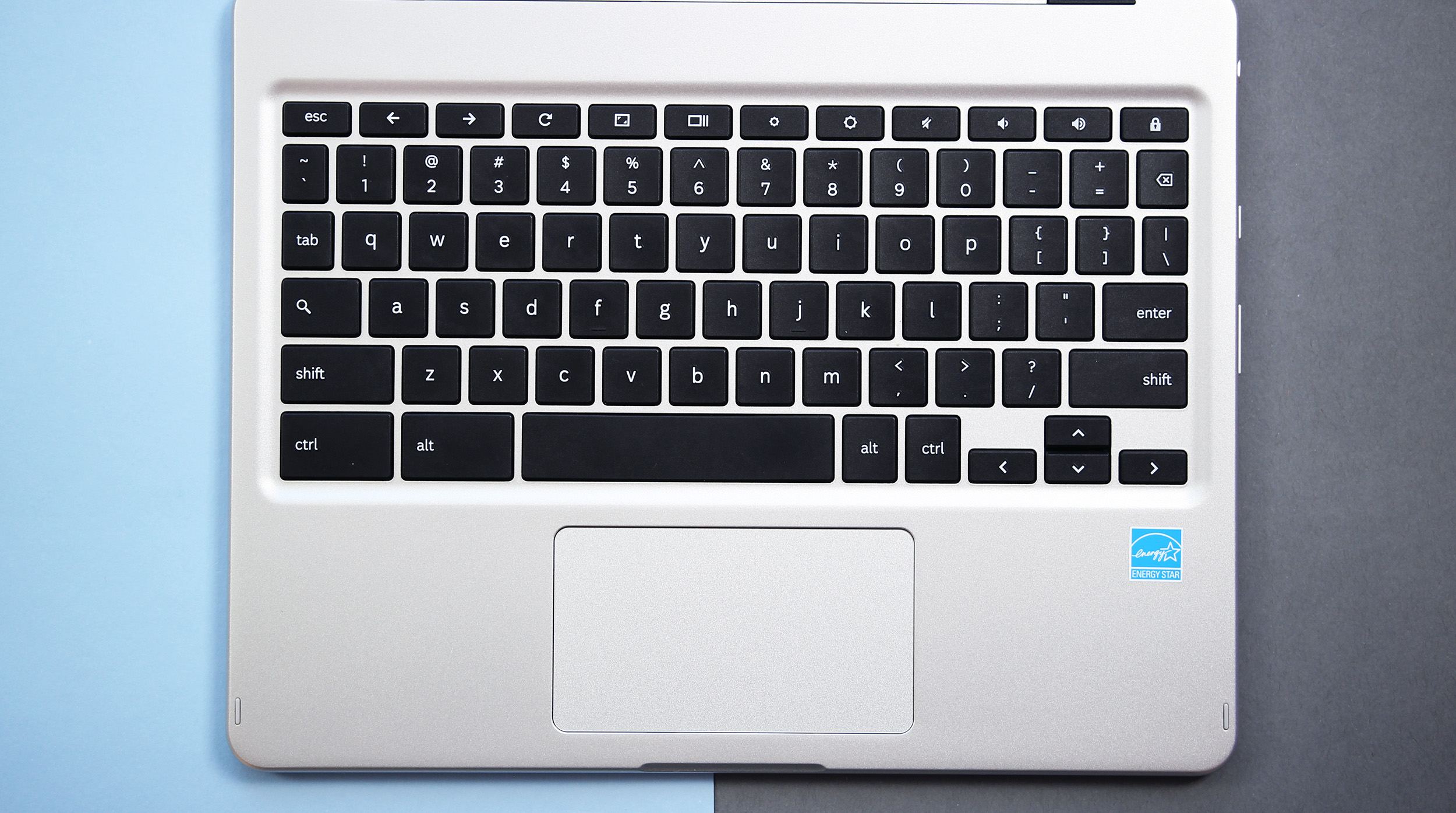 Each key on the keyboard is also slightly curved inward which lets your finger sit in place a bit more comfortably. It’s a subtle touch, but nice nonetheless. Key travel is also solid, as is tactility. Unfortunately, there’s no backlighting, which seems like a strange omission for a device at this price point.

As for the trackpad, it’s got to be one of poorest I’ve tried on a Chromebook to date. Does that mean it’s truly bad? Actually no, it’s just that most Chromebooks have absolutely spectacular trackpads, and this one doesn’t quite hit par. This trackpad works well most of the time, but the times it doesn’t makes it very frustrating to use. My finger tends to stick on it a bit when dragging and clicking, but at the same time it doesn’t pick up oil or get dirty at all. It’s a mixed bag, but personally I prefer the trackpad on other Chromebooks, such as my Dell Chromebook 13.

Then there’s the Chromebook Plus’ unique input method — the stylus. This is the first time we’re seeing a stylus on a Chromebook, and the fact that this one is embedded into the machine is just icing on the cake. 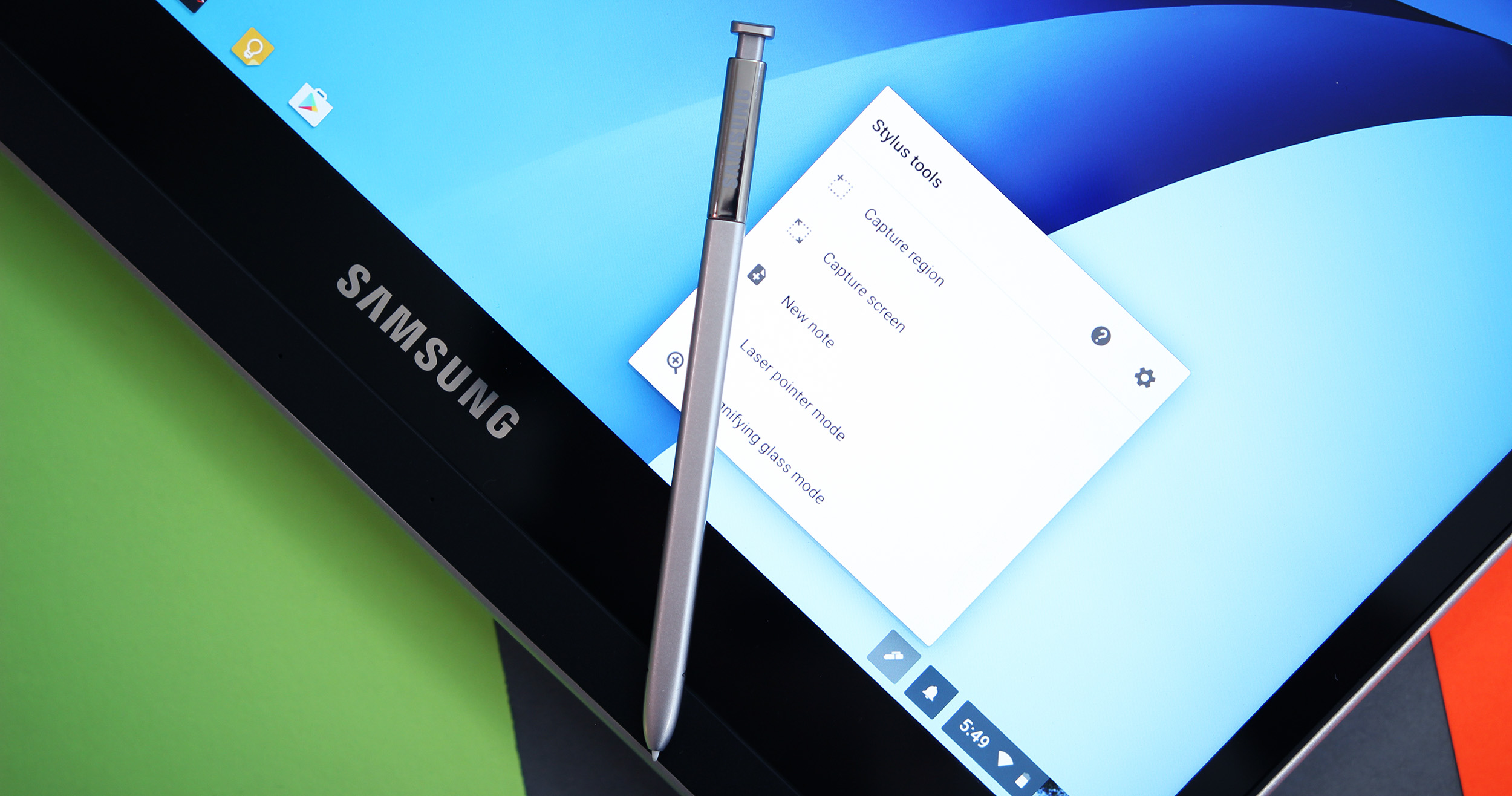 If that stylus looks familiar, well, it should. This is almost the same exact stylus seen in the Galaxy Note 5, but without the little button on the stem, and no, you can’t stick in it backwards. The idea is the same too. You can use this stylus as a surrogate finger if you’d like, but you can also use it for a variety of specific tasks. The first is for handwriting in apps like Google Keep or OneNote, both of which also support handwriting to text features. Then, you can use the stylus for taking screenshots, using it as a “laser pointer,” or to magnify portions of the screen.

As I mentioned, ARM-powered Chromebooks can sometimes fall flat in terms of performance, but they make up for that with battery life, and the Samsung Chromebook Plus is no exception.

With medium to light usage the Chromebook Plus can last upward of 10 hours on a charge in my usage, surpassing Samsung’s claims.

Further, the charging method is simple and easy. Included in the box is a 30W charger for the Chromebook Plus which ends with a USB-C connector. That charges up the Chromebook in just a few hours. That USB-C connection also makes it easy to charge up the Plus with any battery bank capable of pushing enough power. 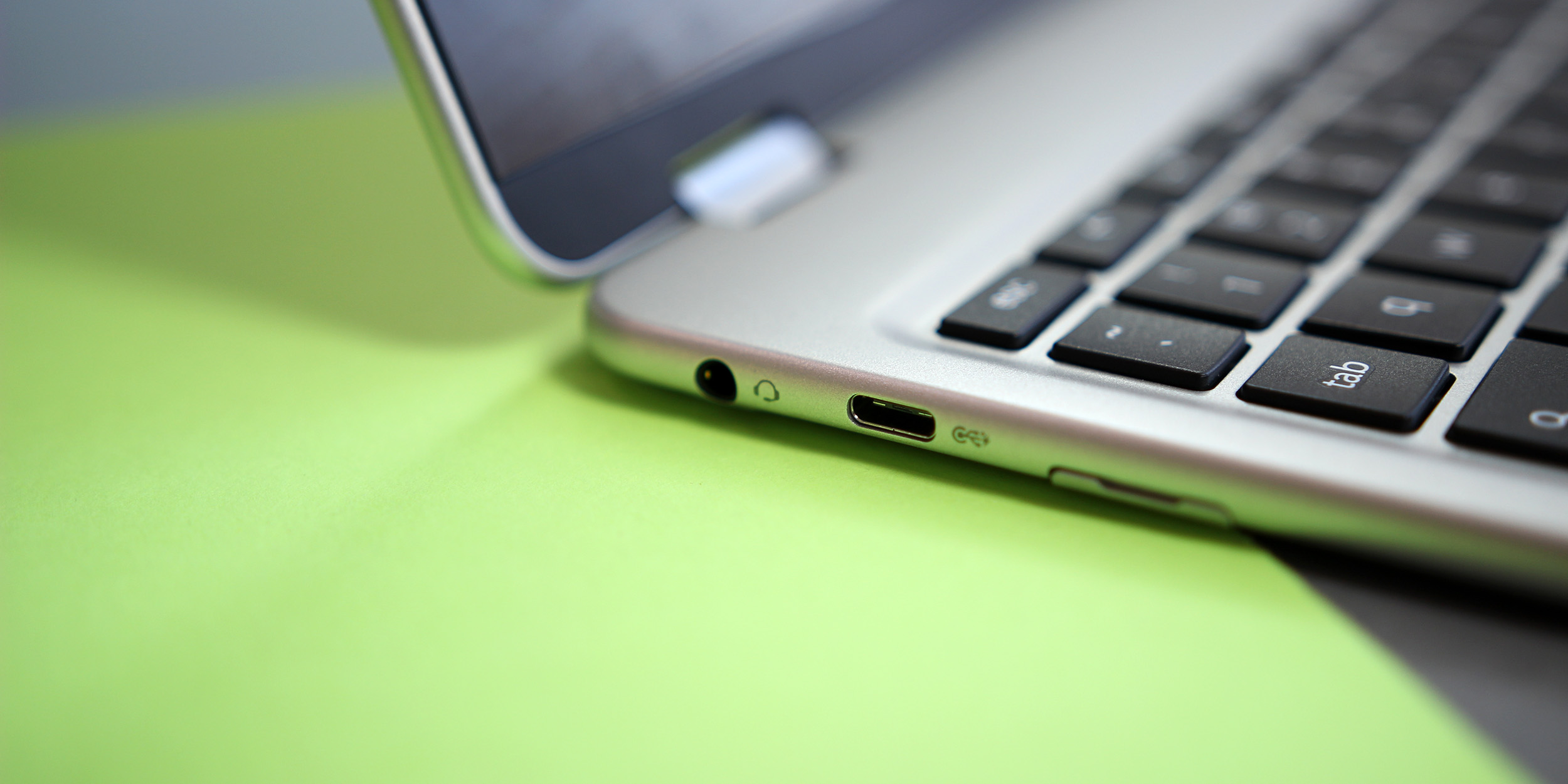 USB-C Only Actually Makes Sense On A Chromebook

To make laptops thinner, many are dropping ports. On Chromebooks, this actually isn’t a bad thing. The Chromebook Plus packs a USB-C port on either side of the machine, a microSD slot, and a headphone jack — that’s it.

That’s not a bad thing on Chrome OS because, in all reality, you wouldn’t need to plug something in all that often. When you do, that’s where an adapter or two comes into play. It might have been nice to have the convenience of at least one full-size USB port, but I can live without it on Chrome OS.

Mounted to the bottom of the Chromebook Plus you’ll find two down-firing speakers. Normally, this would take some major points off in my book, but Samsung has handled it pretty well on this machine.

I’m not sure exactly where the extra sound comes from, but when you cover up the bottom speakers, sound still comes out loud and clear. I’d guess that, like the Chromebook Pixel, there’s a speaker hidden under the keyboard. Regardless, I was pleasantly surprised, even if these aren’t very good speakers, especially at high volumes.

When it comes down to it, the Samsung Chromebook Plus is a fantastic machine, but it’s not perfect. At $449, it’s something I can’t recommend to everyone, simply because I know that the only people who will be interested in spending so much on a Chromebook will want something (Pixel?) with a little more power. 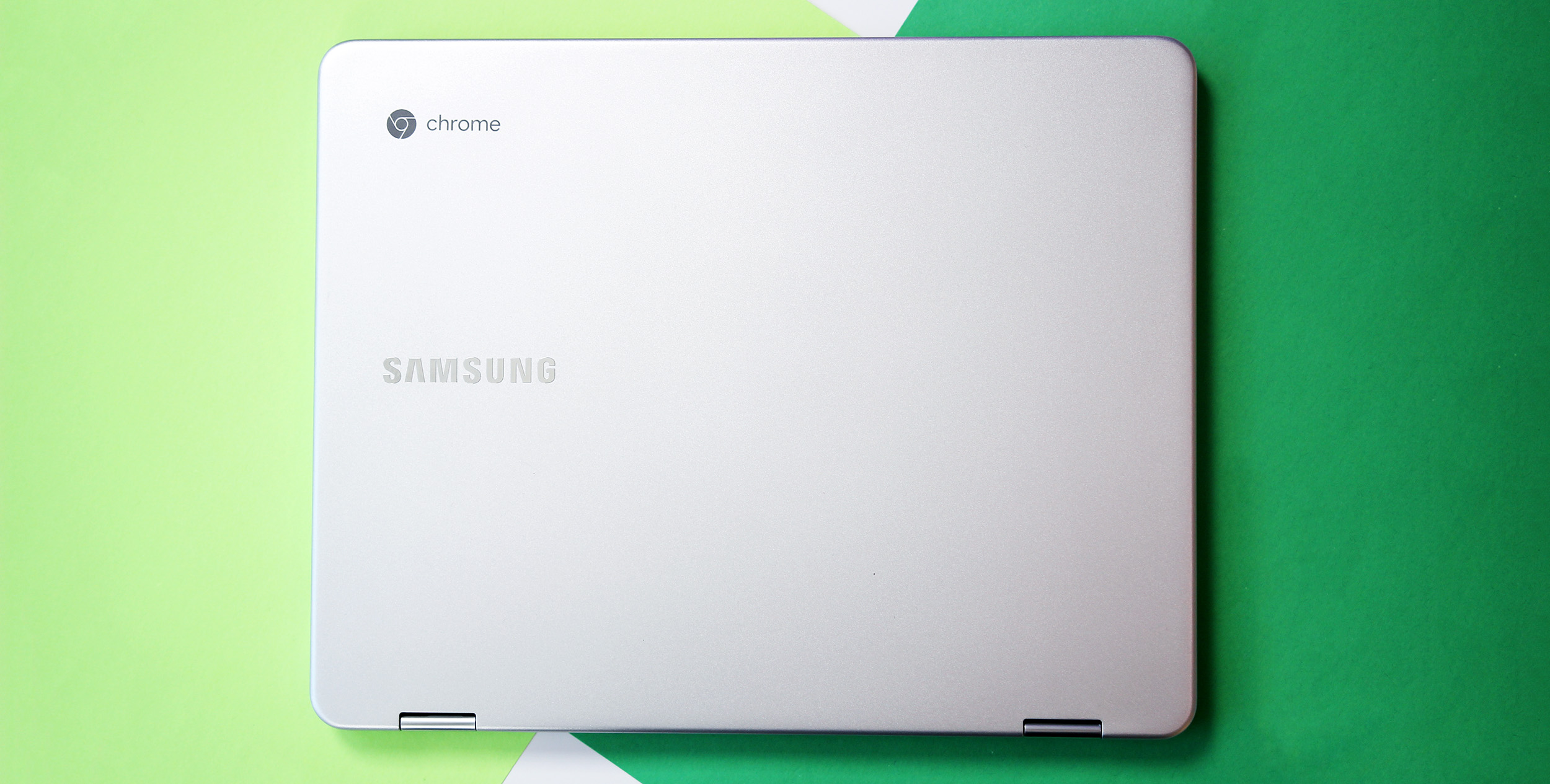 This is a machine designed for those who need the basics and super long battery life. If you can afford an extra trip to the charger, you’ll want to opt for the Intel-powered Samsung Chromebook Pro which releases soon. Stay tuned, we’ll have more on that machine soon.

In the meantime, you can pick up the Samsung Chromebook Plus from Amazon, the Google Store, Best Buy, and various other retailers around the web and in retail locations.