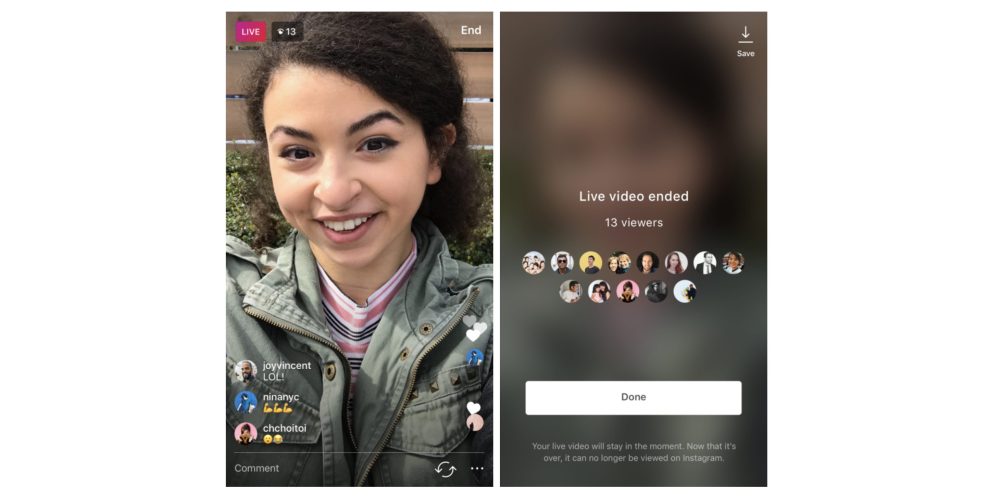 Instagram today has announced a new update for its iOS and Android apps. The update comes not long after the social network added support for geostickers to its Stories feature. Today’s update, however, relates to live video and adds support for downloading live videos once the broadcast has ended…

Instagram revealed the update in a post on its official blog, explaining once a live stream has ended, the broadcaster now has the ability to download the footage and save it to their smartphone. After the live stream ends, the broadcaster will see a new “Save” button in the upper-right corner of the app. Tapping this will save the footage to your camera roll, thus preserving it forever.

One important thing to note here is that after the video has been downloaded, it still disappears completely from the Instagram app itself. Neither the broadcaster nor the viewers will be able to watch it in the Instagram app after the stream has ended. Instagram also says that only the raw video footage will be saved, not the likes or comments the stream received.

Here’s how Instagram explains the new feature on its official blog:

Starting today, you’ll have the option to save your live video to your phone at the end of a broadcast. While live videos will continue to disappear from the app when you’re done, this update gives you the flexibility to hold onto your video and re-watch it later, especially if something exciting happens during your broadcast that you want to remember or share.

After your live broadcast ends, tap Save in the upper right corner. You’ll only be able to save your video — not the comments, likes, number of viewers or any live interactions. After saving, tap Done and your live video will be saved to your camera roll but will no longer be available in the app.

Instagram first added support for live streaming video back in December. The ability to download live broadcasts comes with the latest version of the Instagram app sfor iOS and Android, which are available on each respective platform today.

Are you a fan of Instagram live video? Let us know down in the comments.