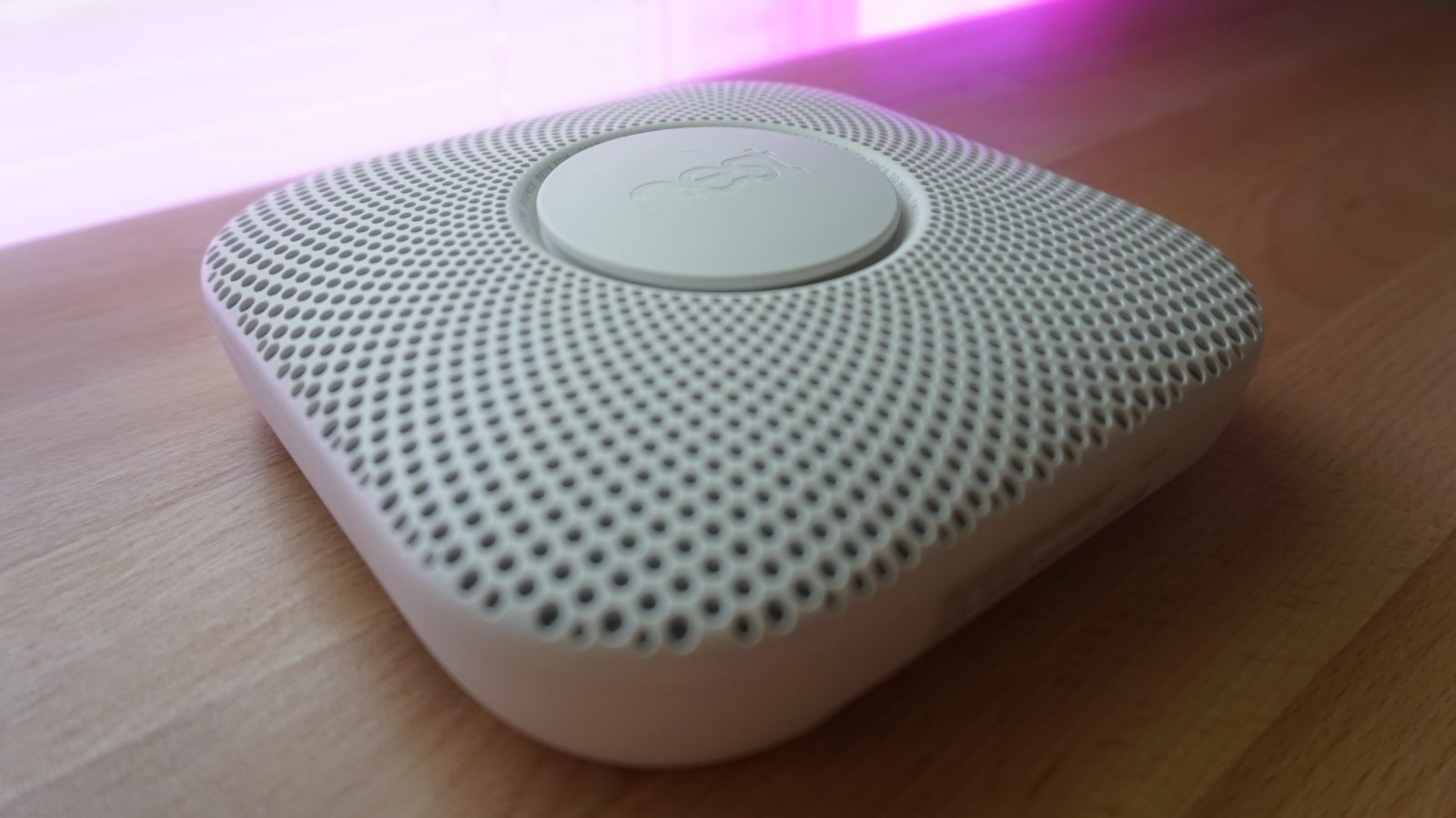 As I mentioned a couple weeks ago, I’ve been Nest-ifying my house lately. First came the Nest Thermostat E, then came the Nest Secure, then came a couple Nest Cam IQs (still working on installing the outdoor model…), and this week I’ve topped things off with a Nest Protect.

I’m going to dive deeper into my experiences with Nest Cam and Nest Secure in forthcoming episodes, but this morning I felt compelled to write about the most recent addition to the group: Protect. Actually, I haven’t even “used” it, and that’s part of the point I want to make here.

To clarify that: Yes, I’ve installed my Nest Protect, and yes it’s working fine. I of course wouldn’t be writing this diary entry if I hadn’t. But one thing that strikes me about Protect, after having used the rest of the Nest lineup to some degree at this point, is just how much I don’t actually “use” it. It’s just there, protecting my home and my kitchen from the dangers of everyday life.

It’s something that Nest touches on in its promo video for the Protect, and something I immediately found myself feeling when I moved into this home. There were about 4 or 5 smoke detectors scattered throughout the walls of the house, but no way to really know how safe things really were. Did I need to replace all the batteries in all the alarms just in case? Were these old plastic things going to work even if I did? I found myself feeling exactly what Nest describes in their almost three year old video: “Is that thing even working? Oh, it just blinked red. Is that bad?”

Long story short, I’ve found that having a Nest Protect solves this problem. Just like a traditional smoke or CO detector, it sits on the wall entirely quiet 99% of the time. The biggest difference with getting a Nest Protect is that you always know exactly the status of the detector, and that peace of mind is priceless. After all, a smoke detector pretty much has one job, right? If you aren’t entirely confident that the cheap one you have hanging in your kitchen is going to do its job in the most serious of emergencies, why have one at all?

Nest is clearly aware of this, because there are multiple aspects of the Protect that revolve around simply reassuring you that all is OK. For one, if you open up the Nest app and tap the Protect, you’ll be immediately presented with a summary of systems and a message that “Everything is OK.” (or not). Sensors, the alarm, voice, battery, and Wi-Fi can all be checked regularly. The power, sensors, and WiFi are checked every day automatically. On top of this, the “nightly promise” flashes the green ring when you turn your lights off for the night to give you a glance-able assurance that it’s doing its job.

You can also manually click the physical button at any time to test the alarm, something the system walks you through on first set up. Again, just like everything else I’m talking about, you’re probably not going to do this often. But if you’re leaving for a weekend or otherwise have reason to believe things might be awry, it’s nice that you don’t have to fumble through your phone if you don’t want to.

If things aren’t okay (WiFi, battery dead, etc.), the way Nest Protect lets you know is also a practical luxury compared to traditional systems. You just get a notification on your phone. And there’s no annoying chirps letting you know the battery is low. This was a particularly appreciated aspect for me, as someone who spent many sleepless nights as a child listening to chirps for weeks on end. 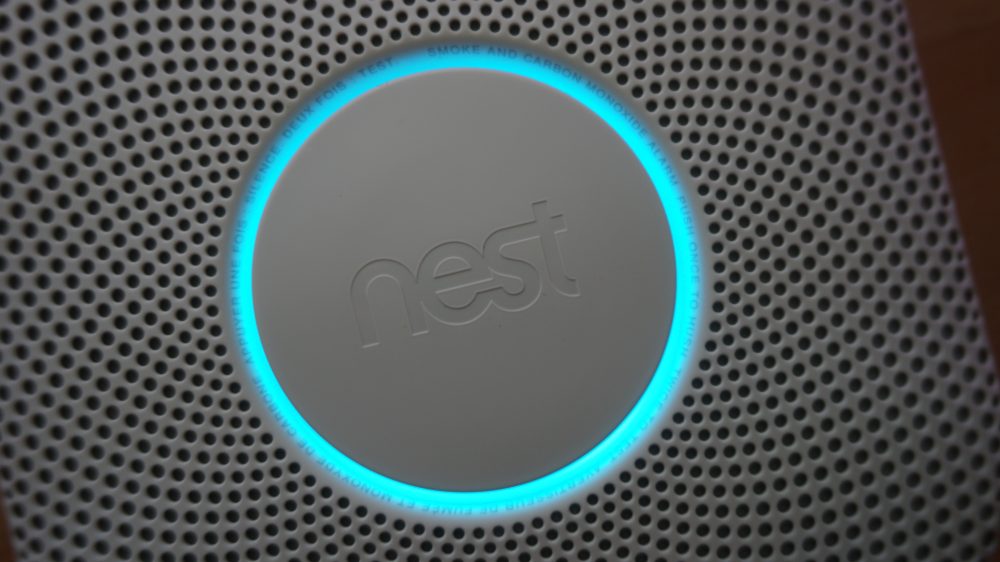 The other way to avoid battery-related problems with the Nest Protect is to simply get the wired model, which I did not opt for, unfortunately. Since I would have had to install new wiring in my home to go that route, I went with the battery-powered model. As mentioned, though, the way it goes about letting you know that things aren’t working is friendly, and Nest claims that even the battery-powered model can last a long time. I’m not sure how long, though, and the Nest app doesn’t really give you any estimates. Just assurances that things are fine.

I can’t speak yet to how well the system works when there’s actually an emergency, but that’s okay with me for obvious reasons. Perhaps (but hopefully not) I’ll be able to expand on this topic as well in a future Nest Diary. I did, though, try out burning some toast, and loved that I could tap a button on my phone to let the alarm know that it didn’t need to sound and that it was just me being a fool.

Beyond its obvious function as an excellent smoke and CO detector, though, there’s one far simpler feature of the Nest Protect that I have infinite praise for, and that’s the built-in ‘Pathlight’. I’m just so impressed with how much thought Nest put into making the most of this thing’s hardware. I’ve long been the kind of person to leave the stove light on all night in case I need to get up for a glass of water, and I don’t have to do that now that my Nest Protect is hanging on the ceiling.

Basically, the multi-function light ring will light up white when it senses movement in the general vicinity. Actually, this is a side effect of owning a few other Nest products that I didn’t initially anticipate; the Nest Guard base station for the Nest Secure system also lights up when you walk by it, and of course, the Nest Thermostat E, which I wrote about previously, also serves this function. Neither of those, unlike the Protect and Nest Detect sensors, are technically ‘Pathlight’-enabled. But they serve the purpose. Together, these devices let me roam the house at night without disturbing my wife by turning the lights on.

As a side note here, I think it would be awesome if Nest could add ‘Pathlight’ feature to the Nest Cam IQ. It would be great if the ring around the front of those cameras could illuminate when the presence of a person is detected in the night — it would add a couple more night lights to my existing setup. I could imagine a setting that allows you to have this feature enabled between certain times of day to make sure you’re not being annoyed by it during the daytime. Obviously, this has become one of my favorite aspects of owning Nest products, and I think they could expand it even further. 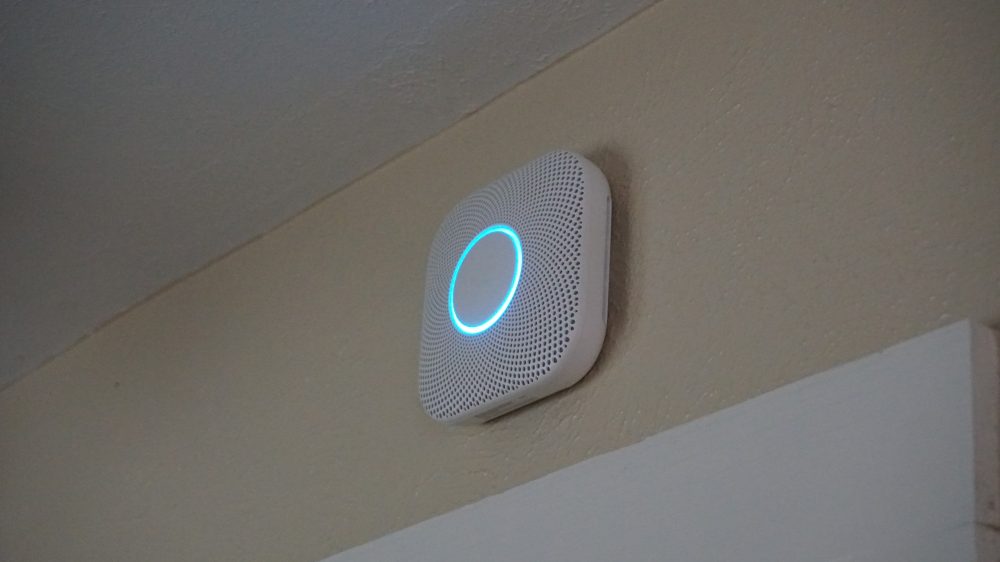 If you buy and use a Nest Protect alongside other Nest products like the Nest Cam IQ and Nest Secure like I have, and with that you retain the longstanding assumption that fire and CO detectors are for some reason supposed to be cheap, you might find yourself feeling like the Protect is a little overpriced. For a few reasons, I think the Protect is more than worth its $120 asking price.

You have to remember that, like many smart products entering our lives, this is a passive product. You’ll feel like you aren’t “using it.” In reality, I think the Protect is just as useful as its siblings, because for every second you aren’t “using it,” it’s doing the hard work of watching after your home, and doing so in a way that’s unlike typical systems: unintrusive and helpful. With Nest Protect, at least in my experience so far, you get a handy night light, tie-ins with other Nest products, no more annoying chirps (!!!), and most all, peace of mind, for what I think amounts to a relatively small investment.

If you’re someone who might worry about the newfangled technology aspect to something that just needs to be simple and get the job done, I think you should rest assured that Nest Protect will be just as reliable, if not more so, than the detector you have currently. While all these features are nice, all the Protect needs to remain a functional smoke and CO detector in emergencies is a good battery or power line. You’re not going to be left unsafe if your WiFi connection goes out.

All this said, Nest Protect is about 5 years old at this point, and I know that while these experiences are entirely new to me, they might be obvious to those that have been smartifying their homes for several years already. But for those who are late to the game and in the same boat as me, I think hearing about them would be helpful. I’m happy with the Protect, and I think you would be too.

What do you think about Nest Protect? Let us know your thoughts on Protect and this Nest Diary series in the comments.

Other entries in this Nest Diary: