Samsung unveils the Sunrise Gold & Burgundy Red Galaxy S9/S9+, but they won’t reach the US 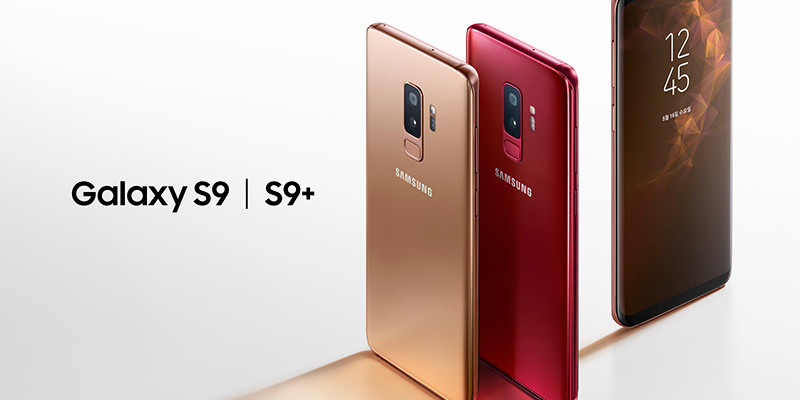 Last week Samsung quietly started selling a Burgundy Red Galaxy S9 and S9+ without any sort of announcement. Now, the South Korean company has officially announced the new color alongside a Sunrise Gold.

Just like in years past, once Galaxy smartphone sales begin to dip, Samsung likes to introduce new color options that might entice new customers into purchasing its hardware. This year is no different.

With this announcement, the flagship handset can now be picked up in six different colorways including Midnight Black, Titanium Gray, Coral Blue, and Lilac Purple.

Below is a quick description of how Samsung describes each of the new colors:

The Sunrise Gold edition for Galaxy S9 and S9+ is Samsung’s first device to feature a satin gloss finish which wraps the smartphone in a tranquil glow and glimmer. The new Sunrise Gold color creates a feeling of both vibrancy and calm. This sophisticated finish was developed to appeal to all users by bringing a stylistic touch of high fashion and urban interior design to a user’s mobile device. The Burgundy Red edition is one of the deepest red colors available featuring restrained gloss for added density and a look that is contemporary and traditional – perfect for users who appreciate luxurious design.

As expected, Samsung will only be releasing the Burgundy Red Galaxy S9 and S9+ in South Korea and China starting this month. The Sunrise Gold edition will go on sale in June, but it also won’t make its way to the US. Instead, it will be available in Australia, Chile, Germany, Hong Kong, Korea, Mexico, Russia, Spain, Taiwan, United Arab Emirates, and Vietnam.