Samsung’s bottom line has been struggling a bit when it comes to smartphones for the past few months. Now, sales figures are showing just how much worse the S9 is doing compared to its predecessors.

A report from The Bell reveals some troubling numbers regarding the Galaxy S9 and S9+. Apparently, these devices failed to sell more in Q2 compared to Q1 of this year. This is important to note because they were only on sale during Q1 for a few short weeks.

Samsung managed to sell about 10.2 million Galaxy S9/S9+ units during Q1, including both pre-orders as well as sales after the devices were available, generally. In Q2, though, the company only sold 9 million units over that three-month period. Of course, we’ve been hearing about Samsung’s sales having trouble for a few weeks now. 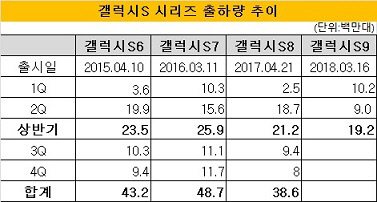 According to this report, Samsung decided to move up the release date of the Galaxy Note 9 because of these struggling sales. As we’ve heard previously, that release date will likely be August 24th, with pre-orders kicking off a bit earlier in the month. Samsung will officially announce the Note 9 on August 9th, possibly alongside its new wearable, the Galaxy Watch.