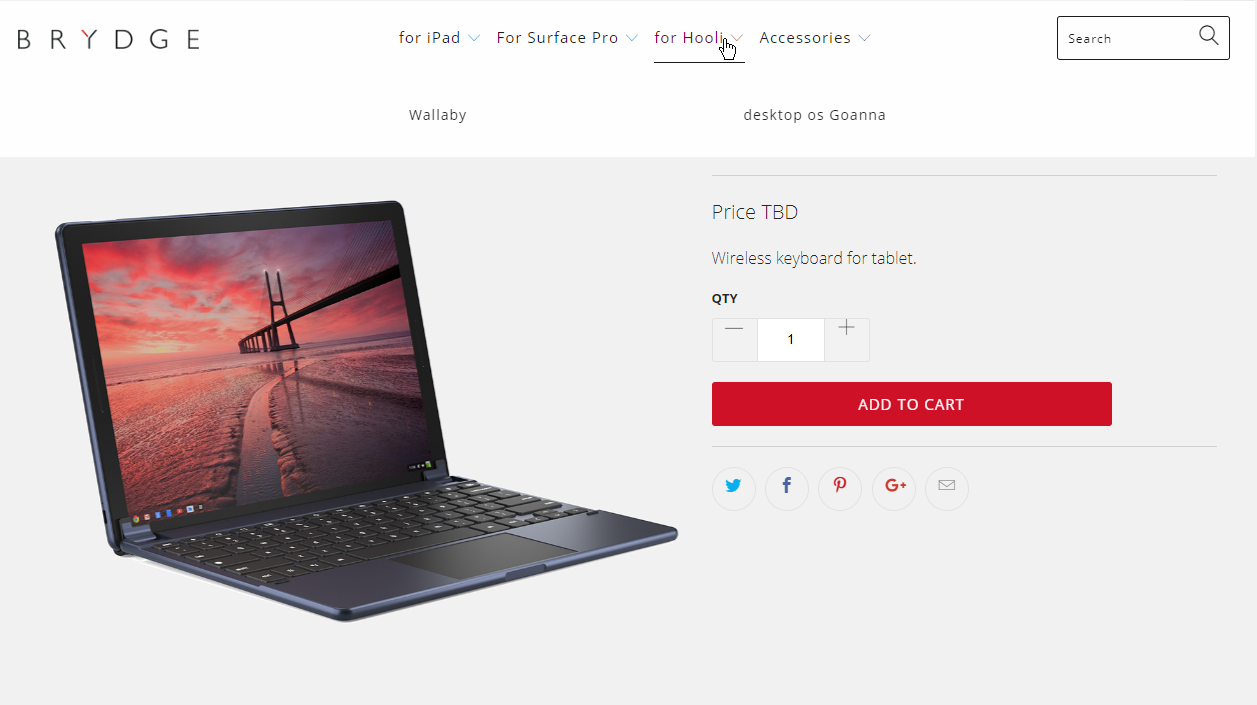 We reported earlier this month that Brydge, known purveyor of premium keyboards for tablets (especially the iPad), was getting into Chrome OS tablets. Now, a leak on Brydge’s own staging Shopify site reveals not one, but two keyboards in full — and what might be some new Google hardware.

The first keyboard you need to know about is called Wallaby, which our Kyle Bradshaw first mentioned on our Alphabet Scoop podcast last weekend. In that show, he pointed out that the mysterious Brydge keyboard we saw in Chromium at first had been renamed to Wallaby in the source.

The keyboard you see below is that keyboard, according to Brydge’s staging Shopify site (which has now been taken down — here’s the Google cache). These images were first spotted by About Chromebooks.

Perhaps unsurprisingly, the site says that this is a “wireless keyboard for tablet,” and the price is “TBD”. The category these keyboards are under on Brydge’s site is “for Hooli,” which you may know as the mock Google in the popular show Silicon Valley. (Other categories: “for iPad, and “for Surface Pro”.)

Second up is an another keyboard we’d never heard of before — this one interestingly described as for being for a Chrome OS desktop. “Wireless desktop keyboard for Chrome OS,” specifically. The Google cache for this Shopify page is also still live, and you can see it for yourself there.

Are these for a Pixelbook tablet?

Obviously, there are some big questions that these images leave unanswered. Is the device we see in the images for “Wallaby” the “Nocturne” Chrome OS convertible that we suspect is a Google product? Is it a generic render? Let’s unpack the evidence really quick for arguing both directions.

First, there’s the assumption that Brydge would only want to make these premium keyboards for a big name-brand manufacturer that’s planning to put a lot of marketing muscle into selling them. Brydge is pretty selective about who they partner with, and Nocturne is our best bet for a Google product.

Secondly, there are some things about the device you see in this render that are unique. The most obvious is the fingerprint sensor at the top-left of the frame that we saw referenced in some art that Google itself made for Chrome OS — which we’ve never seen on a Chromebook before. If nothing else, we know Nocturne has a fingerprint sensor, and this device does too.

Another thing is that the leaked Wallaby keyboard you see in this image has a Launcher key with the same icon as the home button that’s also in the same place on the first generation Pixelbook. The layout of the keyboard as a whole is identical to the original Pixelbook, too. The fact it doesn’t have branding on the front is yet another thing that would lean in the direction of Google hardware, too.

Obviously, the “for Hooli” description on Brydge’s site seems to suggest “for Google”, but that doesn’t necessarily mean that this image is Google hardware. “For Google” could just as well mean that it’s for Chrome OS as it would mean for first-party Google hardware launching next month.

I have to be honest and say that the biggest thing that points to this not being Google hardware is that it doesn’t really look like Google hardware — at least not to my eyes. It doesn’t seem to borrow any obvious design cues from Google’s currently-available lineup such as the sharper corners and edges of the Pixelbook, the bright colors of the resurging Italian design, or any kind of obvious glass window for instance. We can’t see the back, so there’s no obvious Google logo to tell us for sure either.

Another problem: If this is supposed to represent the “Nocturne” tablet that we suspect is Google hardware, it’s failing at including the necessary cameras. We can’t see any cameras on the front, and there are no obvious cameras on the back either. We know Nocturne has both.

Additionally, the screenshot laid on top of this supposed device is circa original Chrome OS — so it’s definitely not an official Google-sanctioned render. That, plus the fact that the color of the device matches the color of the keyboard perfectly suggests that this could just be a generic render of some kind that Brydge is using as a placeholder to represent any Chrome OS tablet.

One explanation that allows this to still be representative of Google hardware would be this being Brydge’s render based on Google’s CADs. Seems more than plausible to me.

What do you think? Do you think this is our first look at a Made by Google Chrome OS tablet?