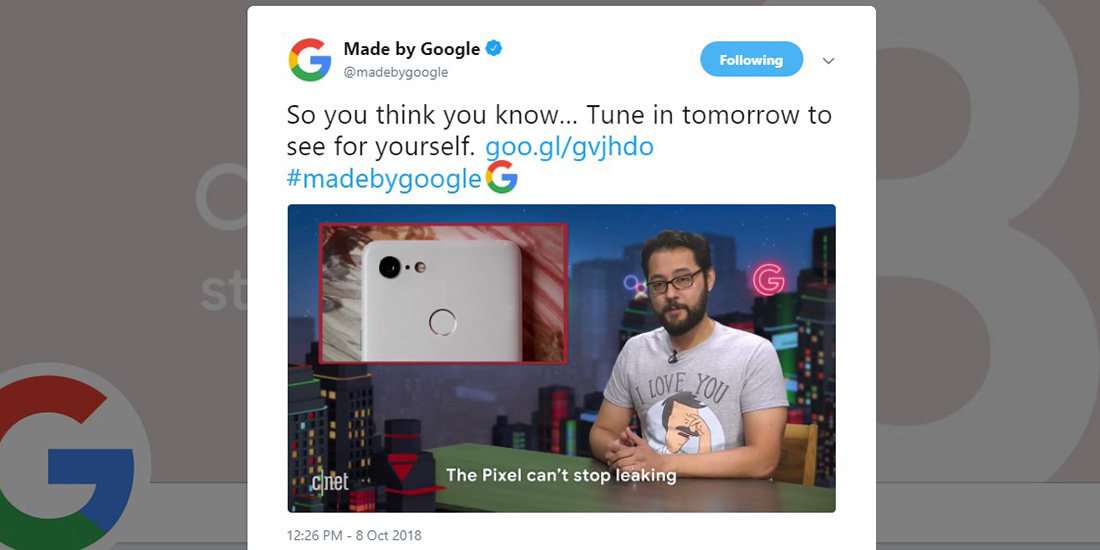 You’d have to be living under a rock to ignore the tremendous number of Pixel 3 leaks this year, and Google is fully aware of what’s been going on. Today, a brief teaser video was released on Twitter addressing those leaks, and maybe teasing some things we don’t know…

It should come as no surprise that Google is playing with the Pixel leaks as a marketing tactic. In a brief video on Twitter, the company pulls clips from a handful of tech reports and YouTube personalities to poke fun at the leaks. If you’ll recall, one YouTuber who was contacted about this sort of video talked about his involvement not long ago.

In the accompanying tweet, Google teases “So you think you know…” Of course, this has managed to stir up fans across the social network with plenty of speculation forming. Many users are pointing to this as Google saying we’re going to get some big surprises tomorrow, and as possible as that is, it’s probably not going to be a third phone or anything like that. Recent retail packaging leaks essentially rule that out.

Either way you want to look at it, it’s fun to see Google poking fun at these Pixel 3 leaks in a video like this. More than likely a similar video will be shown at the event itself ahead of the Pixel devices being launched. We’ll be at the NYC event with live coverage, so stay tuned!

So you think you know… Tune in tomorrow to see for yourself. https://t.co/4zTwRXcn1x #madebygoogle pic.twitter.com/3IO3xaMaP8