RED Hydrogen One unboxing and hands-on: This is big 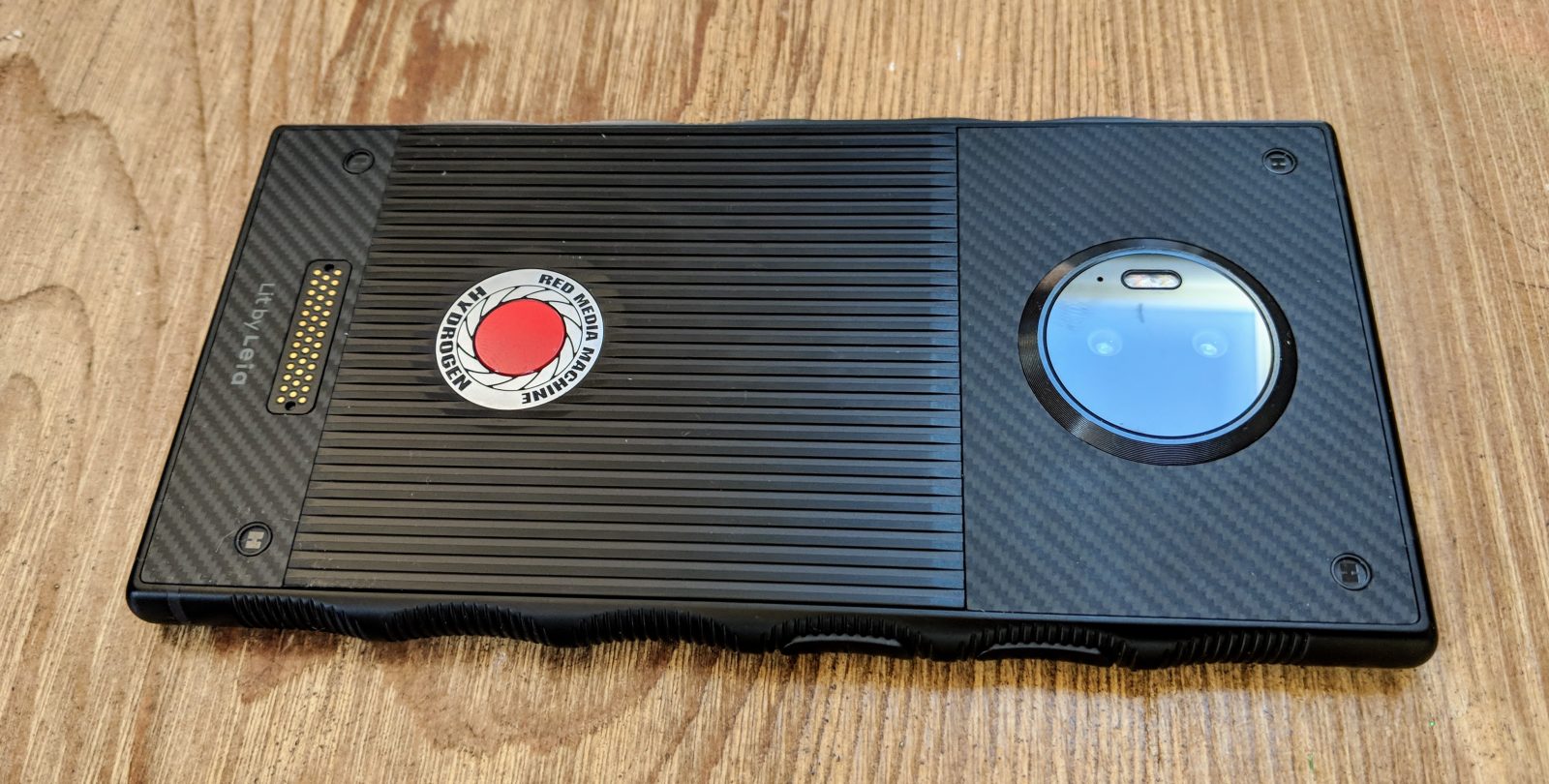 AT&T invited 9to5Google to a special RED Hydrogen One launch event last night with a keynote given by RED founder Jim Jannard. The evening didn’t disappoint with a moving rags to riches, against the odds history of Jannard’s startup exploits at Oakley, which went public in 1995 and sold out to eyewear monopoly Luxottica in 2007. In 2005, Jannard again went up against the establishment and started the RED Cinema Camera Company, which struck it big in the motion picture industry.

Act 2 from RED is the Hydrogen One Smartphone which, as we’ve seen before, is a gargantuan beast of a specs powerhouse. Its standout features, besides the size, are the 3D front and back cameras and screen, which we aren’t allowed to show you on our lame 2D website. But we can show you some new stuff here in our unboxing…

This is my first time with the RED Hydrogen One, and frankly I’ve never used one of the RED Cameras so I have little background in the area. My cameraphile friends all gush about the company’s cameras, though, so I feel like I’m walking on hallowed ground here.

Taking it out of the box, the RED Hydrogen One feels and reminds me of the HTC Evo 3D reinvented for 2018. Heavy, substantial metal weight and of course 3D display. We can’t show you the display until the embargo is lifted, but a lot has changed since the last 3D craze that brought us the Nintendo 3DS, the aforementioned Evo 3D, and untold numbers of 3D televisions. All (except maybe the 3DS) are long gone now, doomed to failure. 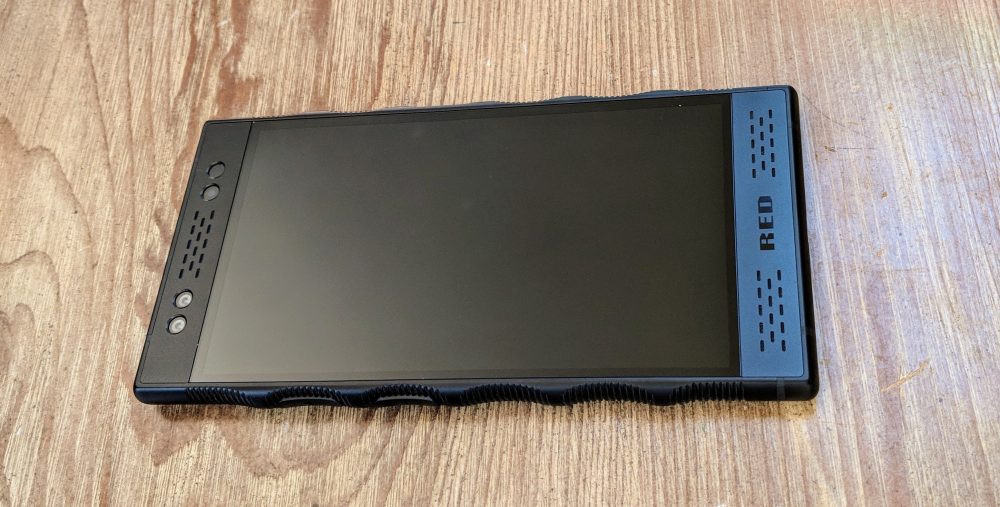 Jannard tells us the reason those products failed as consumer devices is that the displays made our eyes tired. The Hydrogen One won’t because it uses a different technology.

As is the embargo, we’re not allowed to reveal our feelings on this phone just yet, but it doesn’t take a mind reader to see that the RED Hydrogen One is a polarizing and interesting device in a world where just about every phone introduction is a small iteration on the previous year’s model. 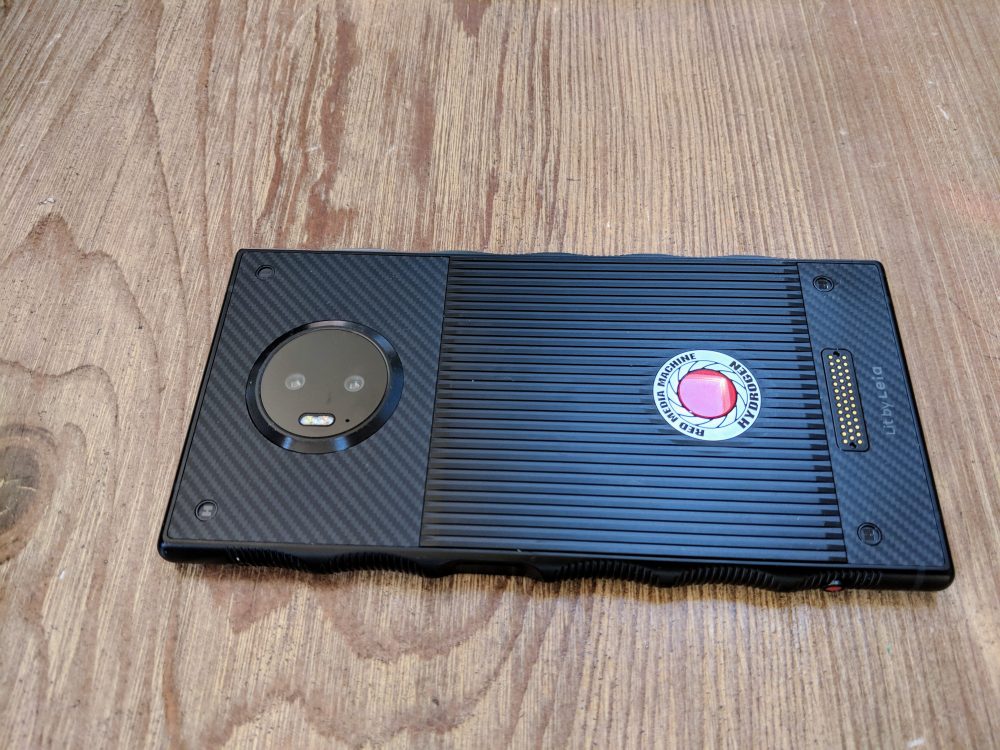 You’ll also note the three rows of connectors on the back, as seen above. Those are for mods, and while Essential, LG and Moto have tried and failed with these, RED promises cinema type camera and high-end audio mods which are going to be tempting to RED’s camera fans.

Did I mention the phone was heavy? Jannard makes no bones about stuffing a monster battery in this thing and wrapping it with the type of protective metal that scoffs at a case. In fact, most people who see this thing will think you’ve slapped a badass super tough case on it. The Hydrogen One has dual front and rear cameras for those three Ds, but more interestingly to me, it has ridged scalloped edges. This grip makes you feel almost like you are holding brass knuckles, looking for someone to clock. The substantial weight and strength of the shell could probably be used to hammer in a nail, but I’m going to let someone else try that out.

It feels great in the hand but probably less so in the pocket – and on your pocketbook.

As this is a RED phone and AT&T is getting into the movie industry with its recent pickup of WarnerMedia, there will be tie ins that include free full length 3D movies “Ready Player One” and “Fantastic Beasts and Where to Find Them,” which come with the phone. Warner was on hand at the event to tout the relationship. We’ll see if it bears fruit beyond the 15 or so currently planned flicks.

Will it be a success?

It is hard to argue with Jannard’s long career of success, but the smartphone graveyard is littered with the tombs of unsuccessful companies. I think it all hinges on the differentiators being enough to build a market. The price ($1299 Aluminum – $1599 Titanium) will be near a top end iPhone, which is already stratospheric compared to prices just a few years ago. But I don’t think the price will be a distraction for potential customers in this demographic.

Will the top end features sell? Jannard, like another entrepreneur who entered the phone business from an outside field, says he only needs to capture one half of 1% of the market to be successful. The smartphone market is so big that even owning a part of a percentage point can be seen as a success.

We’ll have to wait a few weeks to dive deeper, but if nothing else, this is at least an interesting device that we’re super excited to get our hands on.

Take a look at some of the unboxing pictures below along, with some takes from the event. We’ll have more on this phone in the coming weeks.