Hands on: RED unapologetically wants the Hydrogen One want to be a consumer device

Almost a year ago, RED announced the Hydrogen One with a focus on modularity and accessories to serve professionals, as well as a “holographic” display for 3D content consumption. The former feature alone could be a significant justification for why this phone exists, however, what goes unrealized is that RED actually wants to create a consumer phone.

The ambition is readily lost in the narrative of the past 11 months where there have been delays, skepticism, a slow trickle of specs, and relatively few hands-on opportunities. However, in talking with RED founder Jim Jannard today, that goal is a very real and genuine one.

The argument for consumers is primarily centered on the holographic display and how RED is offering the first good, mobile implementation, with that screen opening up 3D content consumption now and other uses heading into the future. The hope is that the genuinely differentiating feature, coupled with design, could put RED in the running as a manufacturer of a more unique variant of the most important device in our lives.

In creating the phone, RED’s first focus was on the modularity system. This concept has served the company very well on its cinematic cameras beyond the traditional lenses. For those unfamiliar, Red sells a “brain” that contains just the sensor that can be augmented with dozens of modules like a display and audio capabilities.

With the Hydrogen One, one of RED’s first modules will be a large sensor and mount that supports lenses from across the professional spectrum. The idea of making the phone the new “brain” is a good one and powerful for making the camera an always-connected device that is guaranteed to always be with the user and capable of pro-level work.

We did not get a hands-on with the system, but there are pogo-pins at the bottom of the phone, not too dissimilar from the Moto Z, with that camera sensor covering the entire rear of the device when it launches.

Through and through, the Hydrogen One feels like a gadget. That might sound like I’m stating the obvious, but it feels like I’m holding a piece of rugged technology that you’d expect to see in sci-fi as a handheld device used in the field. Larger than the Pixel 2 XL, it is devoid of curves to hide the true size of the device, but compensates with grips commonly found on aftermarket survivalist cases. As my colleague Justin Duino points it, actual rubber would probably have served the phone better.

There are four distinct grooves on each side that contain further textured ridges. On the left-hand-side, volume buttons are inlaid into the top two “scallops,” as the company calls them.

Surrounding the display are sizable bezels that house dual-facing cameras above and slits for speakers below around the “RED” logo. We were, unfortunately, unable to take a picture of this due to the company’s curious and long-standing policy.

Meanwhile, due to it being crafted from aluminum or titanium, this is a heavy device. I’d equate the weight to one and a half Pixel 2 XLs. However, as we get lighter and lighter phones, I found myself enjoying the rare heft of the Hydrogen One. I doubt it’s practical if it were just a smartphone — putting it up to your ear to take a call would look ridiculous — but this feels like a phone that will survive through thick and thin.

The design is different and l believes that this aspect could play a minor part in consumer interest for a phone that looks different from the current field.

With equal fervor, RED is pursuing and hyping the holographic “4V” display found on the Hydrogen One. The company believes that this differentiation will be a — if not — the talking point for consumers. Acknowledging that past efforts on 3D displays were bad, RED’s effort is backed by technology that is genuinely a step forward.

The holographic “4V” mode is powered by a layer underneath the regular 5.7-inch 2560 x 1440 LCD that can recreate light fields. Synonymous with holograms, there are two aspects to light fields, or the capture of how light bounces off various surfaces in a scene. If successfully recorded, the resulting content can feature motion parallax and extremely realistic lighting.

The second aspect is displaying and recreating this light field. That special layer on the Hydrogen One is able to project an image in multiple directions to create an object (or rather a miniaturized version) that somewhat appears to protrude from the 2D surface that is the screen.

The end result in the case of the Hydrogen One is the ability to moderately tilt your head side-to-side, up/down, and see that scene as if it were really right in front of you. In demos we’ve head, the effect is readily apparent in a way that past phone-based experiences were not.

Again, RED’s innovation is one of technology maturing since the days of the Amazon Fire Phone and the Evo 3D. In the 4V layer being underneath and not above the main display, this addition does not come at the expense of a good display for the majority of usage. The fact that this phone can do holograms, technologically, does not detract from the experience of this phone.

The experience does not scale beyond a single viewer experience, but RED argues that watching video on a phone is mostly a solitary experience. The effect is not a game changer, it’s just better and something that RED can be proud of.

RED CEO Jim Jannard thinks this aspect of the phone is what will draw consumers in. From watching “immersive” content to having video chats where you can see the person with depth, the hope is that curious phone buyers will be interested in at least entertaining the Hydrogen One given the current slate of options.

In talking to 9to5Google, Jannard emphasized the stagnant state of the smartphone industry. He — with the outsider perspective RED brings — is coming to the scene where the biggest drama is seemingly over the notch and before that the headphone jack. The Hydrogen One, unsurprisingly, features the latter.

Meanwhile, he is correct in pointing out that portable holograms have not been done well in the past. The proliferation and availability of any new technology opens up the possibility of use cases that can’t immediately be realized until it’s in the hands of developers and a broad audience.

However, RED is asking a lot of the average consumer who may just want a standard, no frills phone from a company with an established track record given the criticality of, again, the most important device in our lives. The co-launch between AT&T and Verizon is important in making sure there are units in the real world that consumers can try out. This experience of whether 3D is for you needs to be tried in person.

Unapologetic in the desire to create this device, Jannard and company equally realize their newness to the entrenched phone market and realize it might not succeed for the reasons they’re projecting. The CEO thinks there is a demand for this phone and at the end of the day, I think there is.

However, success won’t be found in the consumer market — as my colleague Justin argues — especially if it’s primarily just due to the holographic display that today has such a limited natural audience that would naturally be interested in it. Somewhat conservatively, success could be found in the professional market where adding always-on connectivity on a camera that could be significantly better than the Pixel 2 and iPhone cameras is powerful for all kinds of content. 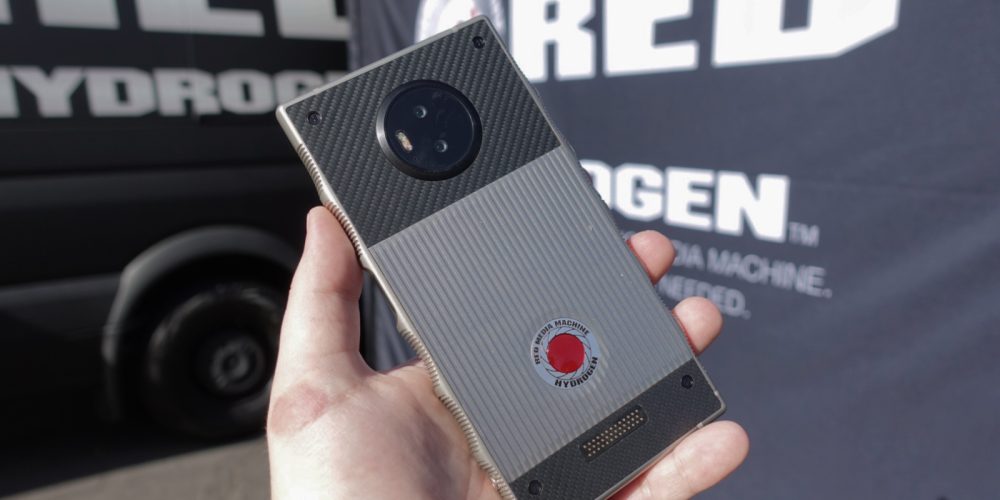