Review: The Huawei Mate 20 feels like an appetizer to a more feature-packed main meal [Video] 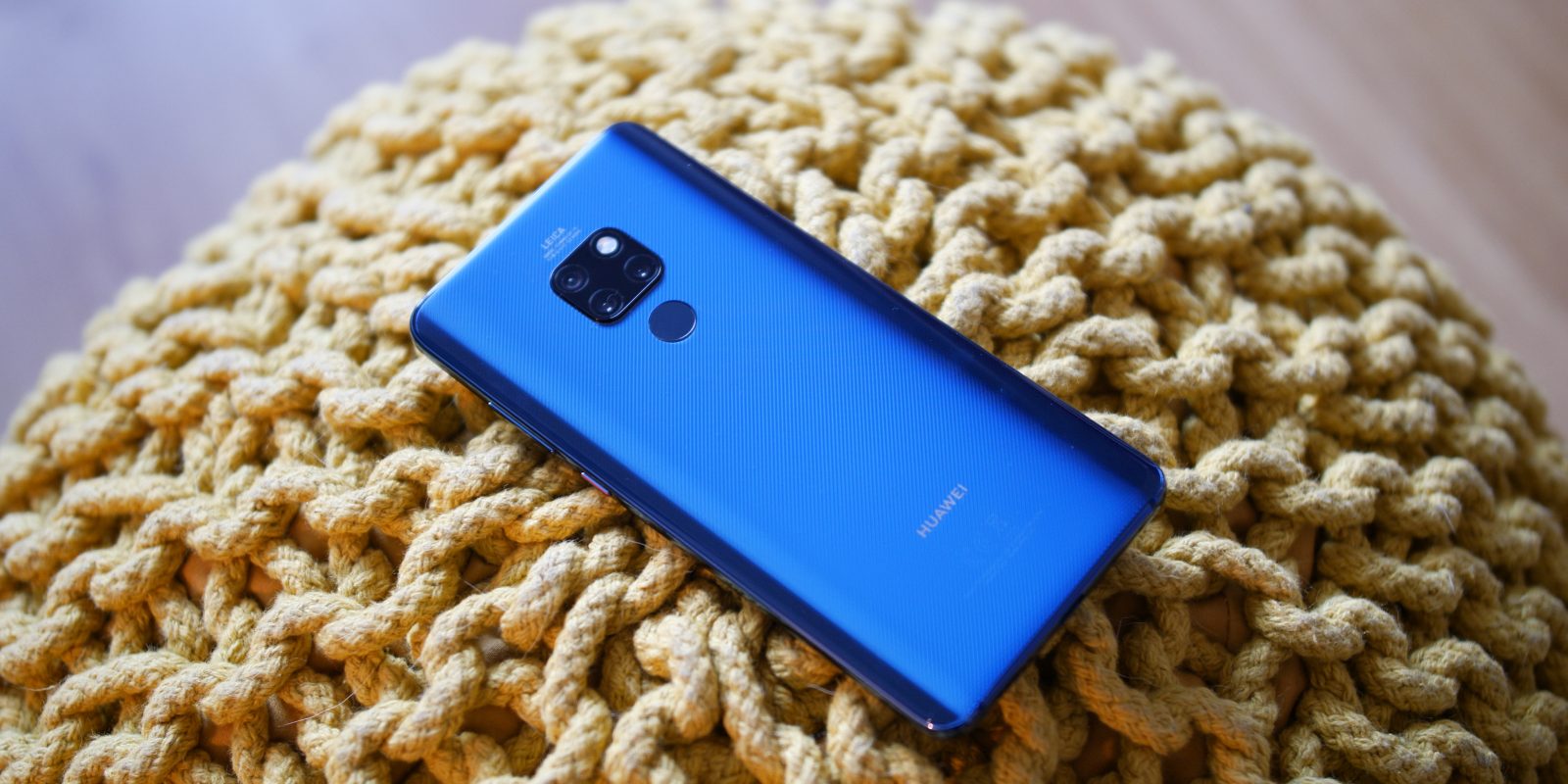 After Huawei announced the Mate 20, it was soon overshadowed by the more appealing Mate 20 Pro. It’s literally that fact that makes you wonder why this smartphone exists in a world inhabited by the Pro version. In boxing terms: the standard Mate 20 feels like a preliminary fight before the main event.

Having used the Mate 20 Pro extensively since launch, the device is absolutely fantastic. I can’t say I am a fan of the EMUI skin dripping from every orifice, but it’s a truly ‘complete’ smartphone that makes almost no compromises.

Where the standard Huawei Mate 20 differs is in this compromise aspect. Features are removed or stripped down to potentially justify the Pro model existence — or at least it feels that way.

Although with that said, there are a few things that have been removed from the Mate 20 Pro and remain on the Mate 20. The headphone port is a major input port that hasn’t seen the chopping board. There had to be some cutbacks, especially at a more wallet-friendly price tag — although it is only a few hundred dollars less — I probably shouldn’t complain too much about certain omissions.

Whilst there is a price difference, both the Mate 20 and Mate 20 Pro pack Huawei’s new Kirin 980 chip that uses the same 7nm process as the A12 Bionic chip found in the Apple iPhone XS.

The Mate 20 also comes as standard with 4GB of RAM which can be upgraded to 6GB. Combining that powerful processor and RAM combination means great performance whether multitasking or gaming.

On top of that, you will be able to multitask and game for a ridiculously long time thanks to the massive 4000mAh battery that comes stuffed inside. It’s charged via USB Type-C too, more on that later though.

As for ports and extras, there might not be an in-display fingerprint reader, but there is a standard fingerprint reader on back. It’s much faster than the in-display option, but I don’t like the lack of feedback when using it to unlock the smartphone. The display just powers on with no haptic feedback or audible cue. 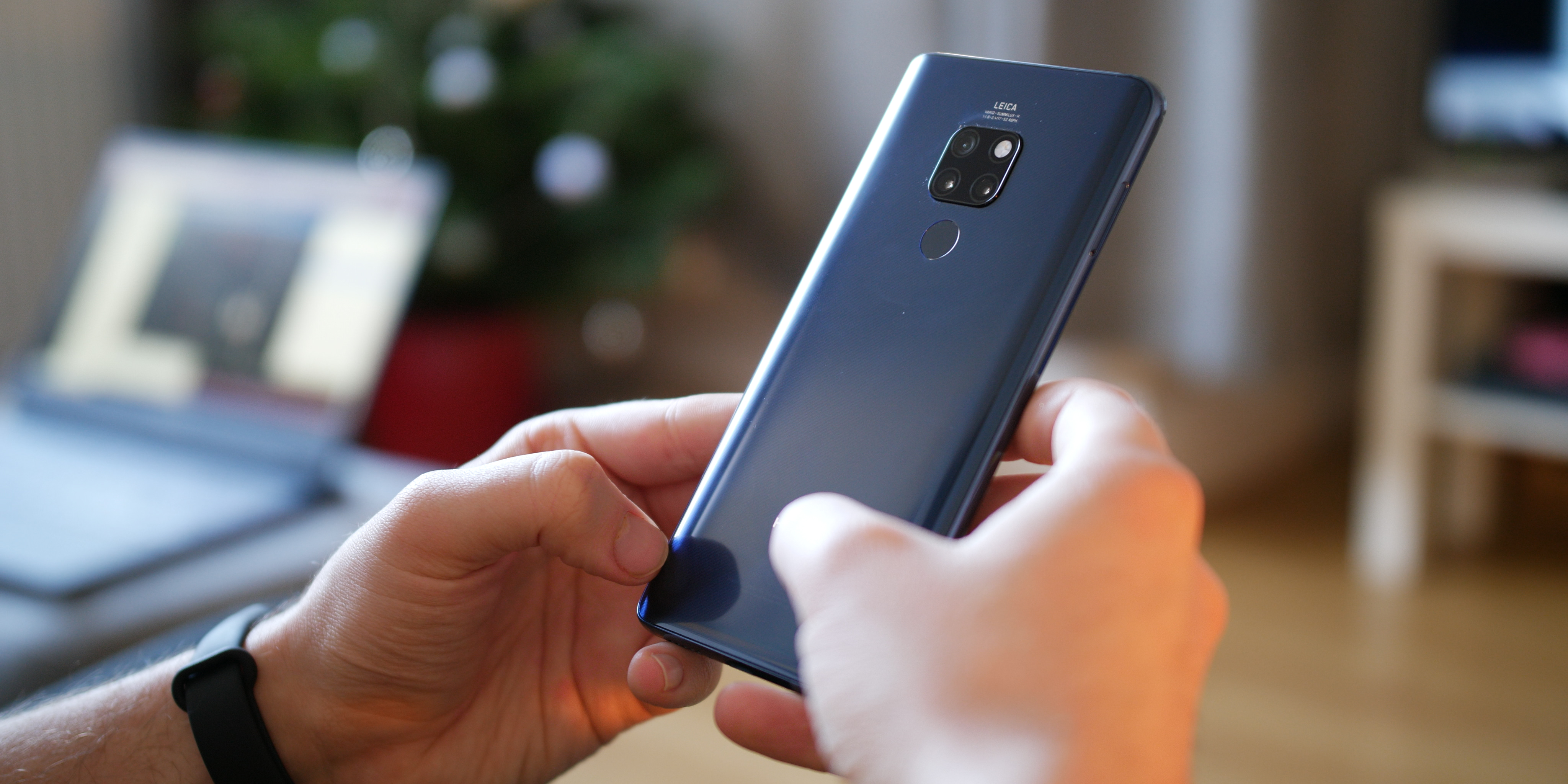 Although the devices share a name and some innards, the Mate 20 and Mate 20 Pro have enough design differences to really differentiate the two. For a start there is no IP68-rating, instead the Mate 20 only has an IP53-rating. This means the device is only splash-resistant —  so be especially careful near any bodies of water.

This is an objectively large smartphone, one that seemingly plays it safe on the design front. I do like the flat screen and curved back design. Curved displays are great, but are often underutilized in everyday usage. A flat display is a sound choice in my book.

With a curved backplate, you are offered a reassuring comfort when held, which is especially important with such a large handset. My review unit has that excellent textured finish that feels extra grippy and is supposed to be more scratch resistant.

The contrast of flat and curved is my preferred design style, I can appreciate a fully curved device, but I do like a flat screen. A flat display is great for putting face down on a desk and especially on a nightstand.

I do really like this IPS panel even despite it only being FHD+. Size-wise, the screen clocks in at 6.53-inches and includes a tiny waterdrop or teardrop notch. On such a large display, the notch feels somewhat smaller by comparison. Although it must be said that it gets nowhere close to the sharpness and clarity of the AMOLED panel found on the Pro.

With an 88% screen-to-body ratio and 18.7:9 aspect ratio, if media consumption is your primary usage, then I am sure this device will be a great companion. I wouldn’t say it is the most pin sharp at 381 pixels per inch, but it is significantly higher than that of the iPhone XR. Add that to an HDR10 certification and you can expect even better video viewing.

I love how small the bezels are, the notch helps aide these small bezels and ends up feeling much more like a slab of display. If I am completely honest, I haven’t really missed a QHD display at any point during my time using this device and I’m sure you wouldn’t either. 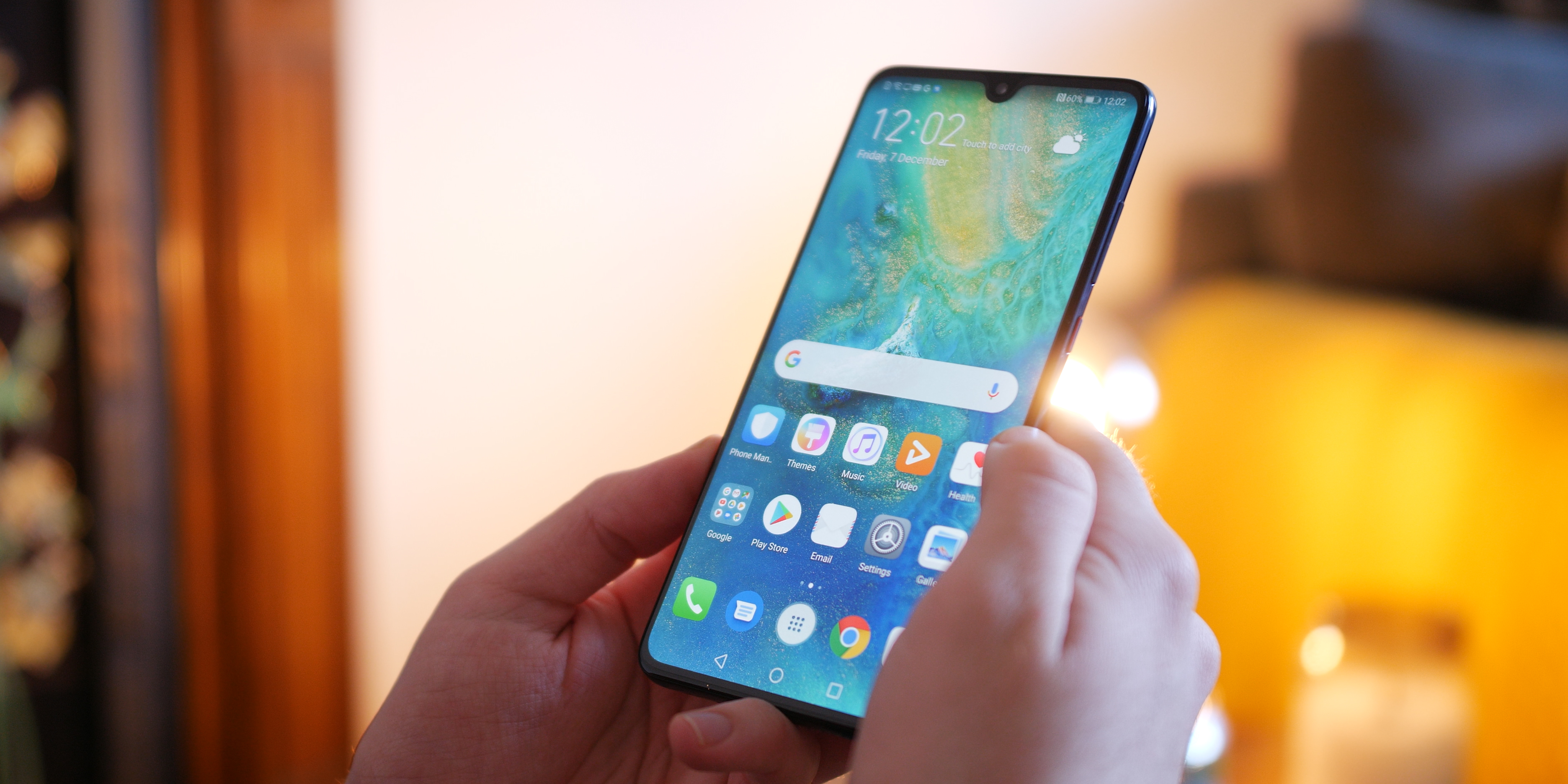 One of the major double-edged swords for me with the Mate 20 and by extension the Mate 20 Pro has to be the software. Android 9.0 Pie is fused into the heavy EMUI skin exclusive to Huawei. It looks and feels fast, but is hindered by the iPhone-wannabe rounded rectangles and touches that don’t feel completely cohesive.

Out of the box, EMUI has all of your applications in a paged layout but that can be changed but feels as though it has been set that way as standard to replicate iOS.

I am still not a massive fan of the accents and stylings of EMUI 9.0. You may be, but for me I don’t understand why brands can’t just stick to the stock icon set. These tweaks don’t stop menus, apps and overall performance from being excellent.

Even though the cosmetic alterations are quite heavy, Android 9.0 Pie is under here. Although I don’t like the Huawei navigation method implementation all too much, it runs just as you would expect it to. 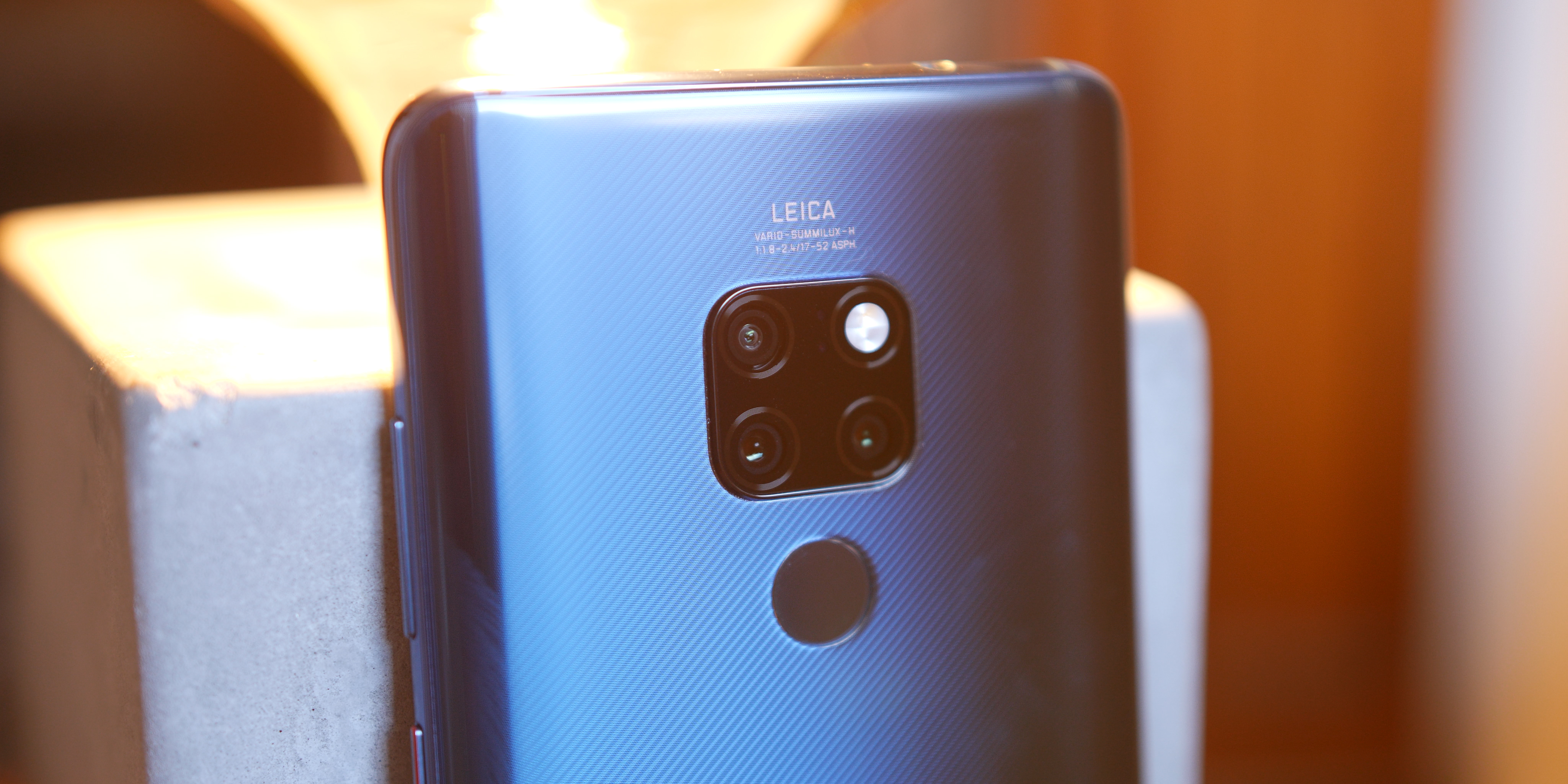 The stove top lookalike camera array is present on the Mate 20, but here we see some of the biggest downgrades over the Mate 20 Pro. It remains the same style of array, but with slightly lower specifications.

We’re talking about a 12-megapixel f/1.8 standard lens, 16-megapixel f/2.2 wide-angle lens and an 8-megapixel f/2.4 telephoto lens. Round front, the single camera in the teardrop notch measures in at 24-megapixels with an f/2.0 aperture. It’s also worth noting that the telephoto zoom is limited to 2x zoom and not 3x like on the Pro. There is no optical image stabilization either.

The camera is still superb given these minor downgrades and it most definitely is not to be taken lightly. You get so much versatility for how to take a photo given the three distinct sensors. I’ve found myself using the wide-angle lens almost every single time I want to take a picture. You might not find a use for wider shots, but it’s such a great option to have right from the get-go.

Night photography is still exceptional thanks to the inclusion of Night Mode on the Mate 20. I still feel images have a something like a Gotham City vibe. But this long exposure mode remains superb even on slightly lesser hardware, and the camera options here are pretty comprehensive.

Video recording modes are a little less all-encompassing. Yes, there is 4K recording at 30fps, 1080p at up to 60fps and slow-mo 960fps at 720p. The front-facing camera is only capable of 1080p 30fps video recording. I found it to have a jello effect when recording in FHD at least.

An issue I did notice when putting together the video review was how the video from the Mate 20 camera would not playback on my laptop or PC. Instead, it would fail to play and wouldn’t work when thrown into Premiere Pro. I believe this might be a container issue, but it is something I will put to Huawei in the coming days.

Huawei has been killing it in the battery life stakes thanks to the last few releases. Not only does the 4000mAh battery absolutely power through a day with upwards of seven hours of screen on time, but it charges super fast thanks to the charger in the box.

You can go from 0 to 60% in around 40 minutes thanks to the Super Charge 22.5W charger. It’s impressive in person, but it doesn’t quite match the 40W charge found in the Pro model box. That said, it is still stupidly fast when you consider the total size of the battery.

If you aren’t glued to your device all-day, I can honestly see the Mate 20 being a two-day device with zero problems.

Whilst the Mate 20 is a great phone and does have enough key differences between it and the Pro, I still don’t understand who this product is aimed at. If you have a slightly lower budget and don’t care for having the best camera, extra augmented reality features and an in-display fingerprint reader you might pick this over the arguably better Mate 20 Pro.

The specifications seemingly sit in the middle ground between fully fledged a flagship and powerful mid-ranger. The smaller notch seems at odds with what other brands are trying to do with their flagship lines. Huawei should have this smaller option on the more expensive Pro model in my opinion. But then again, this device lacks all of that 3D depth sensing camera tech which has led us to this notch system in the first place.

If the inclusion of the headphone port, a well-placed rear fingerprint reader and larger display — albeit 1080p — are preferred then this really is a superb device.

As good as the Mate 20 is, it will always live in the shadow of the exceptional Mate 20 Pro. When you factor in the pricing, it becomes clear that unless you are able to get the device on a cheap contract — unlikely as the Mate 20 is only available officially in select markets — then I would always suggest choosing the Mate 20 Pro instead.

Where to get the Huawei Mate 20

Where to get the Huawei Mate 20 Pro

*Please note that as these devices are not officially available in the United States and therefore may not come with any warranty or guaranty.