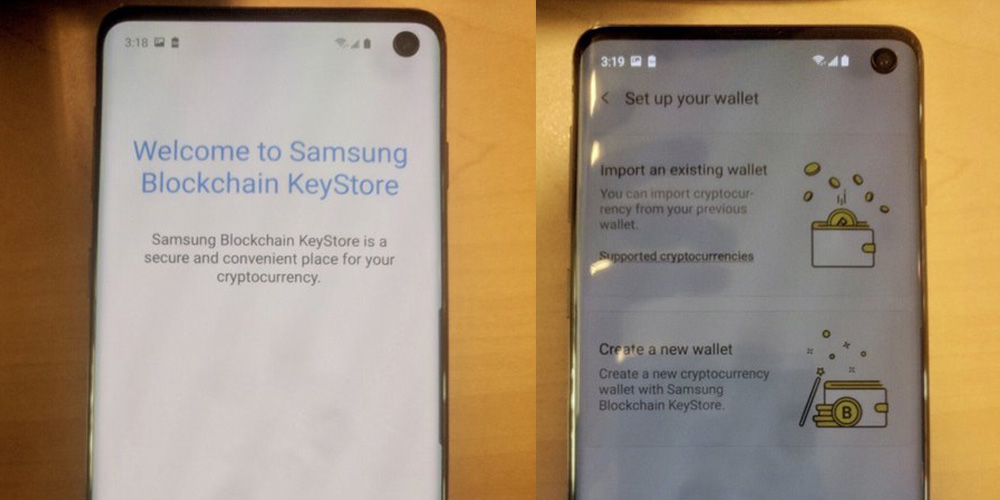 In just a few weeks Samsung is going to show off its all-new Galaxy S10 family. Today, a new set of hands-on images have leaked out showcasing the standard Galaxy S10 variant, including a first look at the company’s new cryptocurrency wallet, Samsung Blockchain KeyStore.

First posted by @VenyaGeskin1 on Twitter (via SamMobile) these new Galaxy S10 images don’t give us a ton of new information as regards the hardware in question. As expected, we’re getting slim bezels on all sides with a punch-hole cutout from the “Infinity O” display. Notably, this is the standard Galaxy S10 which only has one front-facing camera within that punch-hole rather than two as the S10+ will hold.

One thing I quickly noticed with this image was how the status bar is handled. There’s a loose gap between the camera and the battery icon, but I can already tell that a right-mounted punch-hole is preferable to a left-mounted one as we’ve seen on some other devices.

On full display in these images, though, is a new cryptocurrency application Samsung is seemingly going to be launching with the Galaxy S10. The “Samsung Blockchain KeyStore” is described as a “secure and convenient place for your cryptocurrency.” Users can apparently import currency from other wallets or create a new one with the app. The build shown here only supports Ethereum, but presumably at launch it would also support Bitcoin and other popular cryptocurrencies. Another screenshot also shows that the KeyStore can be secured with biometrics.