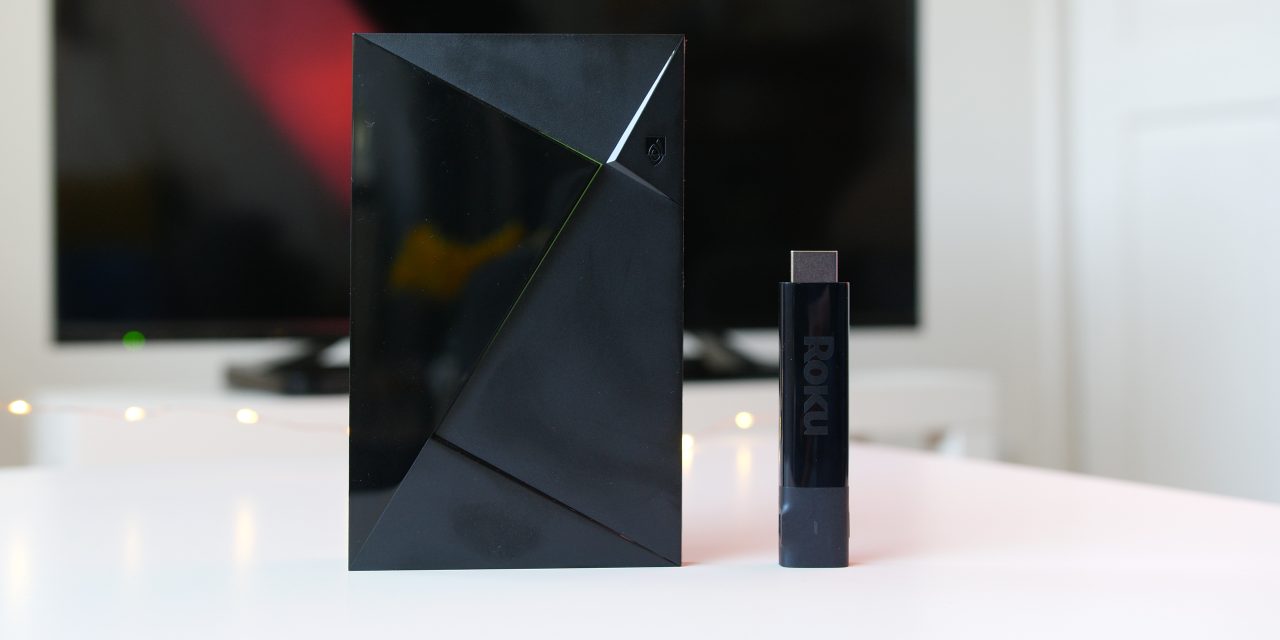 There are a few home streaming options for anyone looking to cut the cord and move into the world of online content streaming. The problem is that not everyone initially knows what to look out for.

Roku makes some of the most popular streaming devices on the market thanks to low entry costs and simple user interfaces. It also helps that they support a lot of the most common streaming platforms, including Amazon Prime Video — something severely lacking on most Android TV and Chromecast devices.

The problem for most people is that there are a staggering seven Roku streaming devices currently on the market, but only one that really makes sense if you ever plan on consuming 4K content.

If you’re willing to delve into the world of Plex and Kodi are looking for an all-encompassing option, then we’re sure that the Roku Streaming Stick+ and Nvidia Shield TV will no doubt have appeared in your search results pages.

Naturally, the price of the two devices is one of the reasons you might be looking to justify (or not depending on your persuasions) either the lower or higher cost to yourself. Follow along, and we can help you make that decision.

I have owned older Roku devices (the Roku 2 XS to be precise) and the design has altered little since the early days of the company. The black and purple design is a signature design and one that the Roku pulls off well.

The Roku Streaming Stick+ has more in common in the hardware stakes with the Google Chromecast but because of its features, it does go toe-to-toe with the Nvidia Shield TV. The small HDMI dongle looks like a simple USB thumb drive and requires what Roku is calling an ‘Advanced Wireless Receiver’.

It can then connect via a mini USB — not a micro USB — cable to the supplied power brick or simply take power from your TV set. The only problem with that route is that it takes a little longer to boot via that method. It’s also worth noting that you need to have the receiver cable connected otherwise you’ll get connection errors. 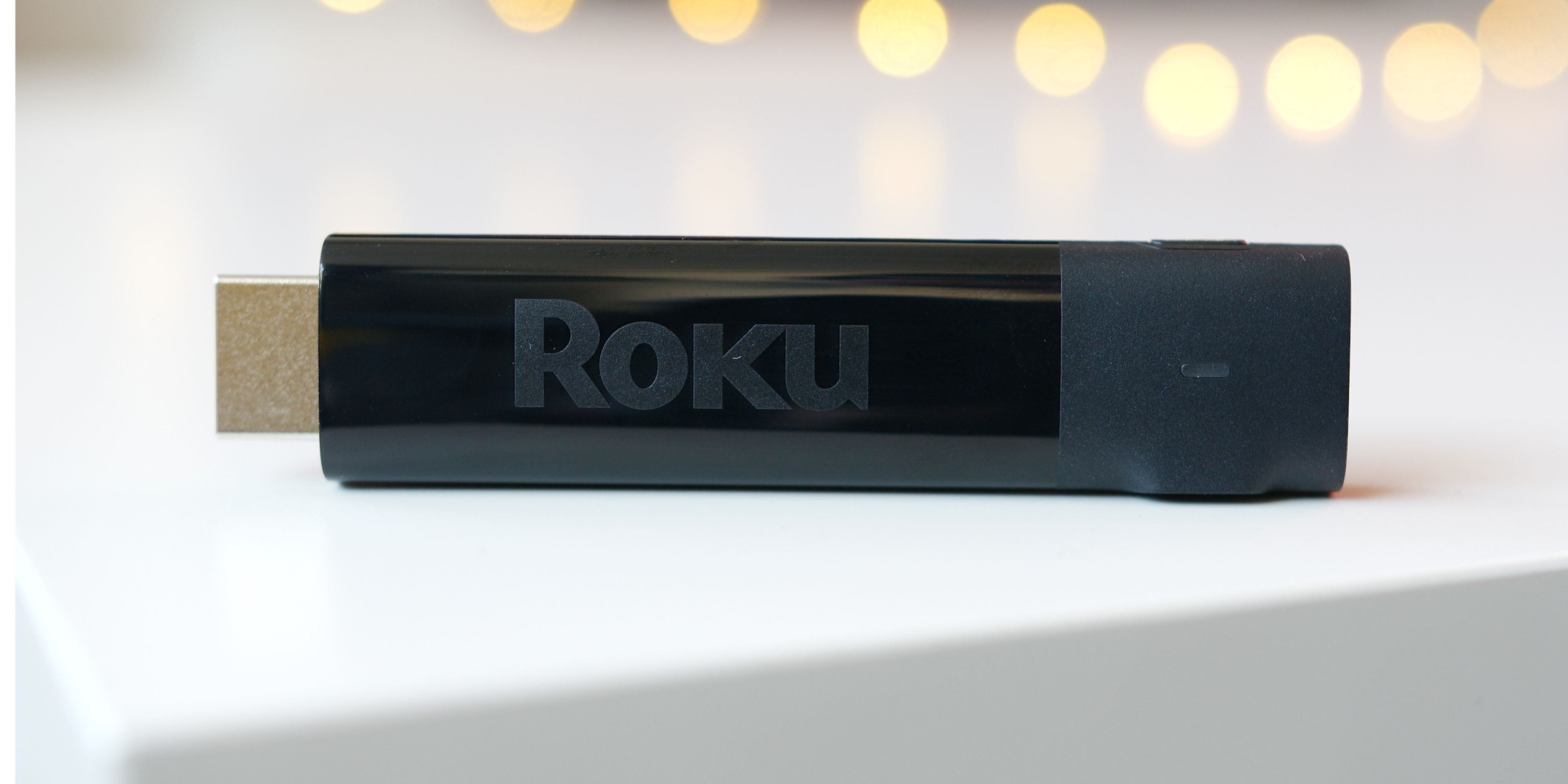 The Nvidia Shield TV is a little different as it’s more of a set-top box that needs a position under or near your TV. It does mean a mess more cables and a much more noticeable piece of hardware than the Roku.

Both options come with a remote but you can get the Nvidia Shield TV with a gamepad — for gaming purposes. If I had to pick a favorite; I would personally say that I like the Shield remote better but I think the Roku remote is easier to use and gives you more controls at your fingertips. 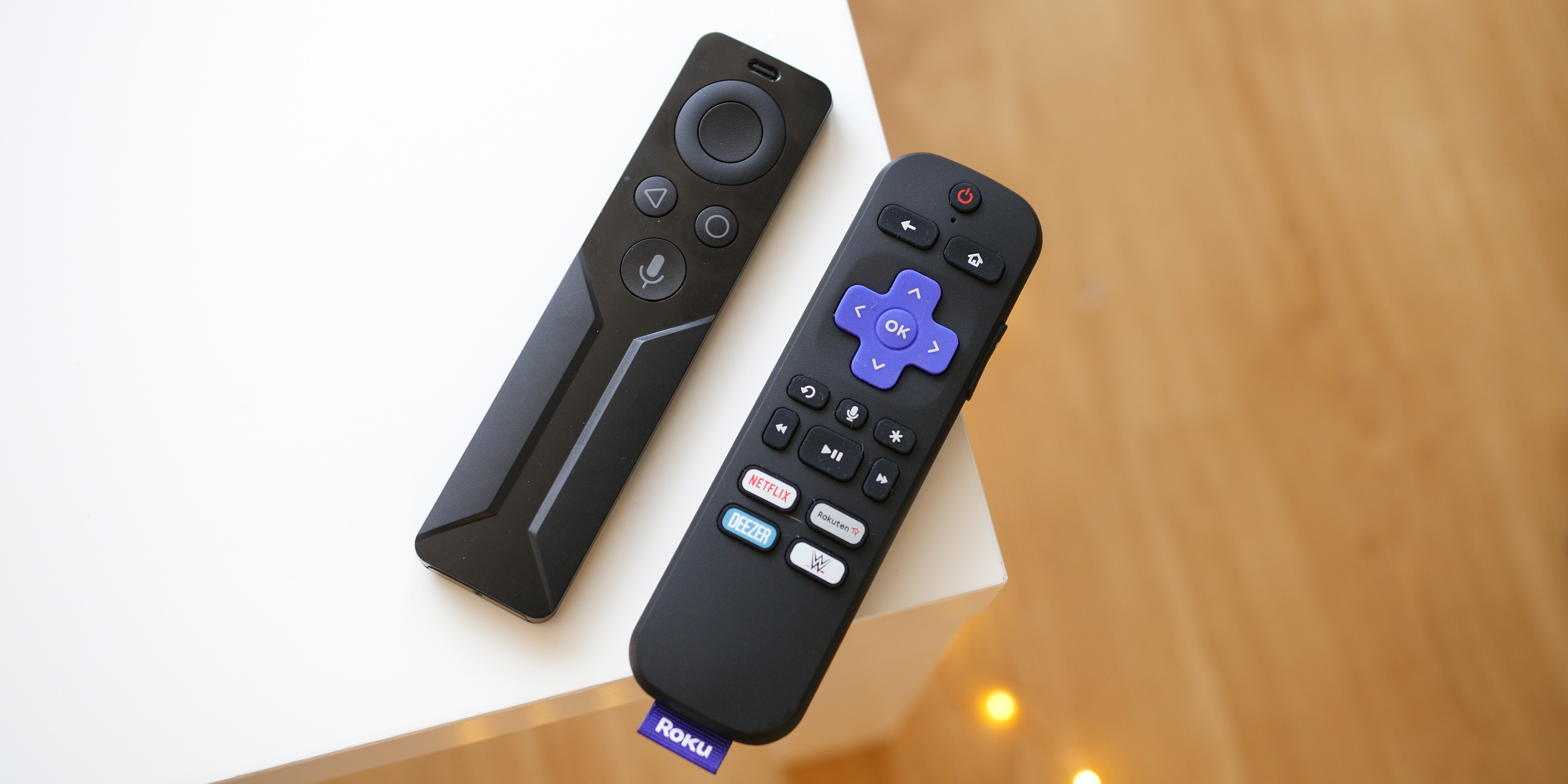 If aesthetics on your remote are important, then the sleek, metal Shield TV remote is arguably better. If durability and ease of use are essential — especially for those with children — then the plastic and rubber buttoned Roku remote will likely be preferred.

Factor in a few of the other features, like the ability to adjust your TV volume and turn off your set too. On my UK remote it has four pre-assigned buttons for Netflix, Rakuten, Deezer and the WWE Network.

It’s important to note that the Roku Streaming Stick+ — and by extension, every piece of Roku hardware — lacks the ability to utilise the Google Assistant to control any part of the system.

This is at the core of why anyone heavily invested in the Google ecosystem or owners of Google Home and Smart Display devices will likely side with an Android TV streaming solution or a simple Chromecast addition.

Because there is no input from Google in the Roku ecosystem — apart from apps — you get quite a different menu and control system. I would say that it is easy to navigate and control, it just feels a little bit ‘classic’ or dated. 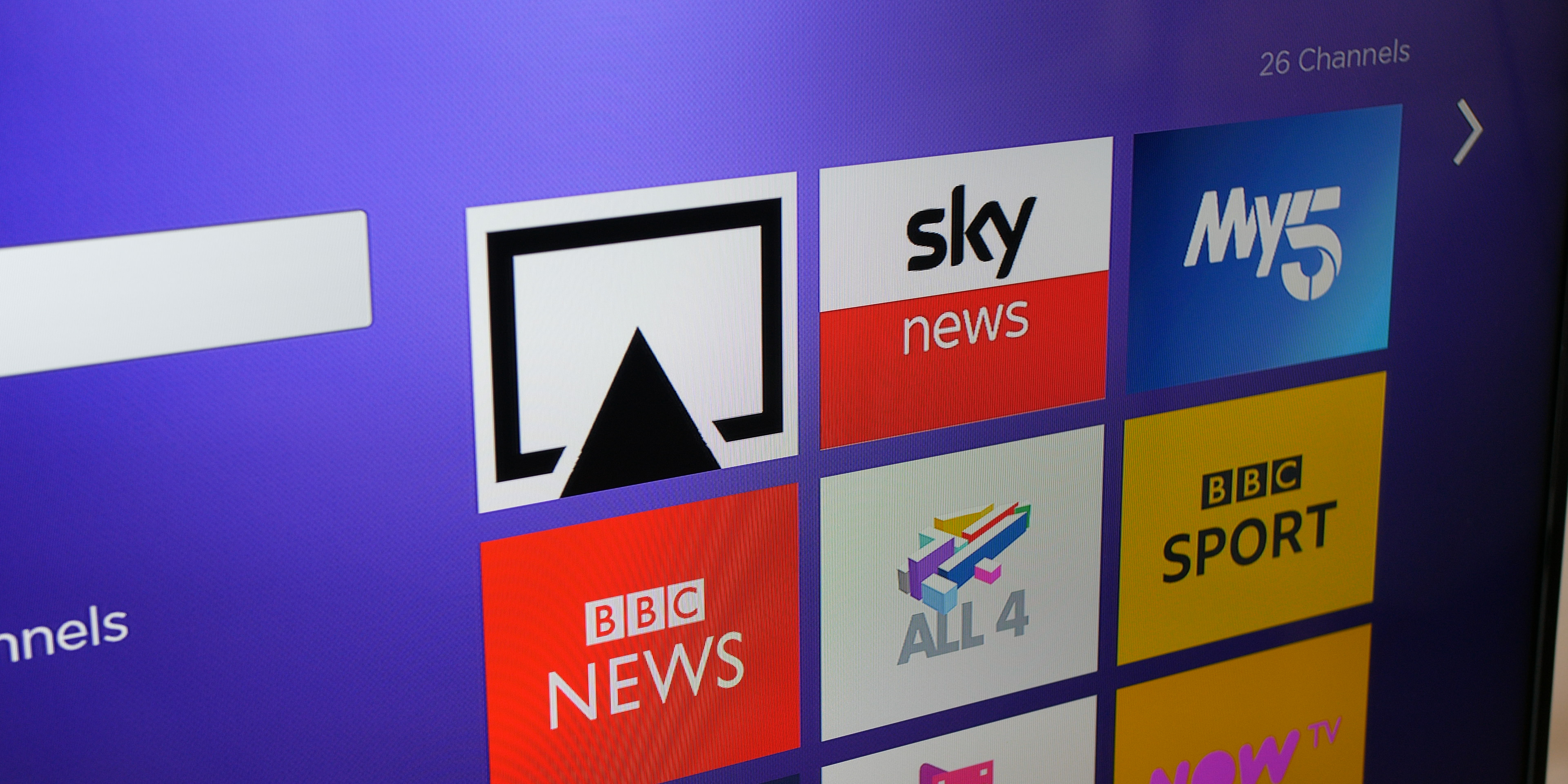 That doesn’t mean that the Android TV-powered Nvidia Shield is any better, far from it. I would just say that it is a million times slicker in day-to-day usage. I would always lean towards Android TV because of the added controls and I feel more comfortable (and happier) when using them.

I’m sure that there are people reading this who think that of course, I would be biased towards Android, I write (and make videos) for 9to5Google not 9to5Roku.

You’d kind of be right, although I would most definitely say that the Roku interface is way easier to grasp from the first time you power it on. That said, it almost feels to the detriment of the overall experience.

Both the Nvidia Shield TV and the Roku Streaming Stick+ offer a couple of things over the Apple TV 4K and Amazon Fire TV that makes them way more enticing to cordcutters in my opinion.

Firstly, the Apple TV 4K costs way too much for very little. Secondly, the Amazon Fire Stick pushes you down one road and bumps Google out of the equation at every opportunity — even if there are a few workarounds to get YouTube working.

4K HDR support is included with the Roku and Nvidia Shield, which of course is a big selling point to many with 4K HDR capable TVs. It also makes sense from a futureproofing standpoint to opt for a 4K streaming option, even more so if you want to enjoy 4K HDR YouTube, Netflix and more online content.

I don’t want to dwell to much on the voice control aspect, mainly as it simply isn’t fair on the Roku. The voice control is basically none existent and it is flakey at best.

When you compare to the proper Google Assistant integration with the Nvidia Shield and it blasts the Roku right out of the water, leaving no survivors. If being able to control your entire home entertainment system with your voice is essential, then the Nvidia Shield TV is exceptional. 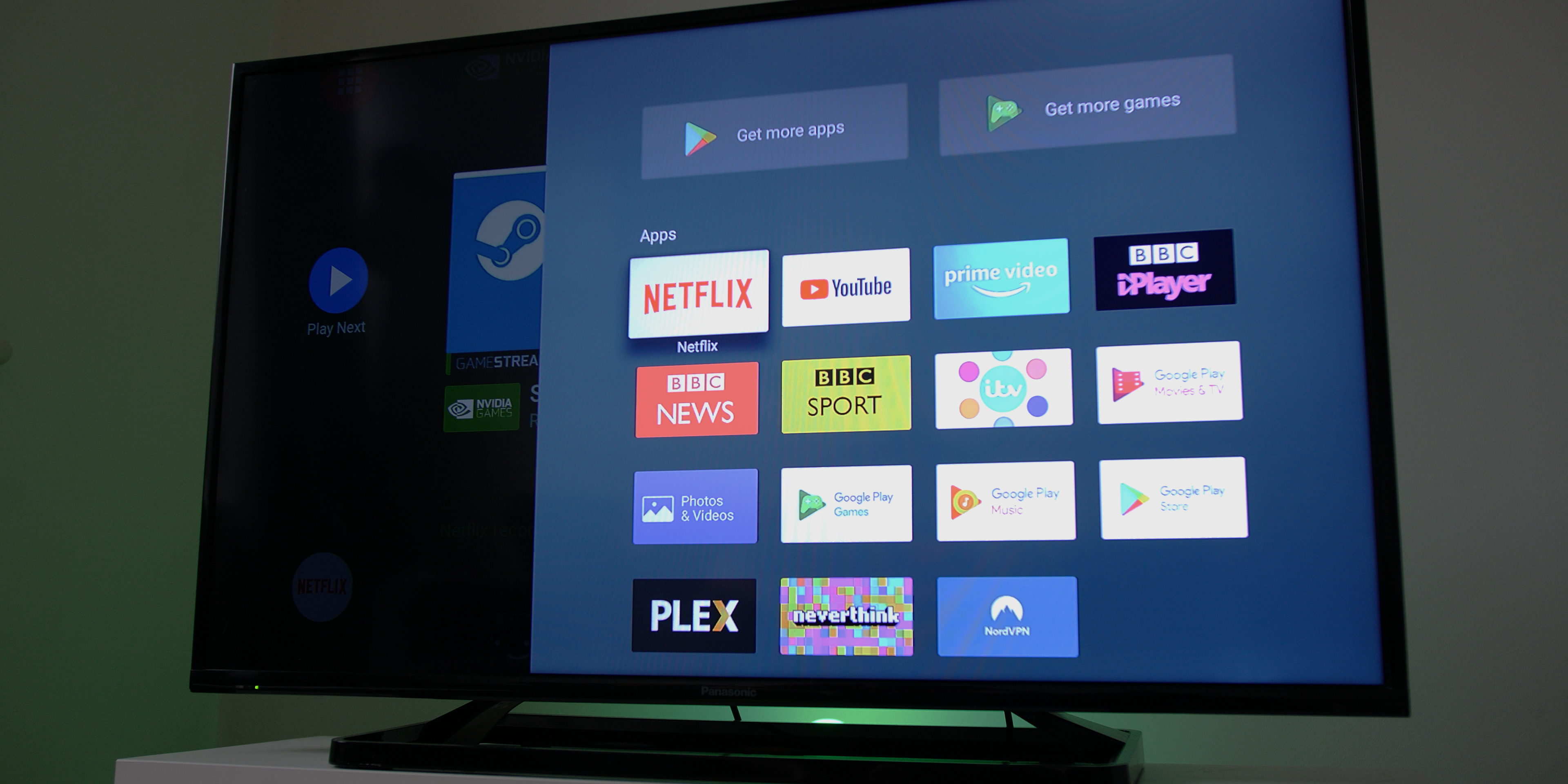 The power of Android TV and the apps available does mean you have a few more options to download. With a pretty sizeable game library that is constantly growing, if gaming is something you are passionate about then it stands to reason that you travel down the Android TV path.

Alternatively, the Roku channel store is littered with channels or apps that you can add. I have to say that most feel like poor imitations or workarounds of many that are now available on Android TV. There is no doubt that the experience with apps built for Android TV is much more polished and enjoyable.

There is even the major annoyance of apps that sometimes just can’t be removed or deleted from your Roku account. I have an old AirPlay activating app called ‘trimeplay’ that I simply cannot remove. It is persistent. It is indicative of the user experience that makes me want to sometimes smash the Roku to pieces.

I will say that the Roku does handle Plex well but doesn’t have native support for Kodi. You can get around this for a workaround using screen mirroring but that is a really frustrating experience — something I’m finding the Roku is becoming known for.

The Nvidia Shield TV and the Roku Streaming Stick+ both have access to both Netflix and Amazon Prime Video, which I think is one of the core reasons that either option might — or should — be towards the top of any shopping list.

The severe lack of real native support for Amazon Prime Video on Android TV boxes is a major frustration, as is the lack of official support for YouTube on Amazon Fire Stick devices.

Both the Roku and Nvidia Shield TV — even at such differing price points — are such similar devices thanks to the core application feature-set and general usability.

Gaming plays a big part in my life, as does the Google ecosystem. For that reason, I would always suggest the Nvidia Shield TV if you are happy to spend over $100 on a cord-cutting streaming solution.

Being able to download and play even Android TV games alongside streaming full PC titles using the Nvidia Shield TV is one of the core reasons that it has remained under my TV since I got the device. Gaming on the Roku Streaming Stick+ is limited and shouldn’t be listed as a selling point of the Roku system.

Then there is the overall experience to consider. I personally really care about how smooth a device is in operation, especially if I use it on a daily basis. The Roku Streaming Stick+ is sub-par for that reason.

The menus are dated, beyond the big network-managed channels and Plex it really isn’t a very nice overall experience in 2019. It simply hasn’t changed since around 2013, which is just not good enough in my opinion.

Although I’m venting about the interface, the fact that you get 4K HDR support and all the main streaming services included makes the Roku Streaming Stick+ a really good product. It’s up to you to decide if the issues are enough for you to deal with.

If you are looking to give your family members a simple streaming option and introduce them to the world of streaming then it might be wiser to suggest a Google Chromecast.

Controlling via a smartphone is much easier and the library of compatible devices and applications far exceeds that of both the Roku and Nvidia Shield TV — although the Shield does have Chromecast capabilities built-in.

Get the Nvidia Shield TV

Get the Roku Streaming Stick+

Get the Google Chromecast