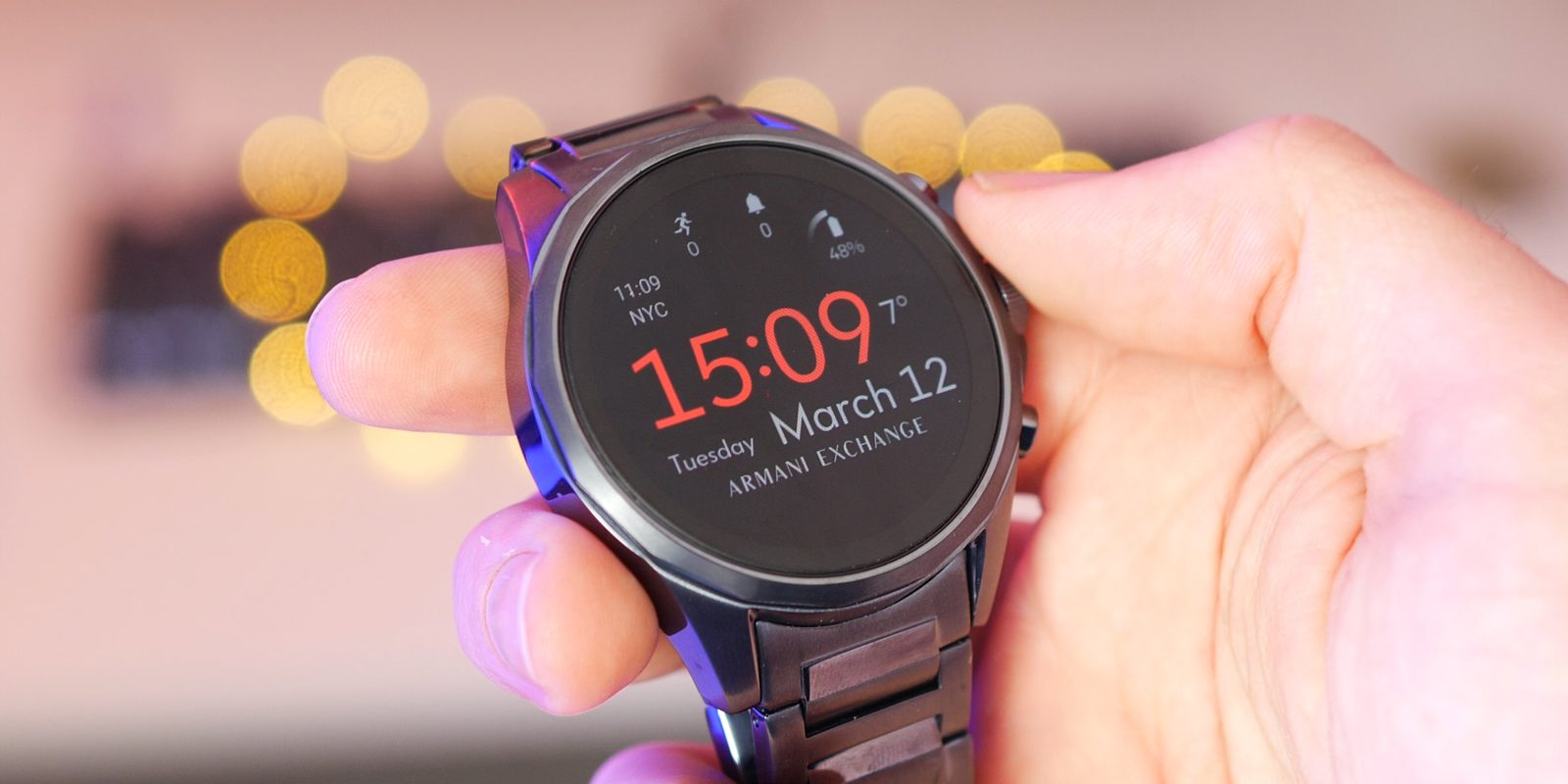 Whether you are interested in watches or not, it’s hard to argue that Italian brand Emporio Armani makes some of the most stylish options for those with a middling to high-end budget.

You could say the same about any and all metallic link bearing watches — smart and dumb. You just have to consider if this is an everyday option or one for special occasions.

Those reasons alone put the Armani smartwatch into a weird category along with the Michael Kors Access Runway — the fashion-focused smartwatch.

Like any Fossil made smart wearable, the Armani Exchange Connected is very well put together. The watch has a solid feel, but a lightweight strap. My review model came in an unusual sort of silver-blue color that, if I’m honest, I wouldn’t choose given the option.

You can get this smartwatch in gold, silver, black, and that blue color all of which have a pretty sizeable 48mm case. That’s one of the reasons this smartwatch stands out in a landscape of smaller 42mm casings. It does pose a comfort issue for those with smaller wrists.

I said that the Michael Kors Access Runway was very ‘fashion-focused’ and the Armani Exchange Connected watch most definitely adheres to that too. I also find metal link bracelets aren’t the most comfortable. I caught the hairs on my wrist almost instantly, meaning this watch was not off to the best of starts. 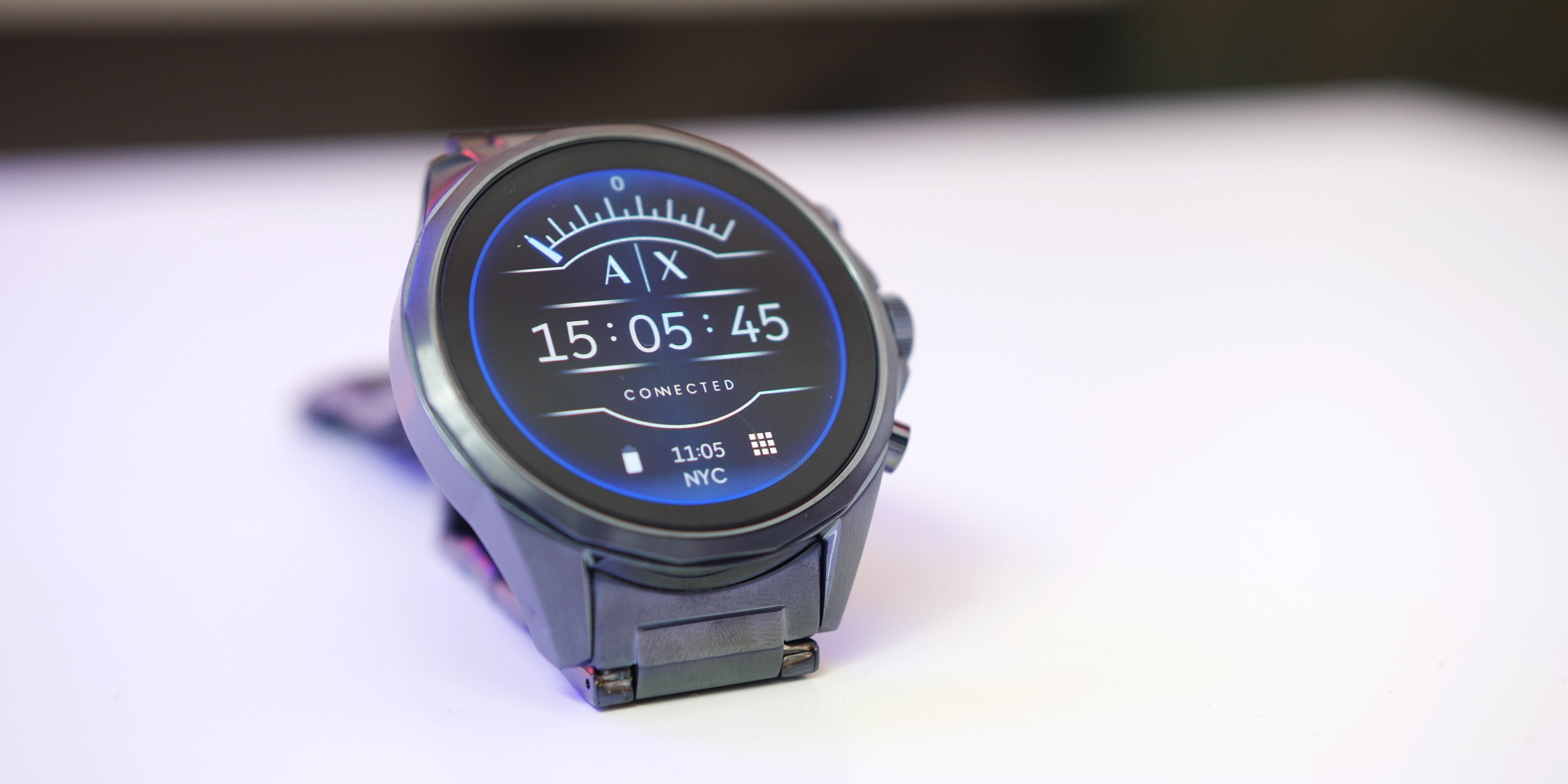 The hardware buttons and the rotating dial are as good as I’ve used on any smartwatch thus far. And they have a satisfying spongey feeling when pressed or activated.

Internally, the choice to opt for Snapdragon Wear 2100 chipset might raise some eyebrows, especially given the pricing. It’s a bit disappointing that we don’t see the Snapdragon Wear 3100 chipset here. But for those expecting that chipset to be the quantum leap for Wear OS watches, it, unfortunately, isn’t.

That isn’t by any means apologizing for the lack of up-to-date hardware, but it’s simply an explanation for why it isn’t included. You will find 512MB of RAM and 4GB of internal storage on this smartwatch though. Just to note: There are no speakers on this smartwatch, but there is a microphone for audio commands with the Google Assistant. 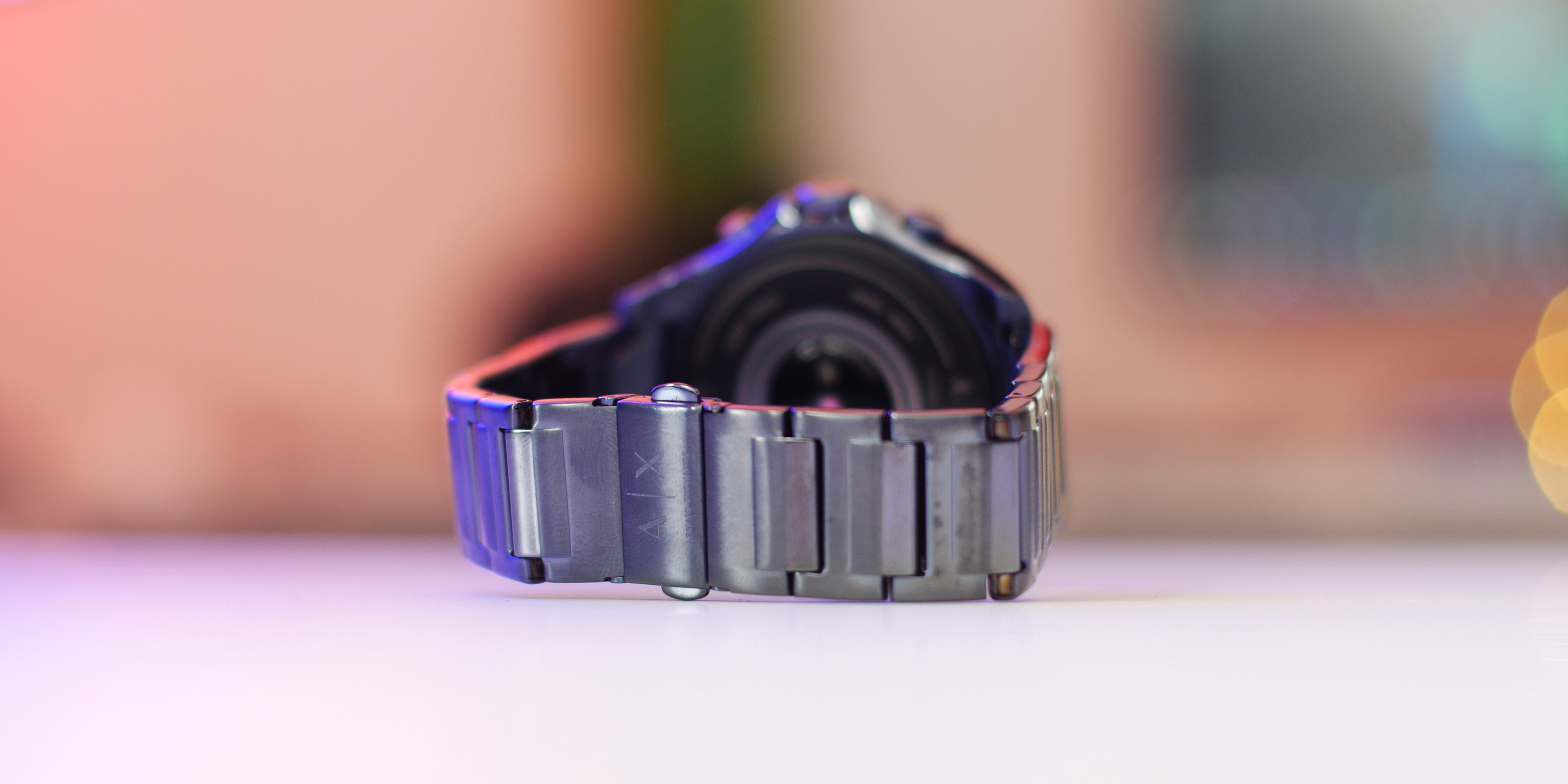 Everywhere else this is a typical Armani watch but with smartwatch capabilities included. If you’ve ever owned an Armani piece of jewellery then you will have some idea of what to expect.

I do really like the display. It’s crystal clear and responds to touches well. The bezel might not be top of many style guides but it does ensure that phantom edge touches are not an issue. It does mean that the display sort of floats rather than touches all edges. Whether that is a problem is completely up to you I would suppose.

Every time I test a new Wear OS smartwatch I enjoy the familiarity of the operating system, but still come away feeling underwhelmed by the experience. On this Armani watch, Wear OS feels much like it does on those from Michael Kors.

The only pre-installed app that differentiates it from other Fossil-made smartwatches is the ‘Saved Looks’ app. This is essentially the same as the MK Access app. It allows you to tailor your watch face for specific purposes. 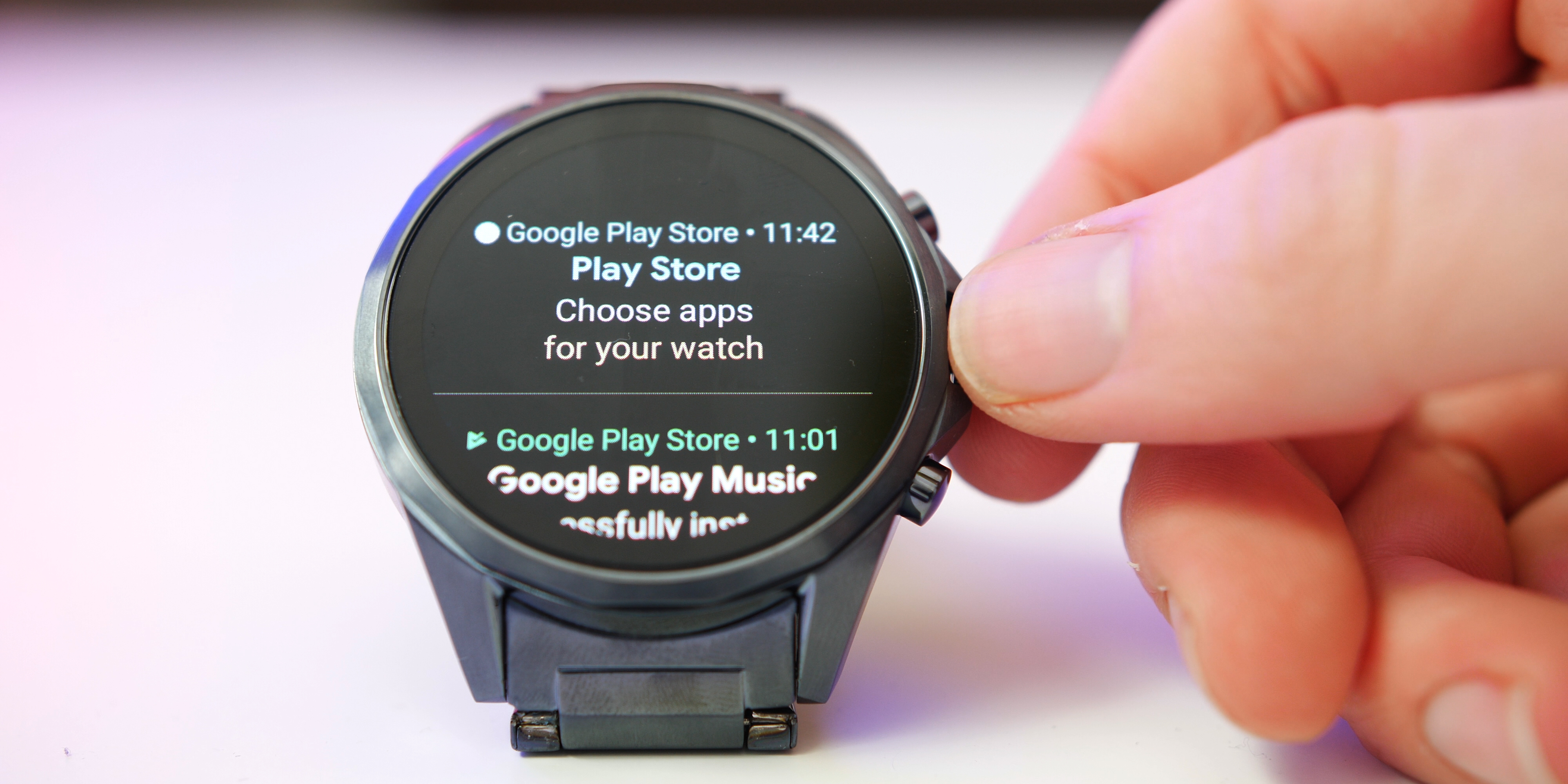 Wear OS 2.6 is included on this smartwatch, it runs pretty smoothly, but that doesn’t mean it’s perfect. At times there is some noticeable slowdown — most commonly when the watch has been sat for a few hours without any sort of interaction or right after powering on.

These slowdowns don’t affect the overall experience all too much in reality. I also personally can’t pinpoint if the updated Wear 3100 chipset would have eliminated them. Unfortunately, it’s just something we have to deal with at this moment in time with Wear OS and Android-based smart wearables.

My experience of the battery is that it manages an average day of usage. Now, let’s discuss what an average day entails with this more regal smartwatch. 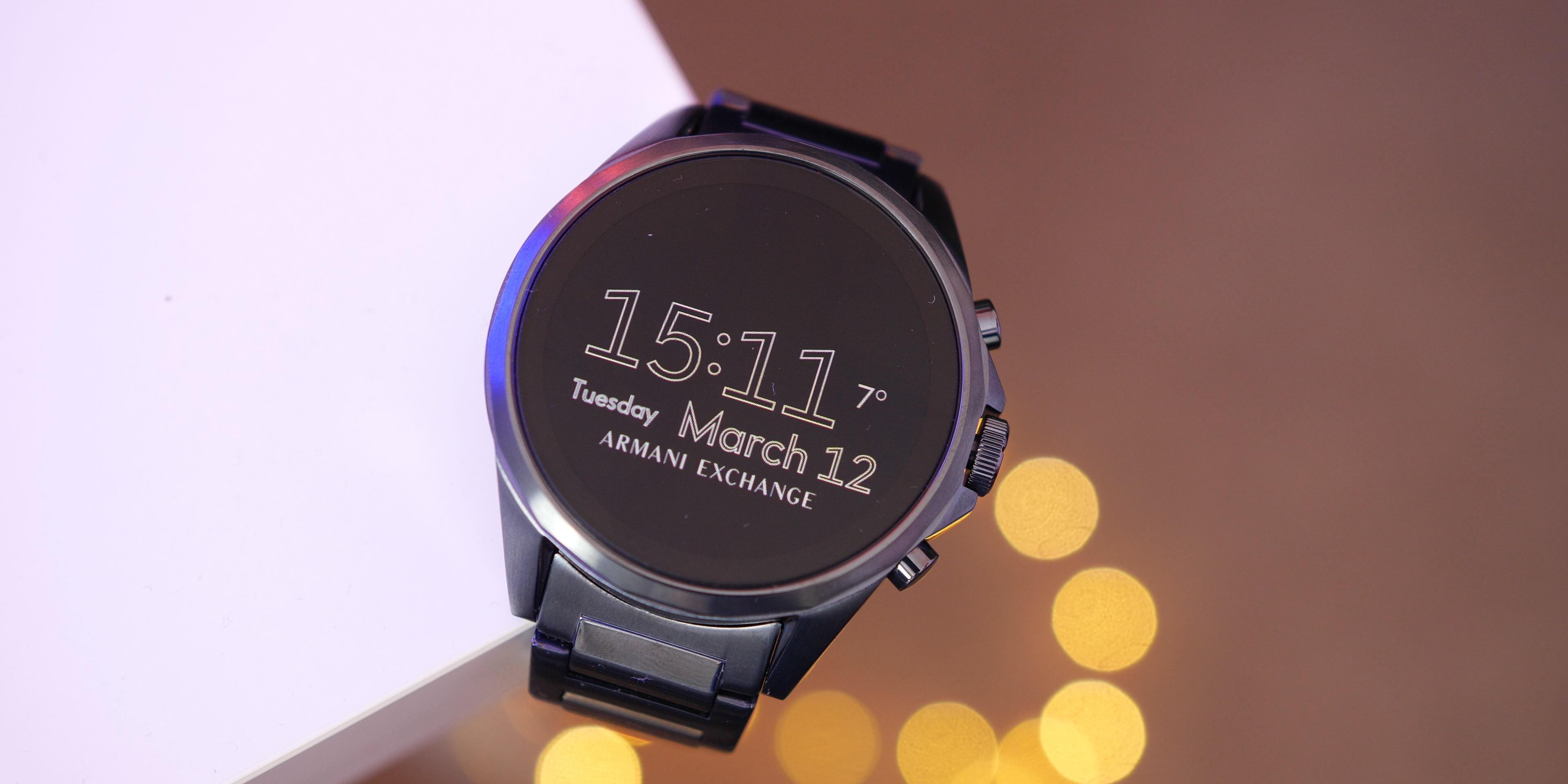 Firstly, I mentioned that the design does not lend itself to the avid gym goer simply due to the size. That said, as a result of not using the watch in the gym or during exercise, I found it managed to just about handle a full day without needing a top-up.

I’d be a little more concerned if you are a smartwatch power user, but for anyone like myself who won’t wear this watch in the gym, it should have great day-to-day battery life.

My first impressions when I opened the box of the Armani Exchange Connected was a genuine wow. Firstly, because it has a crown and watch face that is much bigger than anything I’ve ever worn before. Then because it is deceptively lighter than I was anticipating.

The biggest problem is how niche the high-end smartwatch really is. If you are in a professional job setting it’s bound to be perfect. The Armani Exchange Connected simply isn’t great for the gym or for wearing during exercise.

The pricing isn’t too bad at just a smidgen under $300 considering the design and the sleek look. If you want the perfect accompaniment to a smart suit or a sharp outfit then the Armani Exchange Connected might be the perfect option — potential battery banana skins aside.

At present, this Fossil-made smartwatch is only available from select retailers including Amazon and Watch Station. It also shouldn’t be confused with the slightly different Armani Exchange Connected (2018) model.