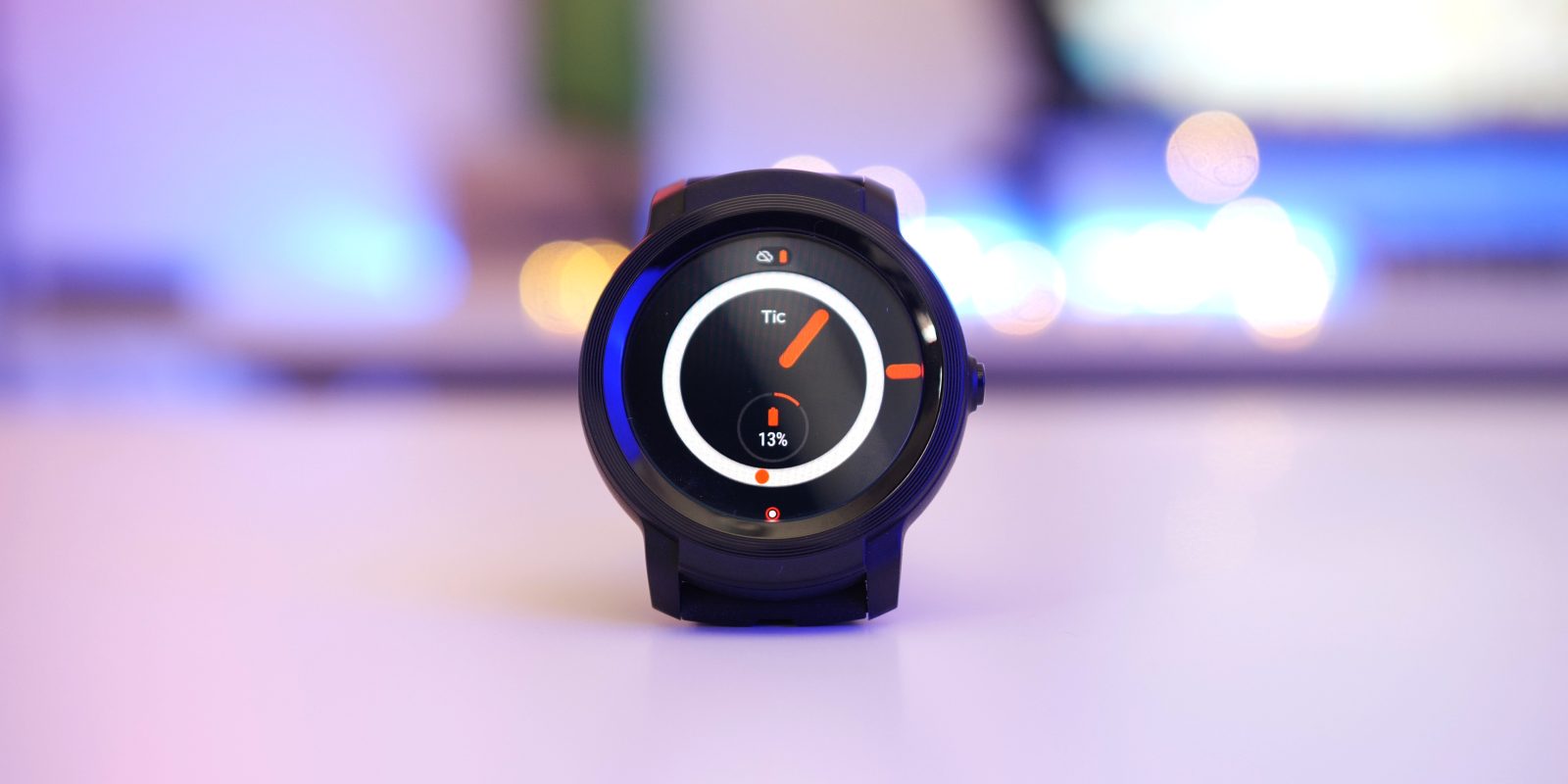 The Ticwatch E2 is the sequel to one of my favorite (and first proper) Wear OS watches — the Ticwatch E. Unlike its predecessor though, the Ticwatch E2 improves upon a vast swathe of issues that plagued the original to make it a great purchase for anyone wanting a cheap, yet decent quality Wear OS option.

Let’s not get confused here, although the Ticwatch E2 is very much a budget smartwatch, that doesn’t mean it feels cheap or poorly made. Like any Mobvoi smartwatch, the hardware is relatively good for the price and more than met my expectations in day-to-day wear.

Firstly, I love the design and aesthetic of the original Ticwatch E. I am a huge fan of a simple, sleek look and I loved the combination of sleek black and matte plastic (and silicone) on the original model. The crown too was just the perfect size for my own personal taste. 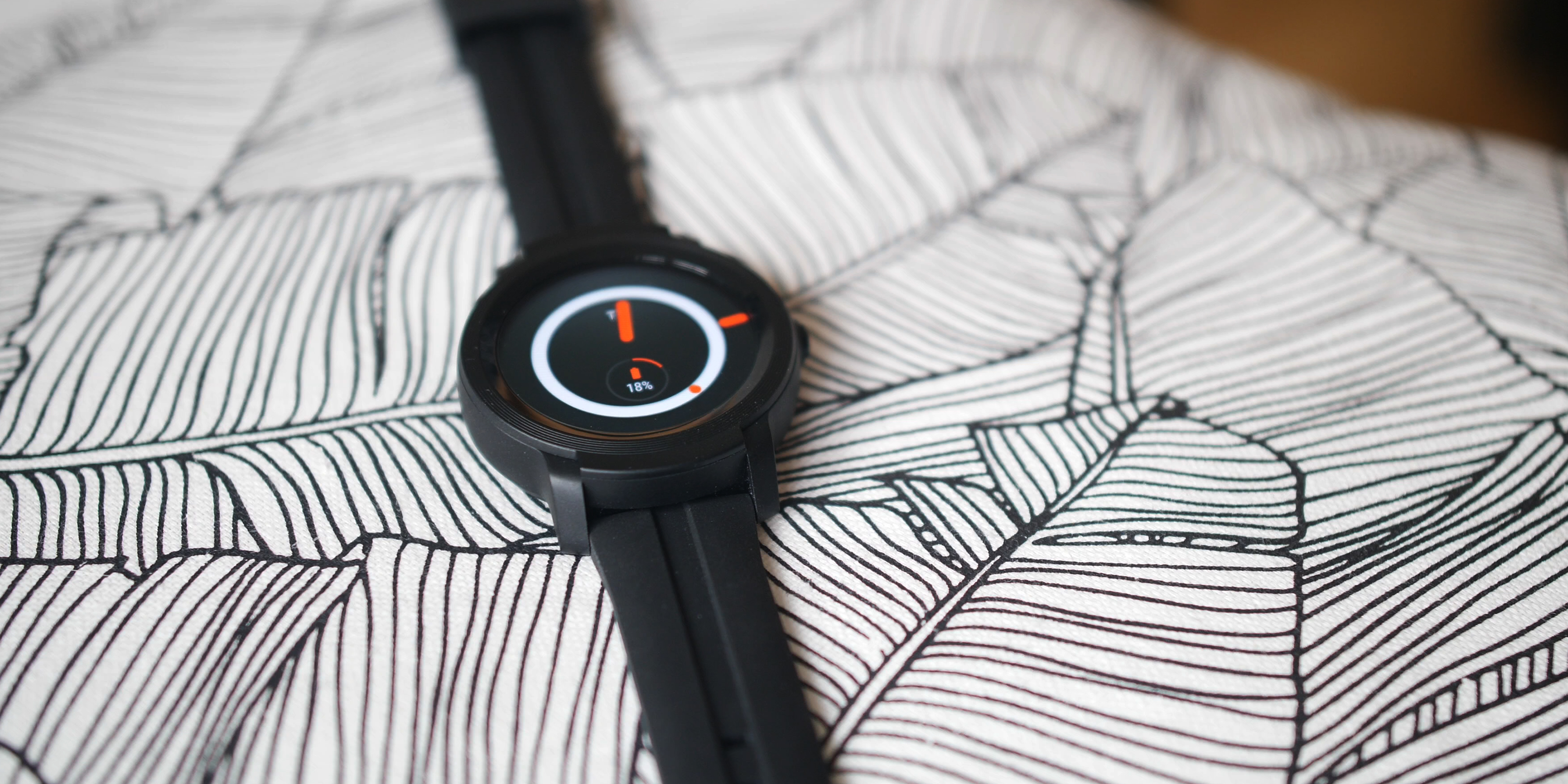 With that enthusing out of the way, I can’t say I’m a huge fan of the extra size but only because I have quite slim wrists. That is the only real criticism I can level at the new design. Well, maybe I don’t really care too much for the extra go-faster stripe on the strap but that isn’t a deal breaker by any means.

I must say that the E2 was comfortable when I wore it all day, but I would say I did ‘know’ that I was wearing it — if that makes sense. The extra size doesn’t add any real extra heft, but it is noticeable on your wrist.

The slightly larger crown plays host to the 1.39-inch OLED display which looks great even in direct sunlight. Going from E to E2 you can clearly see a difference in brightness and overall clarity. Obviously, if you get up very close you can see some pixelation on such a small display, but at arm’s length, it’s a crisp, clear and colorful watch display.

To be honest, the new menu button position doesn’t bother me at all. I get that it fits in more with the future designs of Mobvoi smartwatches, so it is a sensible move to swap sides. I do like that it retains that solitary button rather than the dual system on the C2, as I never use the other button in day-to-day life.

You can still remove the watch strap if you want a different look or prefer a different style of band. I think I may swap out the original Ticwatch E band as I do prefer the plain look of the strap. The clasp does feel really nice and secure though when fitted to your wrist.

There is now a GPS built into the watch which wasn’t present in the older model. It’s about time really and it does make this much easier to recommend for those that want a watch for running and general workouts. Add to that the swim-proofing up to 5 ATM and I’m beginning to think that the Ticwatch E2 could be one of the best budget workout tech accessories.

One thing I think might disappoint some users is the lack of a speaker. That means no taking calls from your wrist. It’s definitely something to consider if you want to be able to talk to your wrist rather than pick up your handset. Furthermore, it also means no playing music — not that I would ever recommend doing that with a smartwatch.

There is a microphone though, meaning that you can ask the Google Assistant queries, but you’re not given any audio feedback, it’s all on the display or it allows you to open queries on your phone should you want to do so.

I found that the audio was picked up with no real issue so long as I spoke at a normal tone. That said, I didn’t enable the “Okay, Google” activation as I have that activated on my Pixel instead. 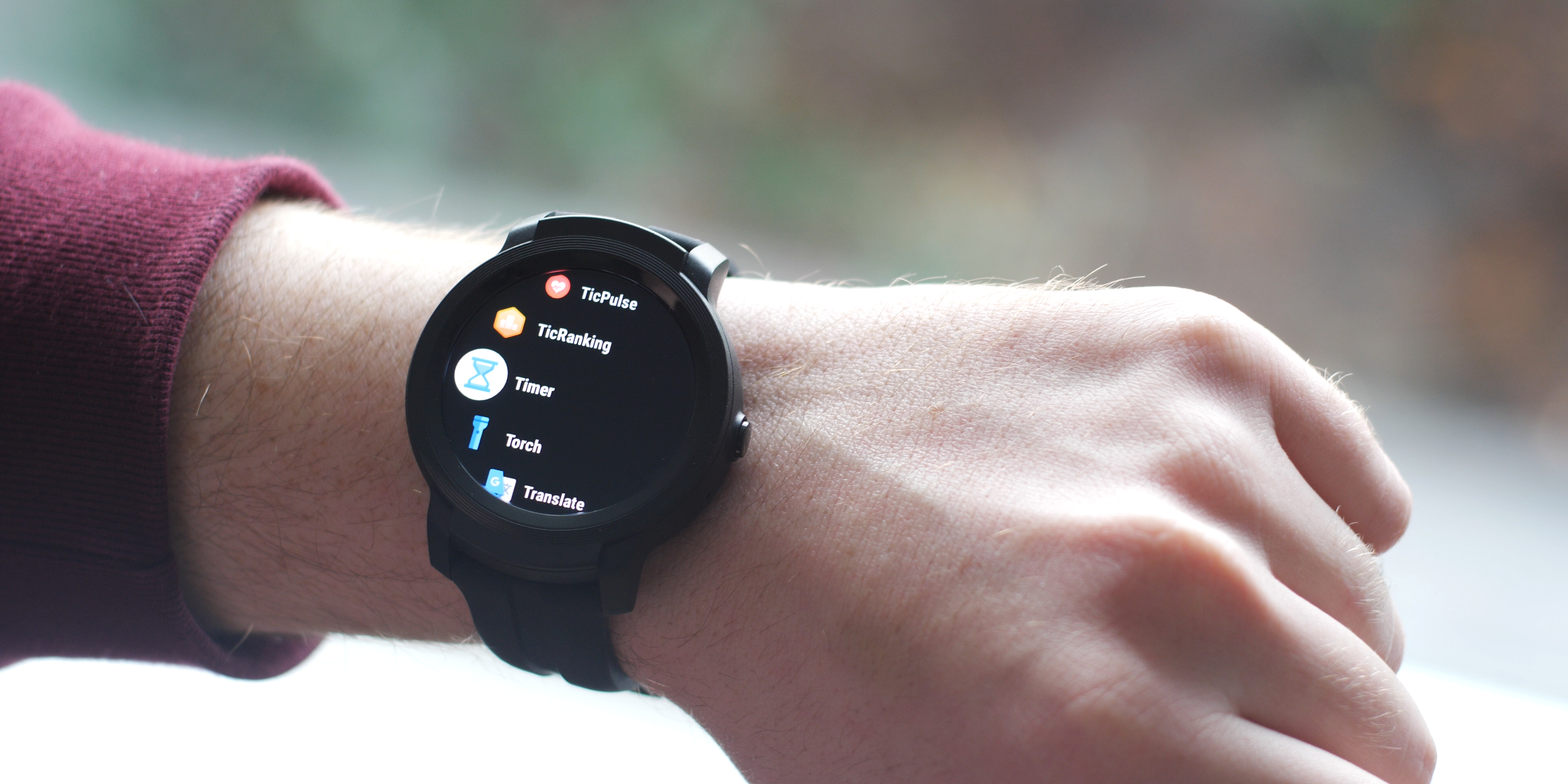 Wear OS is simply okay. It has improved a ton over the past 12 months or so but it just lacks something that really differentiates it or makes it a must-have addition to your Android experience. The hardware is really the only main differentiator for the most part.

Yes, there are small software tweaks here and there alongside a few third-party apps, but nothing really all too special. The Ticwatch E2 feels very much like all previous Mobvoi smartwatches. That isn’t a bad thing, it’s more a criticism of where Wear OS is right now. Then again, there isn’t a great deal you can do with a smartwatch OS, so what can we really expect with each hardware release.

Performance is good, I have only noticed a slowdown on two specific occasions. Once during the initial set up of the watch, which is to be expected and something I have experienced with every single Wear OS thus far. Installing applications and general set up processes will bog the watch down a little bit, although it soon passes.

The only other time I do regularly notice slowdown is when powering on the device. It takes a minute or so for the Ticwatch E2 to ‘warm up’ and then it’s plain sailing from that point.

You might be disappointed to hear that the Ticwatch E2 and the S2 both come with the Snapdragon 2100 chipset rather than the newer 3100. That said, having had no experience of the newer chipset, I can’t comment on if there is a performance difference.  Although, I am aware of reports that this does perform better and has a longer-lasting battery than that of the Fossil Sport.

To be 100% certain, I consulted with my colleague Ben Schoon who has both the Fossil Sport and the Ticwatch E2 and S2 to compare and contrast with. His verdict was that the E2 and S2 weren’t noticeably slower. That said, it is still disappointing that Mobvoi hasn’t opted for the newer chipset in these smartwatches.

Take that with a grain of salt, but I would say that clearly, Mobvoi knows how to optimize the Snapdragon 2100 better than some brands who have stuck the Snapdragon 3100 inside and hoped it will solve poor optimization. 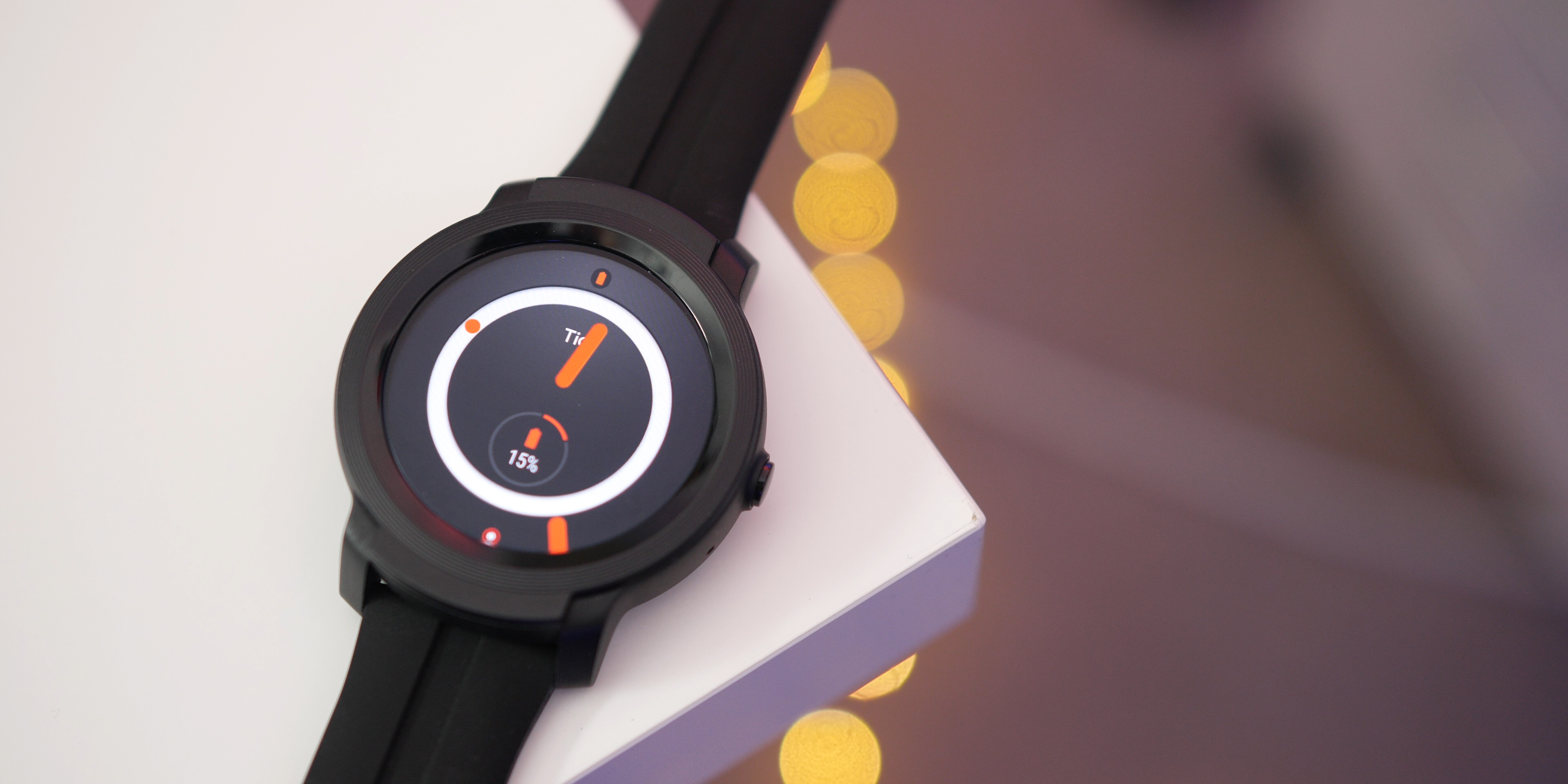 One area that I found was lacking with my original Ticwatch E was the battery life. It started off so well, but quickly deteriorated after a few months unless I was clever with how I used Bluetooth and connected to Wi-Fi. Constant email pings and message notifications took their toll on the watch — not exactly great for a smartwatch with the sole purpose of acting as a notification bridge.

The battery life on the E2 has been really good thus far. I’ve managed a full weekend on one charge, which included an hour of playing soccer too (granted my heatmap would have been pretty embarrassing!). I only worried about topping up around 8pm on the second day (Sunday).

If you live a pretty active lifestyle and want to track every single inch of your movement throughout the day, I would suggest topping up or carrying the charge cable regardless of how good the battery is. That said, the E2 manages a day of heavy use quite comfortably.

It’s a shame that detailed battery statistics are not available on Wear OS as yet, but I would be surprised if my screen-on time ticked over an hour across two days FWIW. I simply don’t sit and use the display for extended periods. I couldn’t think of anything worse than trying to reply to a text message via the tiny touchscreen. Although to be completely honest, it does work much better than I give it credit.

Improving the charger was one thing I am pleased that Mobvoi has done over the original. It still isn’t perfect, but at least it doesn’t disconnect as easily and snaps onto the back of the watch with no issues. Another bonus is that this new charger is compatible with the Ticwatch S2 too.

Mobvoi is one of the very few brands that seem to take Wear OS seriously and it shows. They are making a lot of decent smartwatch hardware for anyone who wants to stick to Android rather than go elsewhere. I can’t say I prefer the design over the original Ticwatch E, but it is a great sportswear option that I found comfortable even while playing soccer.

I like the design of the E2, but I can’t honestly say that I love it because I do prefer the original design quite a bit more. My favorite Wear OS smartwatch still remains the Ticwatch C2 for a similar reason. Even with that said, this is quite a bit improvement over the original in a number of ways.

The battery life issue is now gone, and judging by how the C2 has held up so far, it won’t be an issue until the number of battery charge cycles reaches high triple digits. It’s a snappy performer that although the addition of the Snapdragon 3100 would have been welcome, doesn’t seem to hinder the experience at all.

When you consider the design vs. the rest of the Ticwatch lineup, it does become a harder smartwatch to recommend. The removal of the speaker from the original versions will no doubt prove a sore point for some people out there too. In terms of the looks and design, I know that a few of our team already agree that the Ticwatch C2 is just a much nicer smartwatch for everyday wear. That said, the E2 and S2 are still, in reality, superior options for anyone wanting a durable, hard-wearing sports-focused Wear OS smartwatch.

For anyone wanting an extension of their activewear, then the Ticwatch E2 should be the new go-to cheap Wear OS options thanks to the durable build that — believe me — can really take a beating without you worrying. Well, that’s at least until we eventually see Mobvoi plonking the Snapdragon 3100 chipset into upcoming smartwatches.

Get the Ticwatch E2

Get the Ticwatch S2

Get the Ticwatch C2