Last week, we spotted references to “system updates” occurring via the Google Play Store. This feature — which specifically delivers a “Google System Update” — appears to be live as part of Android Q.

One Pixel 3 user running the Android Q Beta on Reddit today encountered a “Google System Update” notification that was described as being “similar to one you get for an app update” rather than a full OS OTA. It proceeded to download a file and automatically restart the device.

During the boot process, the ‘G’ logo appeared against a white background with a loading indicator below it. This process did not deliver a full OS update as the build number remained unchanged.

Unfortunately, this user was not able to capture any other screenshots of the process, including whether there’s an in-app UI beyond that notification. After the restart completed, the user was not able to find any trace of what changed. This could be indicative of Google still testing out the process on a small scale, but hopefully the Play Store gains a screen that discloses what exactly was downloaded and updated in the background. 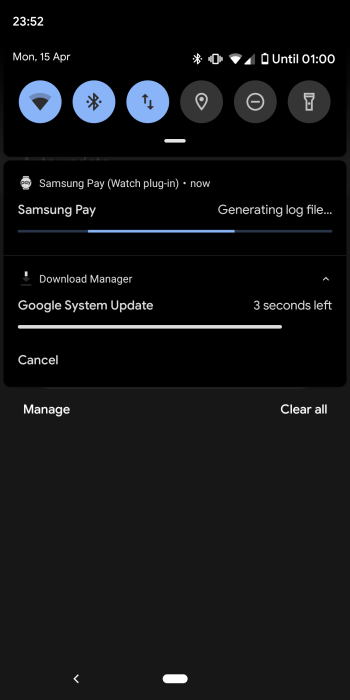 Our APK Insight last week spotted such an interface that sounds quite similar to the old “System update available” screen.

Google has yet to detail any other type of “System Update” beyond the monthly OTAs patches and new versions that users are already familiar with. Any announcement would likely come at I/O 2019 when the company has a developer audience that could benefit from more frequent backend updates and features.