Earlier this month, the Google app beta revealed work on a sleep timer for Google Podcasts. We successfully enabled it last week, and it’s now beginning to roll out to end users, along with search topic suggestions.

The audio player in Google Podcasts features a new timer icon at the bottom-center of the screen. Tapping loads a scale that users can drag in five-minute increments until the end of that particular episode. There’s a quick “End of episode” shortcut, with a “Start” button to the right.

Once set, the main player will feature a countdown with users able to jump back into that UI to add or subtract five minutes, or stop entirely. The sleep timer will not pause if users happen to manually stop the show, and continues if you jump to another. It’s a small feature, but a welcome addition for Google Podcasts.

Meanwhile, another feature that recently rolled out is a carousel of search suggestions. Upon expanding the audio player, pills with terms that Google pulled from the episode you’re listening to are shown at the top of the control screen. Tapping any will open a Chrome Custom Tab to Google Search on the web.

These suggestions also appear when viewing show notes. Unfortunately, the new “Explore topics in this episode” carousel automatically truncates the episode description, links, and other information. Another recent addition was the ability to filter a podcast listing by newest/oldest episodes, while there’s a somewhat hacky method to access Google Podcasts on the web.

An up-to-date version of the Google app is required to access both of these new features, but it shouldn’t be tied to a particular release. We’ve encountered both the sleep timer and search suggestions on Google app 9.66 and later. 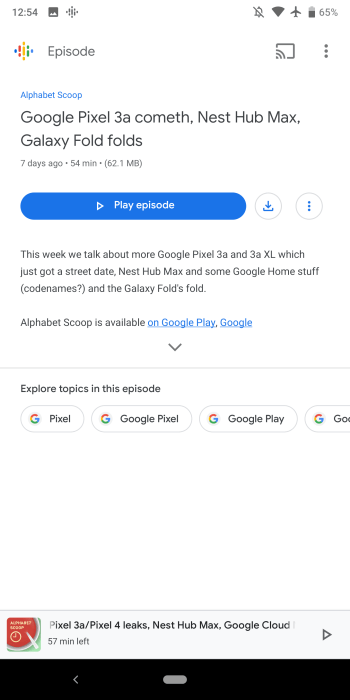