Since late last year, we’ve been following the development of Microsoft’s attempt to start fresh and do things better with their Edge browser by rebuilding it based on Google’s Chromium (the foundation of Google Chrome). One of the exciting prospects to come out of that development is that Edge would be available on non-Windows platforms. As of today, the new, Chromium-based Microsoft Edge is ready to try out on macOS.

When we first discovered that Microsoft was contributing to Google’s Chromium project, no one could have dreamed that it would culminate in Edge becoming a cross-platform application. At the same time, though, the company has put a great deal of effort, over the past few years, to make their products great for everyone, not just Windows users.

We’ve known since its first official announcement, that Microsoft had intended to make the new Edge available on macOS, though no specific timeline was shared. Microsoft has announced today, via The Verge, that the first builds of Edge for macOS are ready for testing. For now, only the less stable nightly Canary builds are available, with the somewhat more stable, weekly Dev builds coming soon.

One of the reasons Microsoft Edge for macOS wasn’t ready at the same time as the Windows 10 builds is because Microsoft has been striving to make Edge look and feel like a macOS app should. Beyond this, Microsoft has also been hard at work on macOS specific features like a tab switcher and media controls on the Touch Pad, for MacBook Pro users. 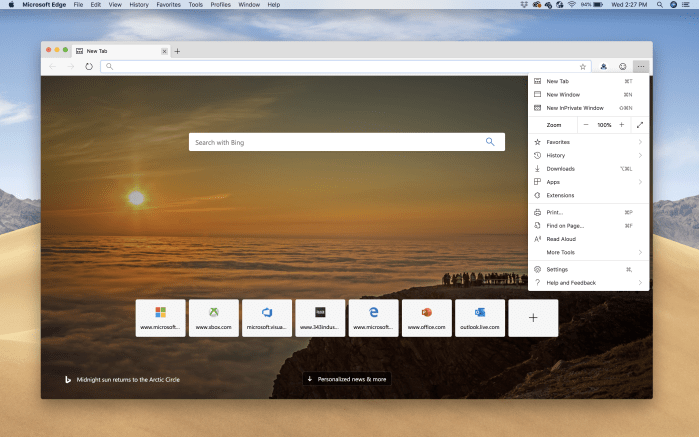 As the new Edge is heavily based on Chromium, many of Chrome’s recently developed features should be in place. This may even include the ability to respect your dark/light mode settings on macOS Mojave, as the browser has already picked up dark mode support on Windows 10.

This isn’t the first time that Edge has become available to Apple fans. Microsoft Edge has long been available on iOS, but just like every other alternative browser on the platform, including Google Chrome, it still uses Safari under the hood.

Mac users who want to get started with Microsoft’s Chromium-based Edge can download it now from the official Edge Insider website.

Here’s hoping Microsoft Edge for macOS fares better than Safari for Windows did.