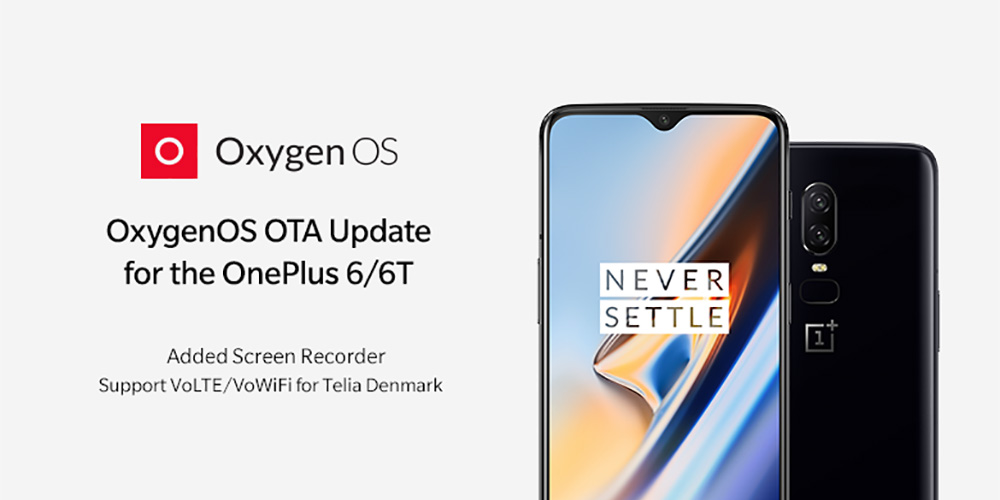 The OnePlus 6 and 6T are now receiving a couple of OxygenOS OTAs that bring the much-requested native Screen recorder feature and the June 2019 security patch.

Announced on the official OnePlus forums, the OxygenOS 9.0.15 and 9.0.7 OTAs for the OnePlus 6T and 6 respectively don’t include a massive overhaul but are still more than welcome. The Screen Recorder is the headline addition, making its way to the OnePlus 6/6T natively after it was first added to the OnePlus 7 Pro.

[Update: 07/22]: Thanks to version 2.2 update of the OnePlus Screen Recorder, we are getting added Framerate settings for your recordings and an option to hide the floating widget that appears when recording (via Android Police).

The new settings now enable to you set your framerate for recordings to 15, 24, 30 or 60fps depending on your own preference. You won’t find the OnePlus Screen Recorder in your app drawer, instead, to access these new settings you will have to press the small ‘cog’ icon that appears when you open the Screen Recorder overlay.

AP notes that they have tested on older OnePlus handsets such as the 5T, 6, 6T and it works well. While we expect a future OxygenOS OTA to add the settings very soon, you are able to download the separate .apk file and install manually if you are desperate to change your framerate and floating widget settings.

Some of you reading may have already installed a standalone application that activated the feature on older OnePlus phones. This official port will no doubt result in smoother recording without any associated issues. The June 2019 patch comes alongside the new ability to screen record with some screen rotation tweaks on top.

For those in Denmark, you now have support for VoLTE on the Telia network. One more thing to note is that the feedback tool is now integrated within the community app — which was added to recent Open Beta builds of OxygenOS.

We have had our feedback tool integrated into community app under testing in Open Betas for a while now, and it’s time for the Feedback tool to be part of our stable builds. You can now submit bug reports, product suggestions, and feature requests seamlessly from the community app and the best part is that it automatically captures the required logs based on the issue you are reporting, thus making it easier for our team to address issues and track feedback.

On the OnePlus 6, the OxygenOS 9.0.7 update weighs in at around 311MB and both OTAs should be rolling out now incrementally. That does mean that refreshing your System Updates panel might not provide you with an instant download link. It may be worth checking back every so often to see if the OxygenOS OTA is waiting.