Last week, we learned that Google is beginning to experiment with potential improvements the Chrome OS shelf, starting by offering a smaller version for clamshell Chromebooks. We’ve now learned from an internal doc that Google is making some changes to the Chrome OS app shelf and its icons, specifically in preparation for the Pixelbook 2.

As it stands now, Chrome OS app icons come in a wide variety of shapes, a situation complicated by the ability to install apps from Android, Linux, and the web. This leads to some app icons appearing larger or smaller than others. Gmail is a good example of this, as its rectangular icon is vertically shorter than most other Chrome OS icons.

Digging into the Chromium Bug Tracker, it seems Google is getting ready to change this by making more icons circular instead. In a pair of issues that reference a Google internal link “go/atlas-shelf”, we find a pair of cropped screenshots from what appears to be an internal Google Doc. Atlas, as you may remember, is the internal codename of the device we believe is the Pixelbook 2.

In the images, we see two potential default layouts for the Chrome OS shelf on the Pixelbook 2, one that starts with seven default apps, and one that starts ten. In true Google fashion, these are marked “A” and “B.” 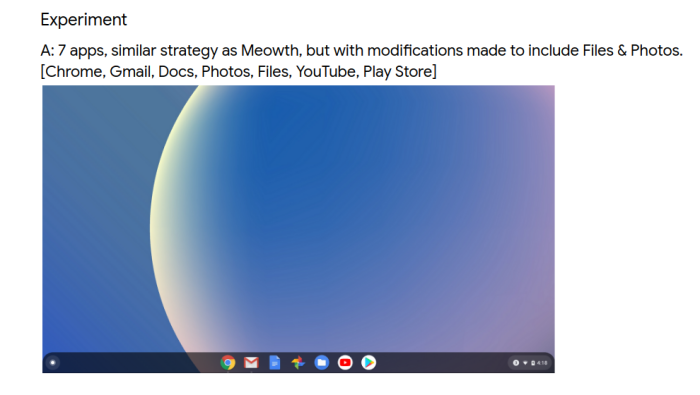 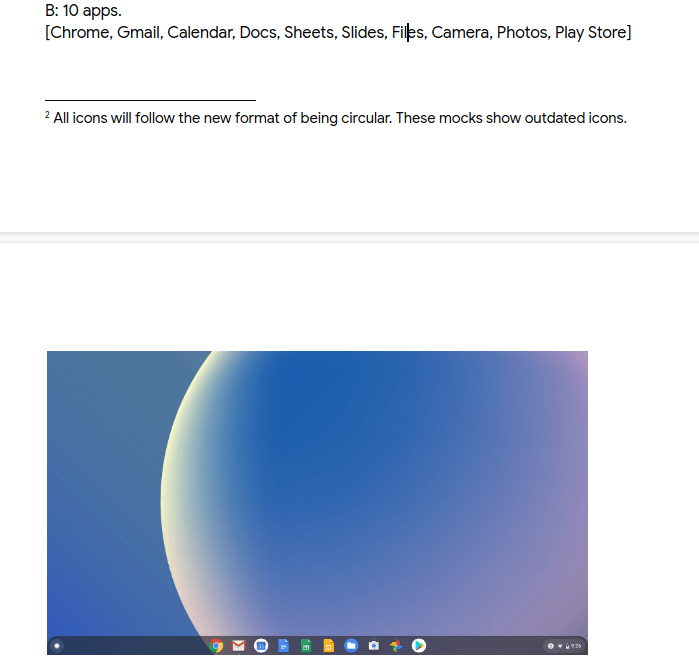 It’s honestly interesting to see into Google’s decision making process a seemingly insignificant detail of a (likely) Made by Google product, even referencing the Pixel Slate’s original codename, Meowth. But take a closer look at the footnote.

All icons will follow the new format of being circular. These mocks show outdated icons.

Since what we see in the “mocks” is the same as what we see on Chrome OS today, these new circular format icons must be coming soon at least to the app shelf, if not the launcher as a whole. But what exactly does that mean?

At the very least, the default Google app icons seen on Chrome OS will take on a circular shape, replacing their current rectangular (Docs, Gmail, etc.) or triangular (Drive) shapes, which would at least give a consistent look for new Chromebook owners.

What’s not known is whether other apps will also be pushed to use circular icons. Google has been pushing recently for consistency in app icons on Android, which could perhaps be applied to making those apps consistent on Chrome OS too. That still leaves the question of Linux and Web apps, where Google has far less control over developers’ design decisions.

Either way, given that the internal doc appears to have close ties to the Pixelbook 2, we likely won’t see what precisely Google has in mind for the new circular icon format on Chrome OS for a few more months.