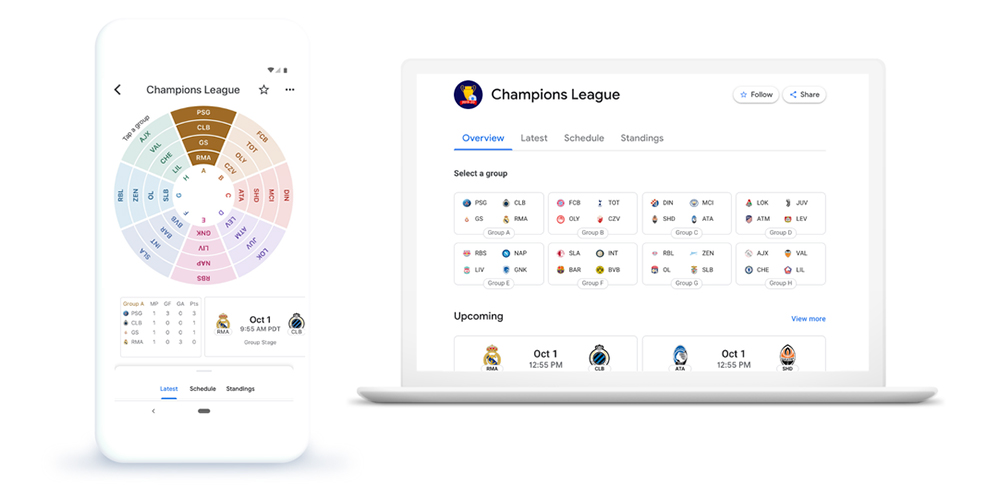 For those not aware, the UEFA Champions League is Europe’s top-division club football tournament that although currently into the group stages, continues throughout 2019 until early 2020, with the final itself taking place at the Atatürk Olympic Stadium in Istanbul on May 30.

This new Champions League partnership means that alongside the current enhanced Search features, you’ll be able to get pre-match, live, and post-match update and video highlights of every single game. During each match, you’ll get live test commentary alongside a new “insights” panel that gives you core information such as team form, transfer rumors, and player injury news. It even collates the best tweets from media, reporters, and the clubs themselves.

This new tailored mini-blog will act as a new hub for your second-screen match-day experience that collates all of the most important tidbits into one easy-to-access panel. Google has created a new wheel format for iOS and Android for easy viewing every fixture during the Champions League Group and Knockout stages.

With 32 teams competing for the coveted 65-year-old Champions League trophy, having easily digestible information on all games in play is really handy for the avid football fan. Similarly, a more familiar layout is retained on desktop but still offers all of the in-depth information of the on-field and off-field antics in more manageable chunks.

For stats nerds and even those that like to gamble on the outcome of ties, this might be a neat little addition that keeps you up to date with every team you happen to follow. The new update should be rolling out right now across all platforms.