Google today published what games will be playable through Stadia starting Tuesday, November 19th. There are 12 in total, with the company also previewing an additional 14 that will be “available by the end of the year.”

This Stadia launch games list lines up with everything that has been announced at Stadia Connect and during publisher events in recent months. According to the Stadia team, these titles have been “carefully-chosen” and that “there’s something for everyone here: a library of superb, critically-acclaimed titles spanning multiple genres and age ratings.”

Besides Destiny 2, which is included as part of Stadia Pro from Founder’s Edition, Premiere, or the Buddy Pass, these other titles can be purchased from the Stadia app next Tuesday. Pricing was not announced today, but it should be similar to other platforms.

The Assassin’s Creed game used to demo Project Stream last year is included, while three of them are from the Tomb Raider series. 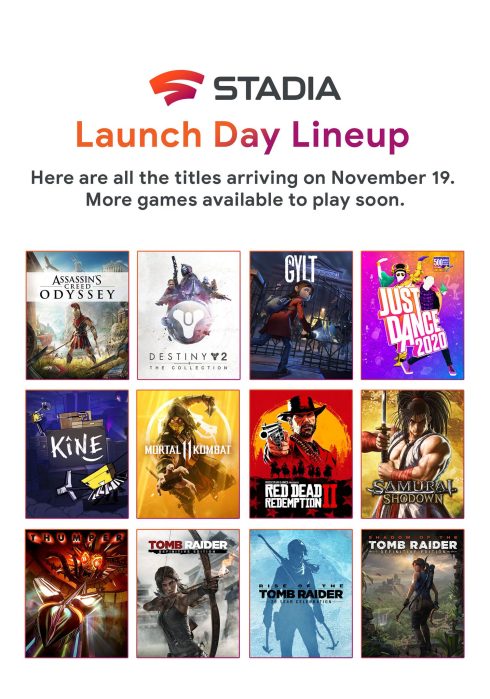 In addition to the Stadia launch day game lineup, Google shared what’s coming later in November and December, though it warns “Dates Subject to Change.” [Update: Football Manager 2020 might also be a launch title.]

Meanwhile, titles that are coming next year include Doom: Eternal, WatchDogs: Legion, Gods & Monsters, and Cyberpunk 2077.