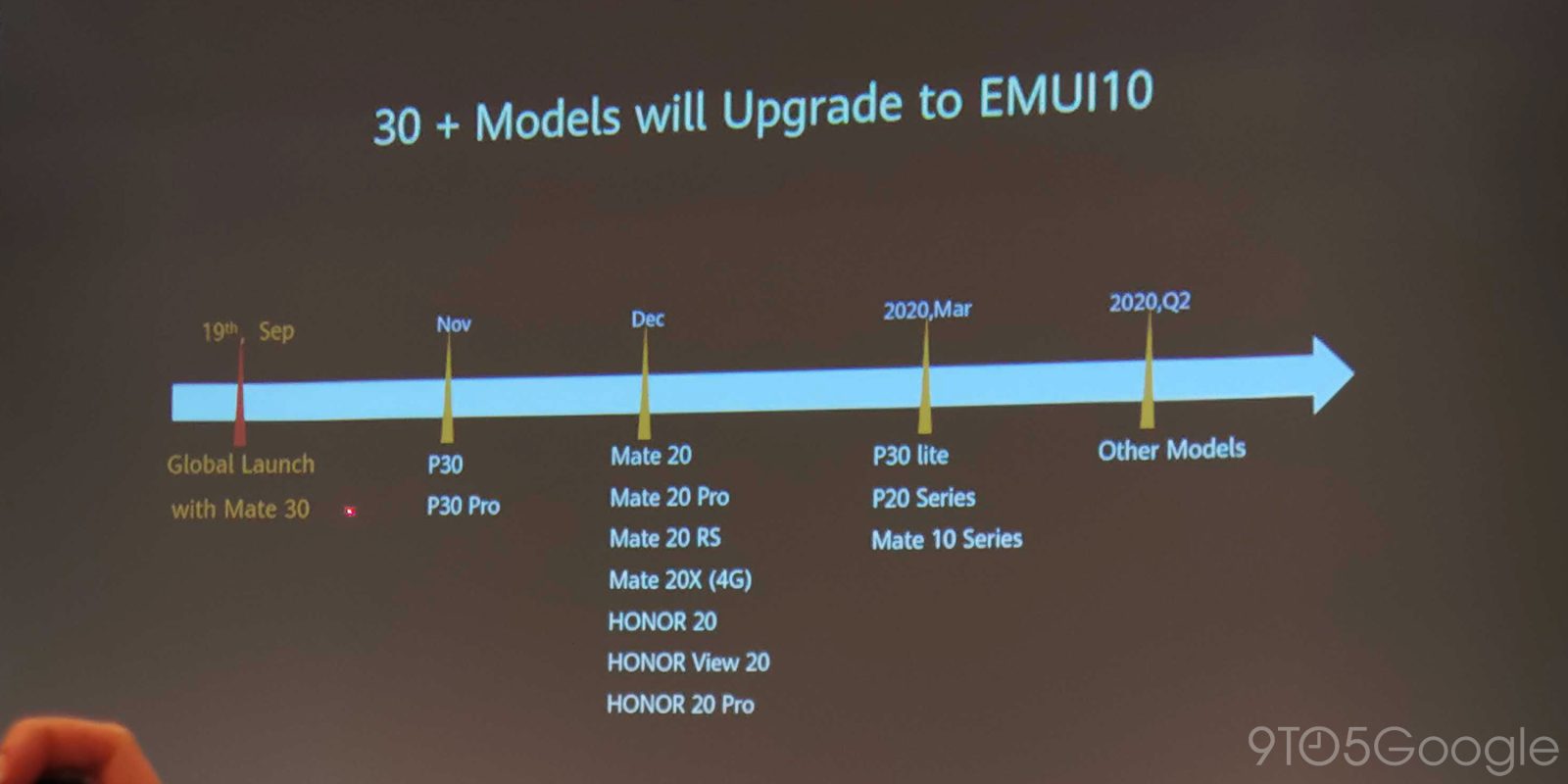 At IFA 2019, Huawei confirmed the road map for the EMUI 10 update in a session on the new OTA. It appears that the company has plans to seed the OTA to over 30 devices by Q2 2020.

The full update is expected to head the Huawei P30 Pro first in Western markets, as we are still unsure which version of the third-party skin will adorn the upcoming Mate 30 series due to the Android licensing and trade currently in place.

[Update 11/14]: The stable EMUI 10 update is now rolling out in Europe for the P30 Pro and Mate 20 Pro (via Reddit). For those of you already on the EMUI 10 beta on your P30 Pro, you should see software version 10.0.0.168 heading to your device over the coming days and weeks. We’re seeing reports of the OTA heading out in Spain, Serbia, and pockets of mainland Europe — although I’m not seeing it just yet on my unlocked UK P30 Pro.

As for the Mate 20 Pro the EMUI 10 update is also having the same European rollout (via HuaweiCentral). Both OTA files are pretty big at over 4.5GB, so we’d suggest ensuring you’re connected to a Wi-Fi network to download and install the full OTA update.

To check if you have the stable EMUI 10 update waiting for your P30 Pro or Mate 20 Pro, head to Settings > System > Software updates and check for updates here. Alternatively, you can head into the HiCare app and update from here. If you have seen the EMUI 10 update on your device, let us know down in the comments section below.

If you’re in Europe, Asia, Malaysia or Latin America, the updates should be available to those enrolled on the EMUI 10 beta programme in the coming days. Each region gets a specific firmware build with carrier localizations, so be sure to check your device right now.

A Weibo post confirmed the update timelines for the entire EMUI 10 beta programme but it’s worth noting that we’ve seen dates slip in the past, meaning these are not guaranteed to be concrete. Some handsets will get access to an open beta, whereas others are part of a closed beta.

[Update: 09/12]: It appears that there was some sneaky fine print that states we won’t see the full EMUI 10 update on over 30+ devices but rather the EMUI 10 beta. While that isn’t anything to be majorly disappointed by, it makes more sense due to the fact that EMUI 9.1 still isn’t on some of the devices listed.

Eagle-eyed, former 9to5Google team member Cam Bunton spotted the fine print at the same EMUI 10 briefing, something that wasn’t made clear by Dr Wang Chenglu during the keynote. Clearly our own view was obscured, which accounts for the original mix-up.

That does mean, however, that you will be able to enrol in the EMUI 10 beta rather than wait for an OTA download to come through and have a painful wait for the full release.

That EMUI 10 release timeline story doing the rounds – missing a key tiny bit of fine print. Easy to miss, but it’s the schedule for the beta rollout. Not full release. pic.twitter.com/AGb5FZxeva

While it’s disappointing and confusing for the upcoming crop of new Huawei devices, many of the previously released devices have retained Android licenses. This means that we can expect to see the full EMUI 10 update on previously released hardware without any such restrictions.

So thanks to this road map, it means that you’ll be able to update your Mate 20, Honor 20, P20, or Mate 10 get the fully-fledged version of EMUI 10 with all of Google Play Services intact by Q2 2020. This is, of course, wishful thinking, as we are still awaiting the full EMUI 9.1 update for a number of core Huawei and Honor devices at this late stage of 2019.

Given the issues surrounding Huawei and the US government, it’s unclear if we may face delays in the rollout. For that reason, we would always suggest taking these timeframes with a heavy dose of salt.

Having already had time with the OTA update, we can confidently say that is is the best version of EMUI ever released. It should alleviate many of the complaints that many have leveled at the skin for some time.

Beta registration has just opened up for the EMUI 10 update for those with the P30 Pro. You can register to trial the software ahead of the full release later this year. To do so, simply click here and follow the instructions.