Google’s Flutter SDK lets you create apps for Android, iOS, desktop, smart displays, and even the web. Thanks to that web support, it’s now possible to try out Flutter in the DartPad web app and get started making apps with nothing more than your browser!

For years now, Google has offered a web tool called DartPad as a quick and easy way to test out snippets of their Dart programming language right from your web browser. As Dart is the language used by Flutter, DartPad also served as an easy way to test some of the “business logic” of Flutter apps, while testing the UI required running your app on a device.

Earlier this year, Flutter gained early support for creating web apps with the same Dart code you used for mobile versions, and with that, it became a no brainer for DartPad to gain full Flutter support. After a lengthy “experimental” period, Google has announced today that DartPad has been given a refreshed UI and support for working with Flutter.

To get started, head over to the app’s new URL, DartPad.dev, click “New Pad,” then choose between either a plain jane Dart pad or a new Flutter pad. 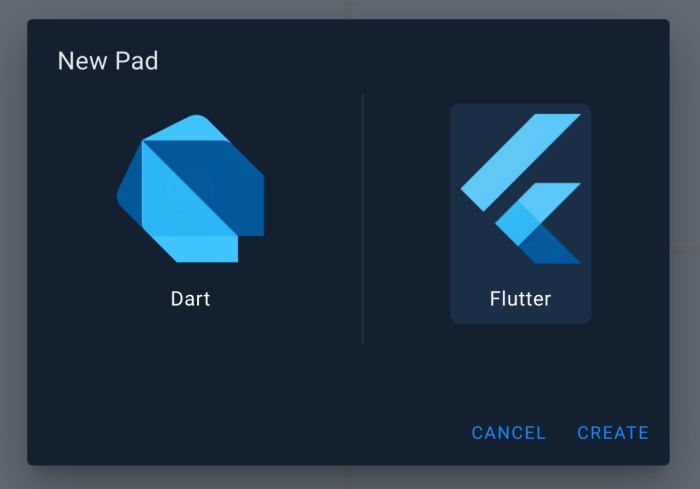 When you start a new Flutter pad on DartPad, you’re given the basic boilerplate template needed to test out almost any widget’s code. Additionally, DartPad is also able to run gists from GitHub by simply adding the gist’s ID to the end of the DartPad URL, like so. This is great both for running examples written by others and sharing your own work with the world.

If you haven’t yet checked out Google’s insanely cross-platform Flutter SDK, DartPad has now made it easier than ever to get started learning app development.