Every year, in the build up to the launch of the next version of Android, Google launches a beta and developer preview period for that update, usually starting with Pixel devices. Today, the landing page for the Android 11 Developer Preview went live, if perhaps earlier than intended.

The improvements coming with Android 11 are still something of a mystery to us at this point, though we’ve seen hints at features like ‘Share-to-Print‘ and dark mode scheduling.

As spotted by Android Police, today, we’re getting our first actual clues to Android 11’s feature set and when we’ll be able to get our hands on it, thanks to a whole page dedicated to the Android 11 Developer Preview. Before it was swiftly reverted to be about Android 10, we found the three core tenets Google shared about what developers should expect from Android 11.

The explicit mention of foldables shouldn’t be a surprise, as Google has already been hard at work making foldables an accessible form factor for OEMs and developers both, with a foldables-specific SDK and emulator announced side-by-side with the original Galaxy Fold. With Android 11, it seems foldables will be given more direct, explicit support. 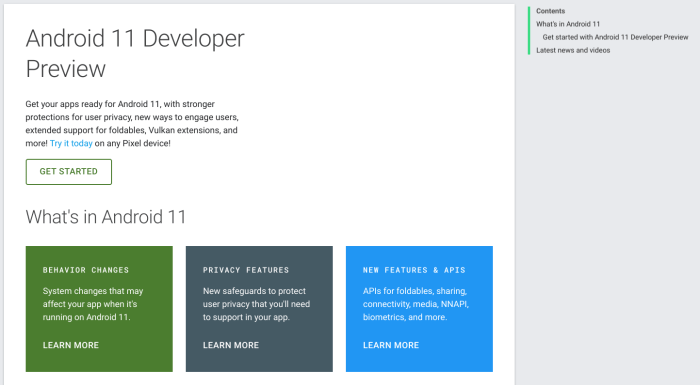 None of the links on the page — such as to enroll your Pixel into the Android 11 Developer Preview or download a factory image to flash onto your phone — were working, leading to pages from last year’s beta program. On that note, it’s interesting that Google refers to it as an Android 11 “Developer Preview,” as Android 10 debuted last year as the “Android Q Beta.”

From the page’s quick removal, we can only assume that it was simply pushed live too early. Android Q Beta 1 didn’t arrive until the middle of March, and we don’t have any reason to believe Android 11 Developer Preview 1 or Beta 1 would be any different.

This post and its headline originally stated that the Developer Preview page was live, and was updated to reflect its removal.