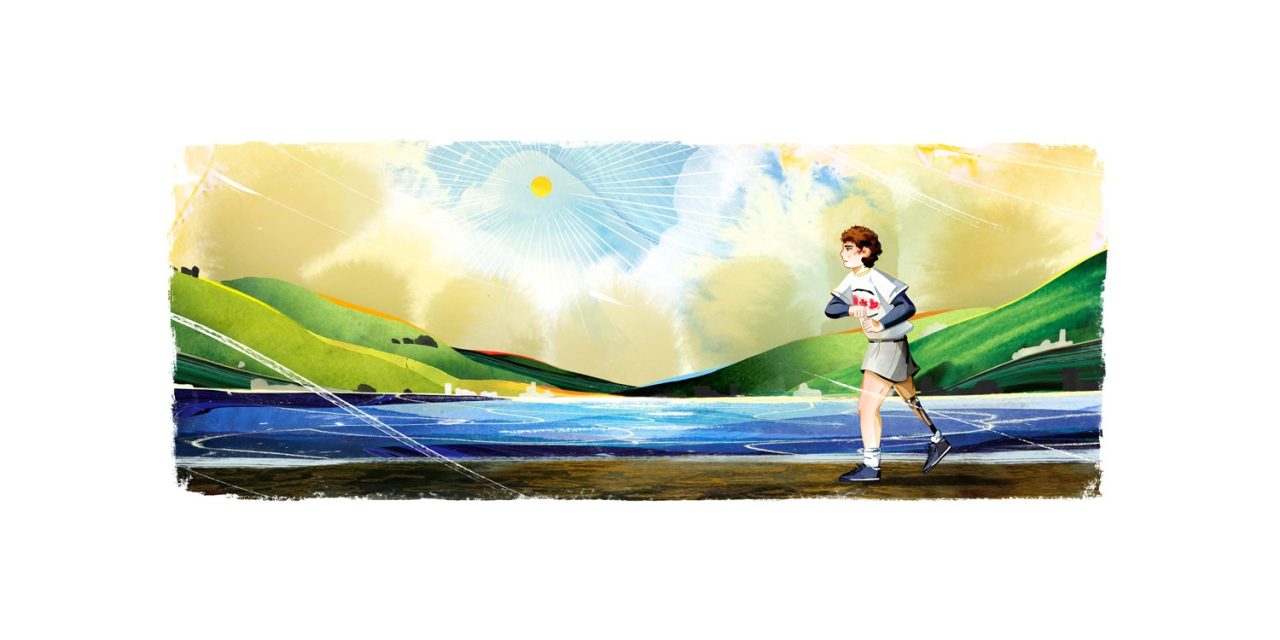 Today, Google is remembering Canadian athlete and cancer activist Terry Fox by replacing its homepage logo with a beautifully illustrated and inspirational Doodle.

Born on July 28, 1958, Terry Fox grew up participating in a variety of sports and athletics including basketball, soccer, and distance running. At the age of 18, Fox was diagnosed with bone cancer in his right knee, which forced doctors to amputate his right leg.

Seeing others in the children’s cancer ward, and inspired by Dick Traum — the first amputee to complete the New York Marathon — Terry Fox made a decision to keep running, to encourage people to donate money to cancer research.

I soon realized that that would only be half my quest, for as I went through the 16 months of the physically and emotionally draining ordeal of chemotherapy, I was rudely awakened by the feelings that surrounded and coursed through the cancer clinic. There were faces with the brave smiles, and the ones who had given up smiling. There were feelings of hopeful denial, and the feelings of despair. My quest would not be a selfish one. I could not leave knowing these faces and feelings would still exist, even though I would be set free from mine. Somewhere the hurting must stop….and I was determined to take myself to the limit for this cause.

After 14 months of physical training with his artificial leg, Terry Fox participated in a public marathon then announced to his family that he would run the entire length of Canada from east to west. Fox embarked on this “Marathon of Hope” on April 12, 1980, from the shore of the Atlantic Ocean, proceeding one marathon length (26 miles) per day, with his brother and a friend supporting from a van.

Tragically, after 143 days and 3,339 miles, Terry Fox’s goal was cut short as he requested to be brought to the hospital for chest pains and coughing fits. At the hospital, it was discovered that the cancer had spread to his lungs and that he would likely never be able to resume the Marathon of Hope.

Following that news, fundraising events were held in his honor that brought the total raised for cancer research from $1.7 million all the way to $23 million. Terry Fox died less than a year later, on June 28, 1981.

On this day in 1981, the first Terry Fox Run event was organized across 760 sites around Canada, held in his honor and at his request. Now, these marathon events happen around the world on the second Sunday after Labor Day, raising funds for cancer foundations worldwide. Today’s Google Doodle in honor of that first event and of Terry Fox’s powerful life features a moving depiction of Fox’s original Marathon of Hope, with the clouds in the background spelling “Google.”

Despite the challenges that the world has faced in 2020, it’s still possible to sign up to participate in a Terry Fox Run, with the next event set to take place on September 20. As many of us are still encouraged to practice social distancing, you can participate in a Terry Fox Run from anywhere that it’s safe for you to run, rather than in specifically organized locations. Or, if running isn’t your style, consider donating to one of the participants’ causes through the official website.