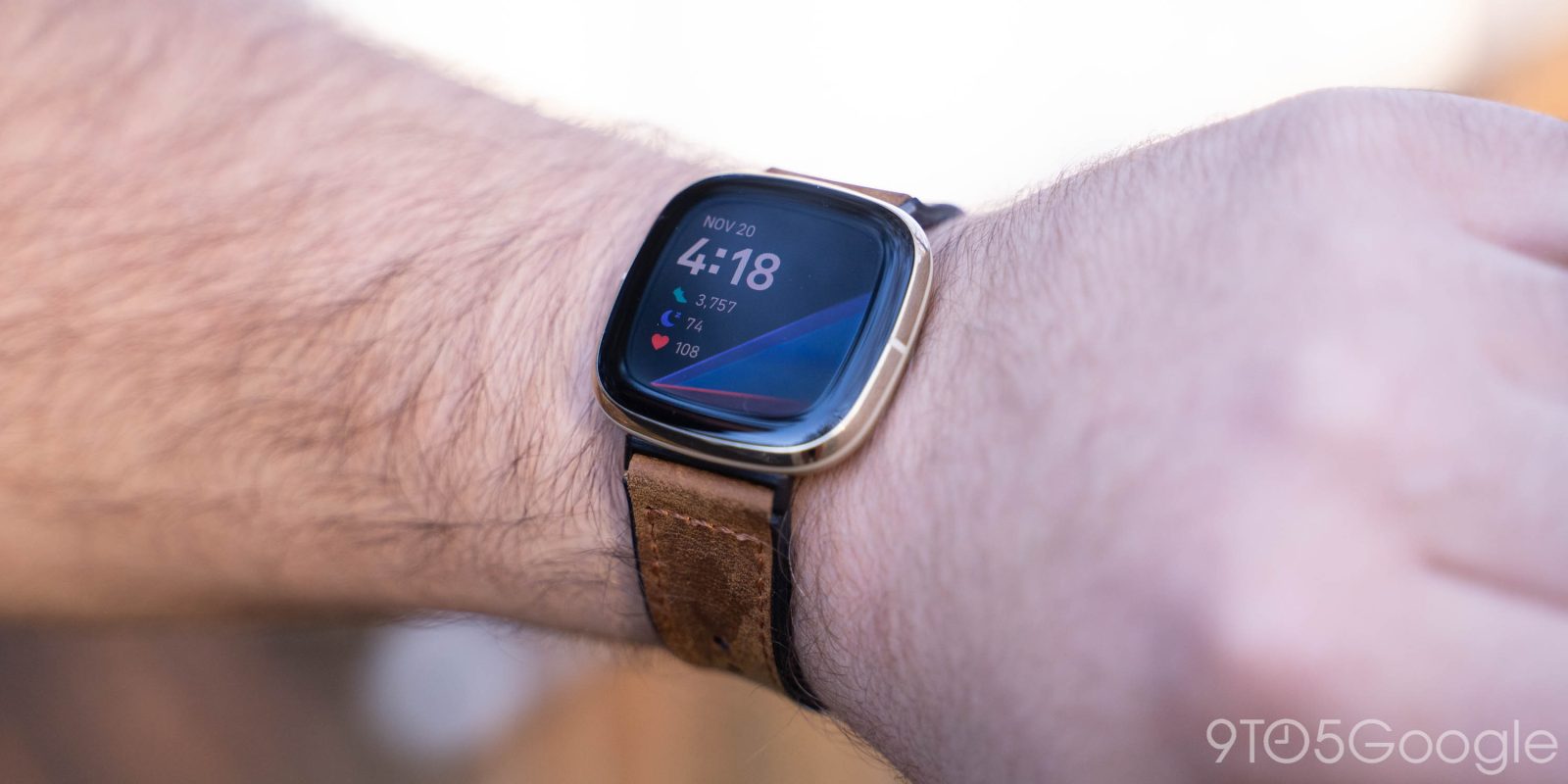 The state of smartwatches on Android has been relatively unimpressive. Google’s Wear OS platform has a decent foundation but lacks any strength when it comes to health features. That’s why Google in the process of buying Fitbit. Over the past couple of months, I’ve been wearing the Fitbit Sense and Fitbit Versa 3, the brand’s latest smartwatches, to learn what all the hype is about. While, personally, I still wish the operating system on these watches was closer to Wear OS, I finally see what all the hype is about in the health department. Here’s what you need to know about Fitbit Versa 3 and Fitbit Sense.

Let’s kick things off by talking about the design. I’ve always been a fan of round watches, but Fitbit opts for the square design, and it works. Even in the admittedly good-looking gold colorway, I’d never call this design classy or striking, but it’s not ugly and fits really well on my wrist. As mentioned, I’ve been using the gold model for the Fitbit Sense, but I’m not a particularly big fan of the colorway. It looks good with the included “Lunar White” band, but the “Charcoal” woven band and third-party leather bands I used were far from a good fit for the color. The black Versa 3, on the other hand, was a much more universal fit. I just wish that Fitbit offered a grey/silver variant like they did on the Versa 2.

In any case, the hardware itself is also very sturdy and well put together. The Sense took a heck of a beating over the couple of months I wore it, including a couple of face-first drops onto hardwood floors. Still, it held up well and shows no sign of damage whatsoever. I do have two grips about the hardware, though.

First, I’m not a fan of Fitbit’s new band mechanism. Instead of a classic pin system, Fitbit has a system that’s eerily similar to what the Apple Watch offers. It works and gets the job done, but I found that some third-party bands could slip out of the housing and also that even official bands feel weirdly loose when connected. I’ll give credit where it’s due, though; I’m shocked at the number of bands already out on the market that can use this new system.

As far as the new “Infinity Bands” go, they’re fine. I find them a bit cumbersome to actually put on, but once they’re on, they feel comfortable and would really struggle to come off without purposefully removing the band.

My other major complaint is the side “button.” On the Versa 2, Fitbit used a physical button on the side of the watch, but the Sense and Versa 3 remove that for a pressure-sensitive area. It… works, but it doesn’t work very well. In my experience, I usually had to reach a bit underneath the actual watch to get the area to trigger, as well as having to squeeze uncomfortably hard. The divot that tells you where to press is also very small. Overall, I just wish Fitbit had stuck with the physical button that worked so well.

On the software front, Fitbit OS 5 is on these new smartwatches with a refreshed design, some new features, and more. Personally, this was my first time using a Fitbit smartwatch for an extended period of time with everything being new to me, so let’s look at the basics first.

Navigation is simple enough. The “button” on the side of the watch will always bring you back to your homescreen while a swipe from left to right will go “back” in whatever you’re doing. It’s a simple concept and similar enough to other platforms that even those switching from another smartwatch will quickly understand it. From the watchface, you can swipe down to access notifications that are stacked in reverse chronological order, the clear all button being pushed all the way to the top of the list. Swiping up reveals a “hub” of widgets you can customize that include the weather, various health stats, and shortcuts to specific fitness/health functions. Swiping on the watchface from right to left reveals the app drawer, a 4×4 grid of pages that contain all of your apps which are managed through the Fitbit app on your phone. Finally, a left to right swipe reveals quick settings.

Notifications are a core part of any smartwatch, so I’m a little disappointed that the Fitbit Sense let me down in this area. Connected to a Galaxy Fold 2, I felt that my notifications were never fully reliable, often either not alerting me on the watch or at least not lighting up the display to help draw my attention. This could be a bug specific to my phone, but given that Samsung phones make up the majority of Android phones, it’s not ideal. When it does work, though, the notifications are mostly easy to read — although I hate how some, like Twitter, are organized/styled — and have clear and easy actions when you expand them fully.

Apps on Fitbit OS 5 work well enough, though I feel like “discovery” is lacking. Out of the box, you’ll find preloaded apps including Spotify, Starbucks, Alexa, Find my Phone, Pandora, Deezer, and more. Many of the included apps are simple, such as agenda or alarms. There are also apps for weather and “Today,” but I felt the former was adequately covered by the “hub” and the latter by the full Fitbit app on your phone.

Of course, you can also change your watchface on Fitbit smartwatches, though I find this is a bit lacking. Fitbit’s first-party options are mostly solid. I really love the “Spectrum” face that comes default on the Sense. There’s a store full of additional options, but it was pretty rare that I found one I truly liked. Many of the good ones are locked behind a paywall, and it feels really odd to pay the developers directly for those faces. I get the idea, but it feels inherently sketchy to buy watchfaces when each one has a different method of purchase.

As far as performance goes, I’d describe it as adequate. The experience is by no means smooth with noticeable skips and hiccups in the animations, but it’s also not unbearably slow either.

Rounding this out, let’s talk about voice assistants. Amazon Alexa has been supported on Fitbit for quite some time, but Sense and Versa 3 are the first options packing Google Assistant. We’ve gone a bit more into detail on this in another post, but the short of it is that Assistant works wonderfully on Fitbit’s latest smartwatches with speedy performance, a decent interface, and the same functionality we’ve come to know and love. In short, it gets the job done.

The core of any Fitbit product is fitness and health tracking, and both the Sense and Versa 3 shine here. On both smartwatches, you’ll get step tracking, sleep tracking, and heart rate monitoring. You shouldn’t expect perfectly accurate details as with any smartwatch, but Fitbit has been in this game for quite a while, and they’re very good at it. These smartwatches can also track a ton of different workouts through the exercise app and help you calm your mind with “mindfulness” sessions.

That all comes together with the Fitbit app on your phone that displays this data in an easy way, which is also heavily details. The main screen shows your core stats such as “Zone Minutes” (time you’ve actually spent active), your step count, floors climbed, miles walked, and calories burnt. Below that, you can find information on your sleep, your heart rate, and more.

Fitbit also shows weekly and daily exercise goals. All of it combines for a good picture of your activity and ends up being pretty encouraging for you to continue to get better. It’s the app that really ties this all together. Wear OS, Samsung, and Apple watches can also track a lot of this data, but Fitbit puts it together well. This is exactly what Google needs, honestly. And with a more modern design courtesy of Google, I think this would all come together nicely. At least, if the Google/Fitbit deal works out.

On the Fitbit Sense, too, there are some additional features. The most notable is the needed sensors and software to take an electrocardiogram (ECG). This is something that not every smartwatch has, with Fitbit being in good company with Apple and Samsung in supporting the feature in the US. I can’t speak to how it compares, but the feature works rather quickly and reliably.

The Sense also features an EDA sensor and skin temperature sensor. This allows further insight into your state of well-being, but personally, I don’t think these features should make or break your decision. These are details most people don’t need or want to know. Heck, months into my usage of the Sense, I still don’t really understand why the temperature of my skin is really important.

Fitbit promises about 6 days of battery on both the Sense and the Versa 3. In my experience with the Sense, that claim doesn’t live up. On average, I hit the 20% “low battery” warning about 3-4 days after a full charge. That led to me charging the watch up every few mornings for the time it took me to shower and get ready for the day.

I spent considerably less time with the Fitbit Versa 3, but I can say with confidence that the battery life is considerably better. Generally speaking, I could hit the 6-day estimate with relative ease, though turning on features such as always-on-display can quickly ruin that total. In any case, I’ve found that Versa 3 has considerably better battery life compared to Sense. I don’t think anyone would be disappointed with either option, though.

Another bit of good news with these latest releases is that charging is easier than ever. The magnetic charger included with both of these watches is a big step up over the awkward clamp used in previous years. It’s a strong connection that always lines up perfectly, though I do wish it worked on both sides. As it stands, you have to place the watch on the charger in the correct orientation; otherwise, it won’t line up. A small nitpick, but one that did frustrate me more than once.

Fitbit Sense or Versa 3: Which is for you? |

$100 price difference is no small matter, and there’s a clear winner

Even two years ago, I wasn’t a fan of Fitbit’s smartwatches. As much as I did want the improved feature set for fitness and health, I couldn’t get past the design and software. Now, I feel Fitbit has struck a good balance. The latest Wear OS smartwatches are better smartwatches compared to Fitbit Sense and Versa 3, but Fitbit absolutely destroys Google Fit when it comes to fitness and, more importantly, health.

So, which option is the one for you? Personally, I think the choice is obvious. The Fitbit Versa 3 is $229 and has 90% of the features of the $329 Sense. For the vast majority of people, it’s the better choice of the two.