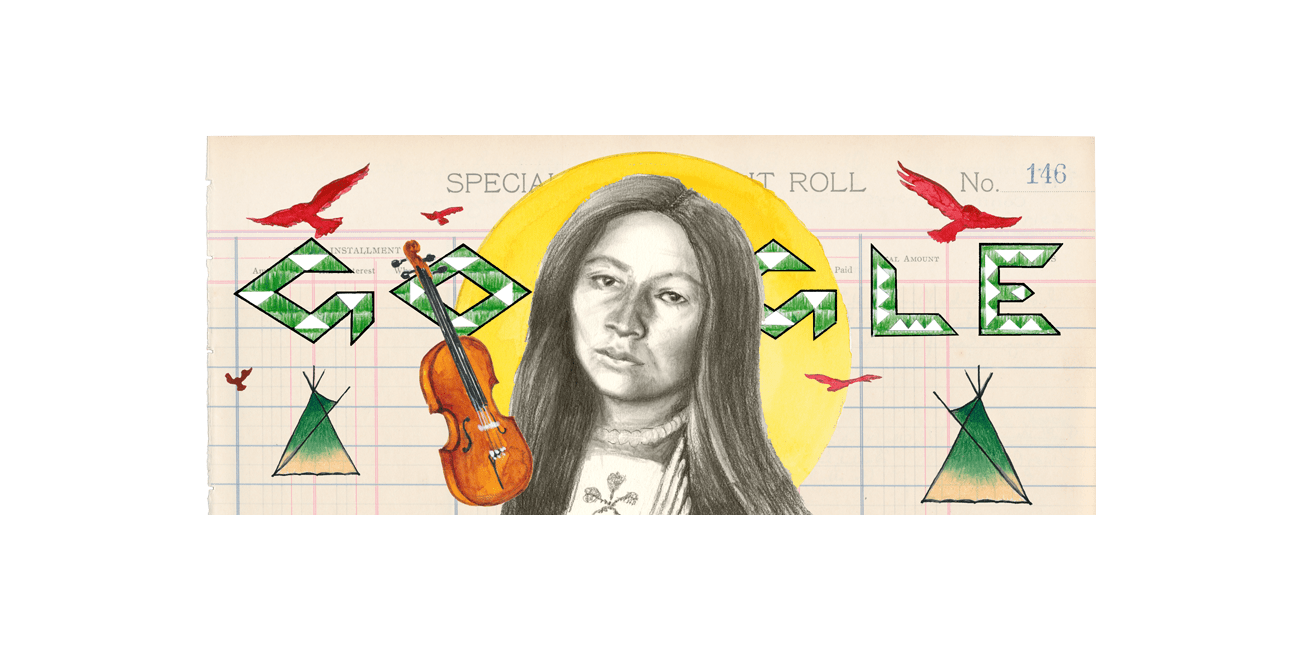 Google has replaced their homepage logo with a Doodle celebrating the 145th birthday of Zitkala-Sa, a Native American musician, composer, and suffragist.

Zitkala-Sa — whose name means “Red Bird” in Lakota/Lakȟótiyapi — was born on February 22, 1876, on the Yankton Indian Reserve in South Dakota. At age eight, she was recruited by Quaker missionaries to attend a local school that welcomed children regardless of their heritage or skin.

While the school, White’s Indiana Manual Labor Institute, was an excellent opportunity to receive an education in English, it also distanced Zitkala-Sa from her tribe spiritually and culturally. Students there were forced to speak only English, cut their hair, and follow the Quaker’s religious practices. It was also here that Zitkala-Sa discovered one of her greatest joys in learning how to play the violin as well as the piano.

At a time when American society was seeking to assimilate Indigenous culture and keep women oppressed, Zitkala-Sa fought for her right to be a Yankton Dakota woman. This was exemplified in her latchkey work in getting US citizenship status for American Indians through the passing of the Indian Citizenship Act of 1924.

Zitkala-Sa also used her numerous artistic talents to show the world the beauty of Indigenous culture. In 1901, she published Old Indian Legends, a collection of oral stories of the Dakota tribe. Later, in 1913, she wrote both the songs and the libretto of The Sun Dance, the first Indigenous American opera, with a strong basis in Sioux traditions and music.

Over on the Google Doodle blog, the guest artist responsible for the Zitkala-Sa Doodle, Chris Pappan, shared some of the deeper symbolism and meaning that can be found in each part of the artwork.

All of the elements in the artwork relate to Zitkala-Ša’s life in some way. Her Lakota name translates as “Red Bird,” she wrote an opera relating to the Sun Dance, and she was an accomplished musician—all reflected within the Doodle. She also witnessed great upheaval and change throughout her life, as symbolized by the tipis. The lettering for “Google” is based on a beadwork design from one of her traditional dresses.