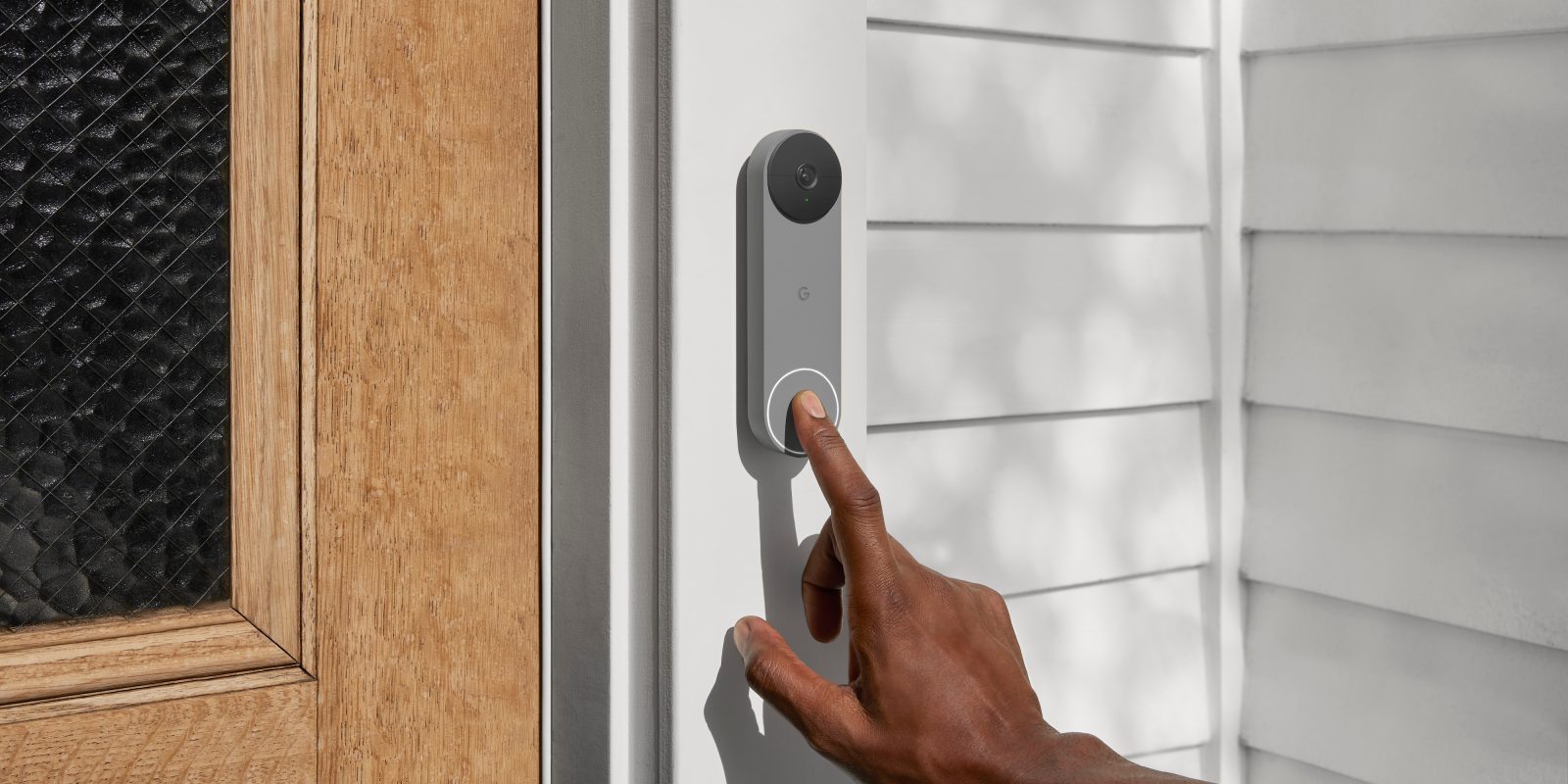 The last security camera to come out of Google’s Nest brand was the Hello doorbell over three years ago. Google today announced a successor with the Nest Doorbell.

This makes for a less bulbous look with the Nest Doorbell featuring an architecture-inspired design that comes off as being quite stark and minimalist. You can choose one of four colors for the front and side of the device: Ash (dark gray), Ivy (dark green), Linen (beige), and Snow (white). This enclosure is made from 46% recycled plastic, while there’s an IP54 rating with Google testing for drop, rain, and wind resistance.

The button visitors press is at the very bottom and surrounded by a white LED status ring that lights up on approach — thanks to a passive infrared sensor (PIR) sensor — and pulsates after a tap to signal ringing. There’s also an RGB indicator up top that tells visitors when someone is viewing the live feed or footage is being uploaded (securely with in-transit and at-rest encryption) to the cloud.

Up top, the camera itself is black and surrounded by a thick ring. There lies the 1.3-megapixel sensor that records at HD (960×1280) 30FPS quality in a 3:4 aspect ratio that allows you to see head-to-toe while boxes as close as 8 inches away from your door will be visible. There’s a 145-degree field-of-view with 6x digital zoom, HDR, and Night vision. The latter feature is made possible by four 850nm infrared LEDs with IR cut filter that lets you see up to 10 feet in the dark. Other specs include “high-quality” speakers and microphone with noise cancellation for two-way conversations.

Internally, the Nest Doorbell is powered by a 1.5GHz processor that features an ML hardware engine (TPU). On-device machine learning is a big part of Google’s new camera lineup, and it allows for free person, package, vehicle, and animal detection that doesn’t require a subscription. Processing occurs locally and therefore runs much faster. Also free is up to three hours of event video history (i.e., clips) and user-created activity zones.

The Nest Aware subscription enables the familiar faces detection feature and up to 60 days of event-based recording. However, this Doorbell — compared to the Hello — does not support 24/7 video history with either battery or wired installation.

This is due to continuous recording being a drain on the battery. Similarly, constant streaming when hooked up to power poses thermal challenges (especially for something installed in direct sunlight) that would have required “larger hardware enclosures.” For those that need 24/7, Google will keep selling the “Nest Hello” and is renaming it to the “Nest Doorbell (wired).”

That new built-in power source allows you to go between one to six months without a charge, which is conveniently done via a USB-C port on the rear. The rechargeable nature greatly simplifies the set-up process with “wire-free” installation that plays the ringer on your Assistant Smart Displays and speakers. That said, you can have it trickle charge with existing wires and ring your normal chime.

Google’s offers these battery estimates based on typical scenarios:

Another feature made possible by the battery and on-device storage is offline recording for up to an hour, which translates to about a week’s worth of clips. This local backup sees footage uploaded to the cloud when your power/Wi-Fi connection is restored.

It’s launching in Japan a few days later, on the 26th, while Mexico will get it later this year.  All four colors are only available in the US, with the rest of the world just getting Snow.