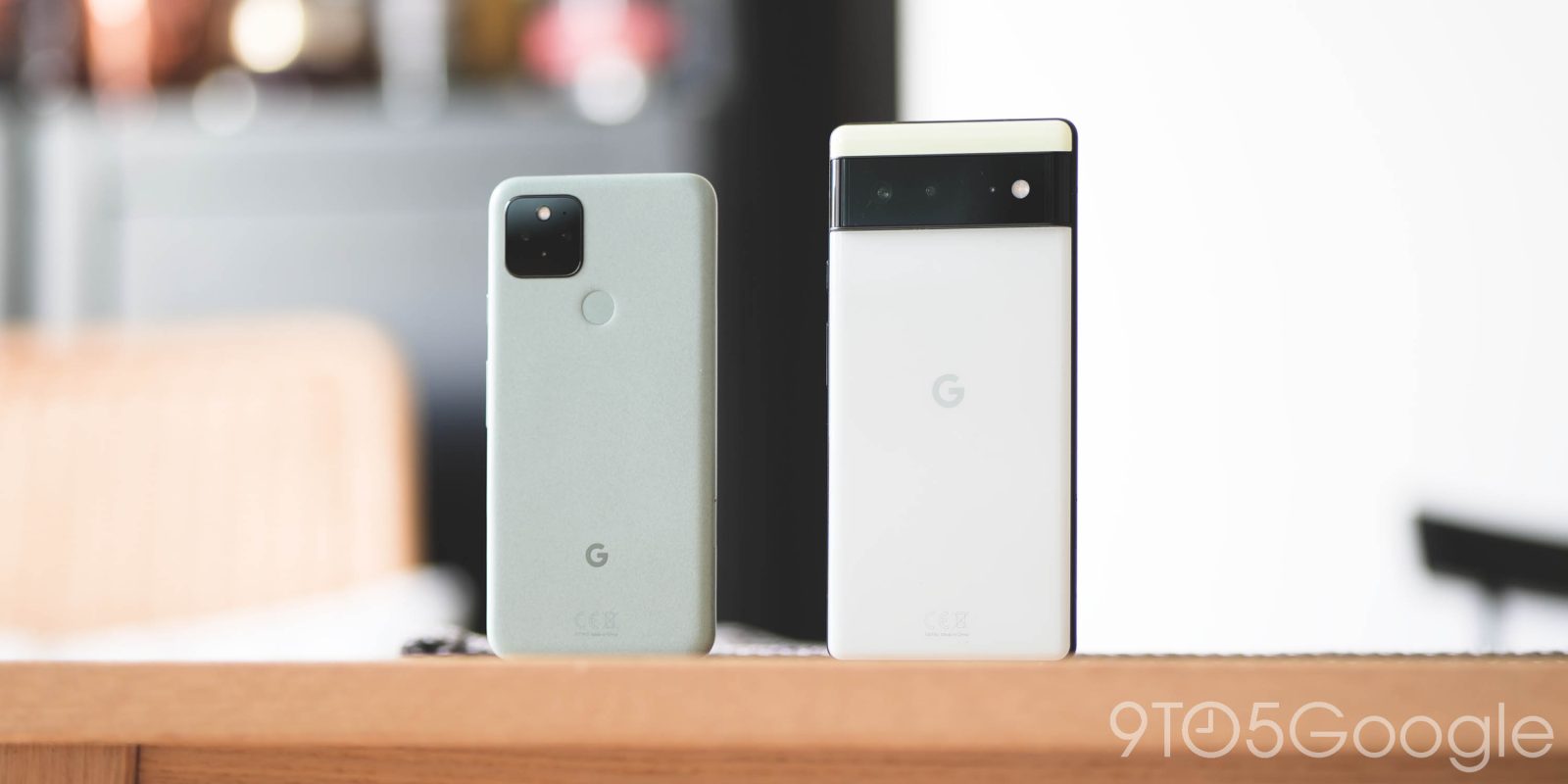 The Pixel 5 didn’t live up to some expectations, but even so, it seems ridiculous to be even suggesting that after 12 months, someone “should” upgrade from the Pixel 5 to the Pixel 6. We’re here to examine whether this is a thought you might or should have at this stage of 2021.

2021 is a big shift in Pixel with the introduction of Tensor and some massive improvements over the Pixel 5. While last year Google’s focus with the previous iteration was on building a device that resolves some of the glaring errors of past devices, then backing it with the best possible software experience, this year is entirely different.

Things are very different with the Pixel 6 and the Pixel 6 Pro. The focus this year is on a true, out-and-out end-to-end flagship Made by Google smartphone. While the Pixel 5 felt like a reset, the Pixel 6 series seems like a rebirth – and all for the same entry price as last year’s mid-ranger.

While the Pixel 5 is a great phone in its own right, you might be looking at the Pixel 6 with an envious glance. To make things a little easier, we’re going to guide you through the differences between the late-2020 flagship and the standard Google Pixel 6.

Video — Google Pixel 5 vs. Pixel 6: Worth the upgrade?

From a sheer benchmark perspective, the Pixel 6 obliterates the Pixel 5. Even so, there are some internal and external similarities that you might be surprised by.

So to summarize, the Pixel 5 and non-Pro versions of the Pixel 6 share some DNA but with some notable improvements in a few areas. It’s hard to compare without noting the huge increase in size. If you like the smaller profile of the Pixel 5, then you might not like the new models.

With a 6.4-inch screen, the Pixel 6 is by no means a “small” phone. It’s actually one of the largest in the history of the Made by Google smartphones series. This is exacerbated as it’s the smallest in the late-2021 lineup. The Pixel 5 is only available in a solitary 6-inch screen size option and is substantially smaller than the Pixel 6. If you prefer a small phone, then you might be disappointed.

However, on paper, there are some notable benefits to the new model. You get Google’s brand new Tensor chip, which is a major step up over the Pixel 5’s Qualcomm Snapdragon 765G. On paper, it benchmarks in or around the same level as the Qualcomm Snapdragon 870 – itself an overclocked Snapdragon 865.

The RAM capacities remain the same at 8GB but the speed and performance favor the slick UFS 3.1 storage found in the Google Pixel 6. In terms of performance, there is a noticeable boost on the newer handset. You’ll see the biggest benefit here with app loading times and in things like file transfers and it is apparent when using the phone side-by-side.

Tensor has other benefits in areas such as image processing and even gaming performance levels. You may notice higher framerates but the 90Hz displays on the Pixel 5 and Pixel 6 are very similar, despite the obvious size and shape differences. The Pixel 6 has a slight edge, courtesy of a higher maximum brightness, but the uniform bezels of the 2020 device are more visually appealing. Luckily both screens are flat, which is beneficial for usability.

Design is a bit more subjective and the Pixel 5 and 6 don’t even look like they are from the same lineage. The Pixel 5 is modest and premium in its own way. It’s light, clean, and the bio-resin finish is very different to many other smartphones or the same era.

With the 2021 device, it’s a return to glass and metal but with hints of the classic Nexus 6P, Pixel 2, and Pixel 4. Matte side rails meet a glossy two-tone finish with a black camera bar. The Pixel 6 is a much heavier and bulkier smartphone than the Pixel 5 as a result. This means that one-handed usability is hindered but Android 12 can offer that through an added feature.

The late-2021 Google Pixel device also has vastly superior speakers and on-device haptics. Firstly, the audio is poor on the Pixel 5 because of the under-display speaker. This affects call quality and although not terrible, isn’t as good as the earpiece and downward-firing tweeter on the Pixel 6.

Haptics took a slight dip on the 2020 model but the Pixel 6 is a return to form with some of the best vibration-based feedback on an Android phone to date. Rounding off the devices, it’s important to note that both come with IP68 water and dust resistance ratings.

As with any Pixel, it’s wrong to say the software is “exactly” the same on the Pixel 5 as it is on the Pixel 6, as although similar that is not strictly true. The core OS is the same, yes, but the Pixel 6 has a few neat tricks up its sleeve that, at present, are not available to older Pixel hardware — although may come in future Pixel Feature Drops and OS upgrades.

Although running effectively the most recent version of Android, it’s also worth noting that because the Pixel 5 series shipped with Android 11 pre-installed and it has received one full OS upgrade, it is only eligible for upgrades up to and including Android 14. Conversely, the Pixel 6 will be updated until at least Android 15, at which point support for the Pixel 5 will have already ended.

It’s not immediately apparent whether some of the exclusive Pixel 6 software features will be backported to older Pixels – including the Pixel 5. Some of the added camera features and functions are said to rely on the improved Tensor chip for processing and tuning. That said, it might be possible with a future Pixel Feature Drop.

Android 12 has a few bugs, which could be addressed with the upcoming Android 12L release. However, the Pixel 6 has a substantial edge over the Pixel 5 in performance even if the software is almost identical. Many of the new features on the Pixel 6 are found within the camera and associated editing apps rather than the “core” software.

Although the Pixel 6 has a battery that is nearly 20% larger than the Pixel 5, the battery life gains are a little more nuanced. The new Tensor chip is based upon a 5nm fabrication process, which is a marginal improvement over the 7nm Qualcomm Snapdragon 765G found at the heart of the Pixel 5 with some associated power consumption gains.

On paper, the battery life should be far better in the Pixel 6. Some reports online show wild variations in lifespan but in almost all cases, the Pixel 6 is an all-day phone in a similar manner to the Pixel 5. Where the newer model really excels is in the charge speeds on offer.

The Pixel 6 and the 6 Pro now include the fastest charging of any Made by Google phone to date. Wired speeds now top out at 30W, while the wireless charging speeds are similarly boosted to 21W but only with the dedicated Pixel Stand 2 – which as of November 1, is not yet available to purchase. Elsewhere, the Pixel 5 stacks up fairly well even despite the smaller battery. The charging speeds are lower but it is mitigated by the decreased internal cell size. Reverse wireless charging is still capped at 5W across the board.

The Pixel 6 series signifies the biggest leap in the camera setup and in conjunction with the return of the Pixel Neural Core, things take a substantial forward step over the previous generations. At the very heart of the new devices is the Samsung GN1 sensor. This 50-megapixel camera sensor means sharper photos but with added depth and improved natural bokeh effects.

While the sensors are improved and the camera layout looks different, the Pixel 5 and Pixel 6 both include a main wide and ultra-wide setup. If you want improved zoom capabilities, then you will have to look toward the Pixel 6 Pro. That said, with both devices 7x digital zoom is available but with a larger sensor, the Pixel 6 ousts the Pixel 5 quite substantially.

The ultra-wide-angle camera takes a slight bump down from 16 megapixels to 12 megapixels on the Pixel 6. However, the new lens and sensor combination has a slightly wider 114-degree field of view and although lower resolution produces fairly similar end results.

Because the Pixel Neural Core is included as part of the Tensor chip, processing times are far faster on the Pixel 6 than they are on the Pixel 5. There are some other benefits to this as the new features process almost instantly with real-time HDR effects when recording 4K video also available on the Pixel 6.

Video feels like it’s an area that is neglected slightly in favor of the photo features. However, it’s worth noting that the overall video capabilities and qualities are improved across the board on the Pixel 6.

Pixel 5 vs Pixel 6: Should you upgrade?

If you are happy with the Pixel 5, then you should not upgrade to the Pixel 6. However, there are some substantial benefits in the camera, battery, and huge performance leaps. In some areas, the Pixel 5 is the better option for some people, especially if you like a smaller device or dislike the idea of an in-display fingerprint scanner. It’s important to note that upgrading every single year is not cost-effective, nor is it good for the planet. The Pixel 5 is still a great smartphone that has improved substantially since its release thanks to software enhancements and Pixel Feature Drops.

With that said, the Pixel 6 is a substantial step up over its 2020 counterpart in almost all areas and all without a price hike. For just $599 the package on offer will not disappoint. It provides everything a so-called flagship should provide with a chipset that does not feel like a compromise as the Qualcomm Snapdragon 765G did in the Pixel 5.

Those of you with an older Pixel may also want to upgrade as you will see the biggest improvements and performance gains. This fits more in line with the two-year upgrade cycle that we’d usually suggest people stick to for the most gains — although the longer you can hold out, the better!

Where can I get the best deal on the Pixel 6?

Are you insistent on getting the Pixel 6? If so, the Pixel 6 is actually proving hard to get right now. Ahead of Black Friday, the Pixel 6 retails for $599 in the US and can be purchased directly from Google, Amazon, Best Buy, Verizon, B&HPhoto, Target, AT&T, plus many more.

Alternatively, if you would prefer the Google Pixel 5, unfortunately it is now discontinued, but the Pixel 5a with 5G offers almost all of the same benefits for $449 at Amazon, the Google Store, and many more.