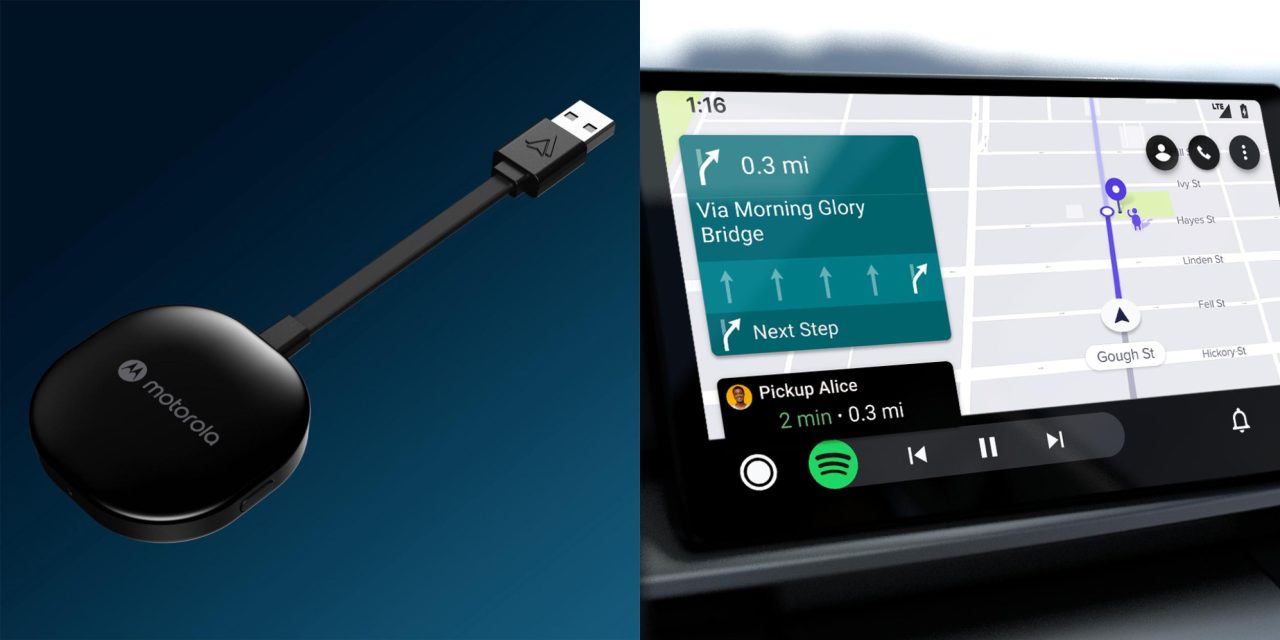 Last year saw the emergence of dongles that let you use Google’s phone-powered car UI for navigation, messaging, and entertainment wirelessly even if your vehicle doesn’t support that natively. Motorola is now making a wireless Android Auto adapter.

Update 1/13: The Motorola MA1 is now available to pre-order from Amazon. For $89.95, you get the dongle and a gel pad for “securing the adapter in car.” It’s sold by the aforementioned “Motorola Voice” but will ship from Amazon on its January 28 release date.

Original 1/5: In the coming weeks, Motorola is releasing its MA1 wireless adapter so that you don’t have to connect your Android phone via a USB cable to launch Android Auto on your car’s infotainment system. This dongle is roughly analogous to a Chromecast in terms of both functionality and design.

The Motorola MA1 consists of a black puck that has the batwing logo and wordmark on top. A USB-A cable, which features the Android Auto logo, connects it to where you’d normally plug in your phone.

Connected via USB, the adapter stays in your car and wirelessly projects Android Auto from your phone to your car display as soon as you step inside.

The Lenovo-owned company is, curiously, selling the MA1 as part of its Motorola Sound brand of earbuds, in-ear headphones, over-ear headbands, and wireless speaker(s). The Motorola adapter costs $89.95 and will be available starting January 28. It’s priced similarly to its competitors.

Meanwhile, Google today announced that Android Auto is getting Lyft and Kakao Mobility (of South Korea) apps this summer to let drivers “view and accept rides right from their car display.” The experience will be combined with those service’s custom mapping experiences. Cards on the left side of the screen will note ETAs, while there are also shortcuts, including for calling, in the top right.

And with access to points of interest apps like MochiMochi, Fuelio and Pezzi Bezzina, you can explore more of the world, find and pay for all types of car services, and track your mileage and costs.

Other Google announcements from CES 2022 include: