Poco F4 vs. Pixel 6: Bang for your buck battle [Video] 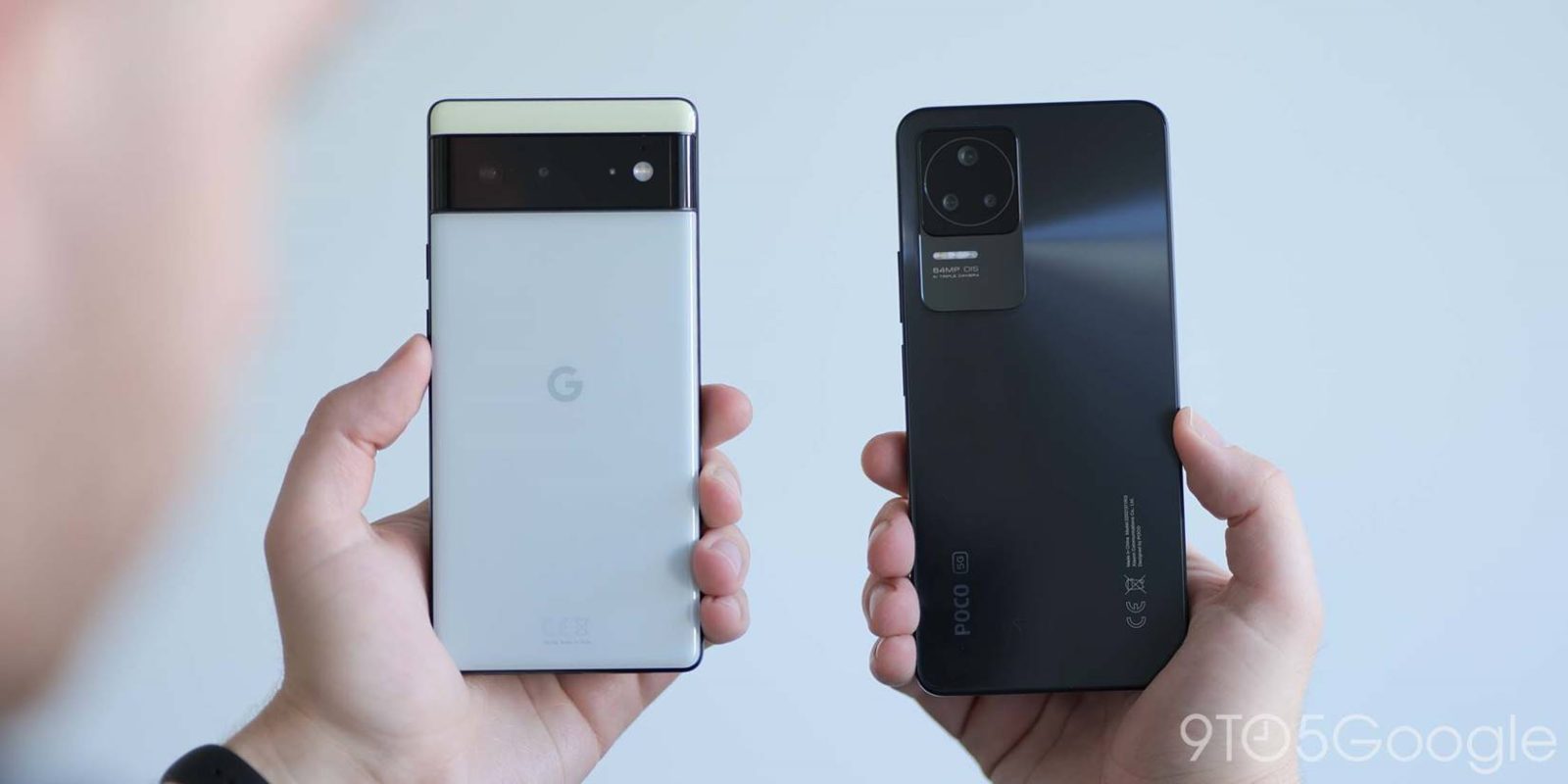 Does the Poco F4 offer a better package than the baseline Pixel 6 — a device we hailed as one of the best “default” Android phones you can buy? Let’s find out.

Sadly, not all markets get all devices, but if you are lucky enough to live in a region where budget smartphones are plentiful, then you may be interested in the latest Pocophone. Given that performance levels and the overall package are fairly similar to the Pixel 6, we’ve compared it directly to help you devise which is the better buy and determine which offers the best “bang for your buck.”

On paper, there certainly is a heavy case for the Poco F4 over the Pixel 6. From the display to the internals, you could be forgiven for wondering just why Google is asking for a substantial premium over Xiaomi’s budget flagship.

The Poco F4 certainly utilizes its chassis better courtesy of a larger display and smaller bezels. That’s not all as it has an excellent 120Hz FHD+ AMOLED screen with a minuscule punch-hole, HDR10+ support, and great 900-nit maximum brightness (1,300-nit peak brightness).

Google opted for larger bezels, which results in a form factor that is close to that of the Poco F4 even despite having a substantially smaller screen. The 6.4-inch FHD+ AMOLED has a 90Hz maximum refresh rate and lower 800-nit maximum brightness (1,100-nit peak brightness), which puts the Pixel 6 at an immediate disadvantage.

The quality difference is not as pronounced as you might expect as Android is tuned specifically on the Pixel to take advantage of high refresh rates. That said, there is a certain “speed” bump when shifting between apps or scrolling when using the Poco F4. Software tuning certainly helps elevate what is a good 90Hz AMOLED screen on the Pixel 6 above many average 120Hz panels though.

It’s easy to tell which device is being positioned as a “premium” option when in the hand. There’s a reassuring heft to the Pixel 6 that you simply do not get from the Poco F4. The design of the Pixel 6 is striking and unique while the Pocophone is basically a rebranded Redmi K40S with fewer color options to boot.

The biggest gulf between the Pixel 6 and the Poco F4 certainly exists in the software stakes. This is where all of the perceived hardware benefits on Xiaomi’s latest budget phone fall far short of Google’s support system and software update cadence.

If you value functions and features, MIUI 13 is stuffed with little extras to take advantage of the impressive internals. A prime example is that of virtual RAM expansion. This feature utilizes a portion of your device storage to emulate RAM. Because UFS 3.1 storage is fast, you can keep more apps in the background and load them quickly when reopening. Other neat features include the Sidebar floating toolbox, which lets you remove clutter from your screen with a scrollable list that can be stashed at any time.

Customization from top to bottom is where the Pixel 6 lacks as the more automated Material You theming system tunes almost all facets of your smartphone based upon the wallpaper you have applied. The end result certainly feels more cohesive but very simplistic compared to what is possible on the Poco F4 and the in-depth MIUI theming controls.

You do gain a lot of benefits courtesy of the Pixel 6’s Tensor processor including on-device live translation, which is not possible on the Poco F4 even despite a similarly powerful CPU. That expands to other modes such as Magic Eraser for quick object and person removal in photos.

The Qualcomm Snapdragon 870 and the Google Tensor chipsets compare quite well, but Google’s processor has a very slight edge in things such as gaming. This is hard to spot in the real world but might be more noticeable as time progresses.

Another thing to consider is the update schedule. Google will provide three full Android updates for the Pixel 6. Xiaomi has been a little cagey, and although it could get a similar number of OS versions, it has yet to be officially confirmed. Both devices have shipped with Android 12, but with the Pixel, you’ll get updated up to and including Android 15 — then a further two years of monthly security patches on top. Given that Xiaomi has not officially confirmed the overall update length, we’d wager that Android 13 will be at least guaranteed, but after that, it’s guesswork.

Another area in which the Pixel bests the Poco F4 is in the battery capacity stakes despite a fairly small increase in size. There’s also the usage of a less power-hungry 90Hz display versus a 120Hz panel in the Poco F4. In reality, both phones can last a day with few issues and might even push the two-day barrier if you are less tied to your device screen.

The Poco F4 has vastly superior wired charging speeds, but that is tempered by a lack of wireless options. However, the 67W charge brick is supplied in the retail box. Google advertised 30W wired charging with an optional accessory, but it’s worth noting that 21W is the maximum with the optional charger or second-generation Pixel Stand.

In terms of camera options out of the box, the Poco F4 truly wipes the floor with the Pixel 6. That said, the Pocophone offers vastly inferior quality images and video than the Pixel can churn out. Sure, Xiaomi latest has a bigger sensor than its predecessor, the 50-megapixel Samsung ISOCELL GN1 sensor on the Pixel 6 is larger and tuned to a greater extent.

Once you move beyond the 64-megapixel main sensor, the Poco F4 camera quality starts to dip quite substantially. For that reason, if you value photo and video alongside performance, then the Pixel 6 remains a better choice for those wanting great point-and-shoot results that rival the best smartphone camera systems.

It is important to note that the Poco F4 does provide a substantial suite of video modes but the Pixel 6 is no slouch here either. You can capture 4K UHD 60fps video on both handsets with only the modes available such as Dual video or Cinematic Pan differentiating in the options at your fingertips.

Objectively speaking, the Pixel 6 comes out on top with video quality here too. Google’s post-processing and combination of OIS and EIS are far superior to what you’ll find on the Pocophone. For that reason, no matter your camera aims, the Pixel is the best option.

Poco F4 vs. Pixel 6: Which is the best bang for your buck Android device?

Given there is something of a price disparity between the Pixel 6 and the Poco F4, it’s hard to deny that Xiaomi’s latest “budget flagship” certainly packs a punch. If you want an affordable but powerful Android phone, it’s a good option.

When you consider that the Pixel 6 will likely have a longer lifespan, vastly superior camera, cleaner software, and more, then it shoehorns itself into the conversation whenever such budget phones are discussed or released. If you value longevity, then it’s a no contest. If you prefer power and performance per dollar, the Poco F4 is a great package, and one that certainly makes sense for those on a limited budget.