Review: Nest Wifi Pro is built for the work-from-home era 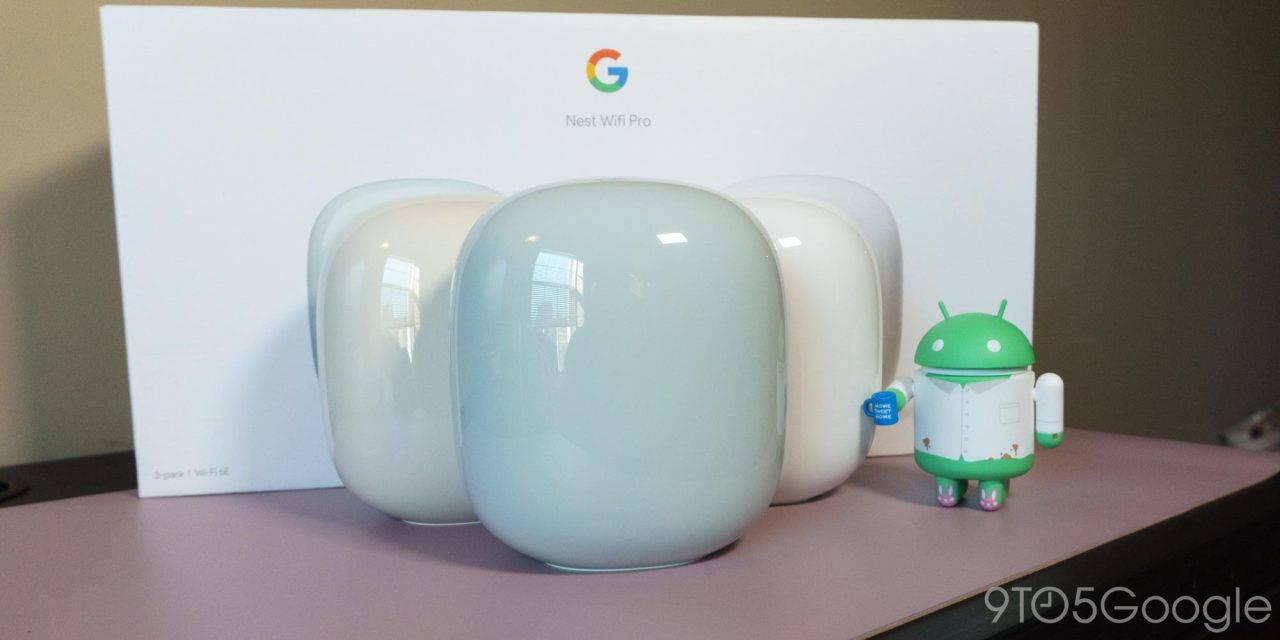 Nest Wifi Pro is designed to be the perfect investment for upgrading your office in the work-from-home era, but are the benefits of Wi-Fi 6E worth the increased cost?

As ever, the Nest Wifi Pro is designed to be as simple as possible to install in your home. Inside the box, you’ll find the wildly shiny router held safely in place by a fabric pad, so as to avoid scratches, along with a power cable and an Ethernet cable. One thing I was disappointed by is that Google still only includes one Ethernet cable in the $399 three-pack box.

If this is your first time investing in a Nest Wifi for your home, the process is all too easy, with the Google Home app walking you through each step. Setting up the main router and an extender took just over 10 minutes in total, including the time taken to download and install the latest update. Where possible, Google Home now shows an in-app timer, giving you an idea of how long certain steps will take.

Things took a bit longer for me, though, as I already had Nest Wifi and Google Wifi routers on my network. I foolishly thought I could just unplug those and plug in the new Nest Wifi Pros in their place. However, Google Home requires you to factory reset those older devices before you can continue with the new setup.

Between unplugging the old devices, starting the setup, plugging them all back in, resetting them, and unplugging them again, I ended up more than doubling my install time. If you just follow the Google Home app’s instructions, unlike me, you’ll still get through this pretty quickly.

One area of setup that I wish Google would improve is the way it gives feedback on the placement of each Nest Wifi Pro. The only guidelines the app gives are to not put each subsequent router further than two rooms away and a warning that appears if they’re too far apart.

I know that my home needs at least two units, because of its odd, hallway-like shape, but I wonder if I can get away with just two instead of three. The only real way to find out is through experimentation, moving Nest Wifi Pros around, and using “Test Mesh” in the Google Home app. Some feedback along the lines of “you could get more overall coverage if you moved a little further away” could be quite useful.

A note on style

For the Nest Wifi Pro, Google has continued to pursue its vision of tech that blends into your home’s decor. To that end, the router has a shiny, soft-colored exterior that gives it the appearance of ceramic art. Some may prefer the flat, eggshell-like qualities of the 2019 Nest Wifi before it, but I find the new model to be surprisingly charming while still managing to blend into the background.

On the plus side, it seems to me that the shiny exterior of the Nest Wifi Pro will be easier to clean than previous devices — speaking from experience of scrubbing down an older Nest Wifi. The flip side, though, is that flecks of dust are much more visible on the new model, meaning you may need to clean it a bit more often.

You can get the router in four different colors: Snow (white), Linen (cream/tan), Fog (light mint green), and Lemongrass (yellow-green). While fun, the only way to get multiples of a color other than Snow is to buy them individually, sacrificing the discount of the bundles. The multicolor three-pack we reviewed includes one each of Snow, Linen, and Fog, giving each room its own color vibe.

The core benefit of the Nest Wifi Pro over past models is the introduction of Wi-Fi 6E, which is essentially two generations newer than the previous Nest Wifi. Under ideal conditions, the Wi-Fi 6E connection in the Nest Wifi Pro should be able to handle up to 5.4 gigabits per second across your home’s devices.

This is significantly faster than even the best internet connections available today, but is solid for futureproofing your home network. This extra speed is mostly useful for working with devices within your home, such as hosting a Plex server or streaming a security camera.

It’s important to note, however, that your actual internet connection speed can’t exceed 1Gbps. This is due to a limitation of the Ethernet ports on the Nest Wifi Pro. Considering many internet providers do not yet offer multi-gigabit service, this won’t be a problem for most, but it’s something to be aware of looking ahead. As the technology for Ethernet speeds as high as 10Gbps exists today, it’s a bit disappointing to see Google opt for cheaper ports here.

Beyond that potential for raw speed, the biggest change with the Nest Wifi Pro’s jump to Wi-Fi 6E is the introduction of the 6GHz band of wireless. While there are already a decent amount of modern devices that can connect over the 6GHz band, it’s significantly less crowded than the other two bands of Wi-Fi.

If you only have a single Nest Wifi Pro, this likely won’t matter much, but when you have two or more, things get interesting. The reason Nest Wifi Pro is incompatible with previous generation devices is that it exclusively uses 6GHz to connect the mesh routers, meaning your network shouldn’t have as much interference from your neighbors.

With the work-from-home era still going strong, many have invested in better, stronger Wi-Fi in recent years. If you live in a crowded area — such as an apartment complex — there’s a decent chance your neighbors’ Wi-Fi could be affecting yours. By connecting together on that less crowded 6GHz band, the Nest Wifi Pro system is able to offer better stability for the whole network.

In practice, I’ve found my home network to be significantly more stable and speedy since switching out my older Nest Wifi setup for the Nest Wifi Pro. For example, my wife and I were easily able to simultaneously play through two different cloud streaming services with almost no disruptions.

The Wi-Fi 6E connection in the Nest Wifi Pro should also benefit some of your individual devices too. Newer devices with 6GHz connectivity will see fantastic speeds, though they’ll need to be quite close to one of the Nest Wifi Pros to see that impact as 6GHz doesn’t travel quite as far as 5GHz or 2.4GHz.

For example, while sitting in the room between my two routers, my Pixel 7 Pro opts to use the 5GHz signal instead. This could also simply be a matter of the phone not “roaming” to the closer router quickly enough, though.

Optimized for family and the home office

With companies continuing to offer remote work opportunities, it’s almost vital to maintain a steady internet connection throughout your home so that work can be done anywhere. Like any other mesh Wi-Fi system on the market, having multiple Nest Wifi Pro units will ensure your phone, laptop, and more all have a strong, reliable signal.

Where Google’s system sets itself apart — aside from the pure simplicity of it all — is in the ways you can optimize your network for getting work done. In the Google Home app, you’ll find a variety of controls for your network, including a toggle that gives priority to video conferencing apps like Google Meet, Microsoft Teams, and more (as well as a toggle for cloud gaming).

Similarly, you can pick a device to be given “priority” for a limited time, which makes sure that its traffic isn’t slowed down by other devices on your network. This can be especially useful when working from home while the family is also home with you.

Additionally, Nest Wifi Pro (and the whole Google/Nest Wifi ecosystem) has a suite of dedicated “Family Wi-Fi” controls. With it, you can group together any devices used by children in your home, and from there, Google Home allows you to easily block adult websites (as determined by Google SafeSearch) on those devices or even entirely disable internet access at specified times.

Similarly, when you have company over, it’s easy to boot up a guest network for friends and family to use — keeping your personal devices separate and secure. You can even show the connection information for the guest network on a Nest Hub.

Just like the 2019 edition of Nest Wifi, the Nest Wifi Pro is a fantastic experience right out of the box. Google has done a fantastic job of making a good first impression, there’s no doubting that.

When done right, Wi-Fi routers are supposed to be the kind of tech that you set up and almost never think about again — give or take family device management or guest networks. As such, one would want a premium router like the Nest Wifi Pro to be guaranteed to last for years to come.

However, between our own experiences with Google Wifi and Nest Wifi devices over the years and numerous reports online, we haven’t found that to be consistently true for everyone. Some devices fare well over the years, while others become finicky and need to be restarted frequently. Considering having stable internet access is more important than ever in the work-from-home era, longevity and reliability are crucial to a Wi-Fi router’s design.

So far, Google hasn’t given any indication that the hardware in Nest Wifi Pro has significantly better longevity than past generations, and the past 10 days also haven’t been nearly long enough for any issues to develop. Nest Wifi Pro brings some fantastic improvements across the board, yet I can’t wholeheartedly recommend it until I’ve seen firsthand whether it’s built to last.

Is the Nest Wifi Pro worth buying?

With a retail price of $199.99 for just one router, the Nest Wifi Pro is surprisingly one of the most affordable Wi-Fi 6E devices on the market today. With just one unit, assuming you’re upgrading from an older network setup, you’d see some benefit with the Wi-Fi 6/6E upgrades, but nothing worth writing home about.

The real value of Nest Wifi Pro comes from the bundles of two or three, putting a strong signal wherever you may need it in your home with the help of Wi-Fi 6E. The bundles are also exceptionally priced, only adding $100 for each additional unit — $299.99 for two, $399.99 for three.

There’s a strong case to be made for the Nest Wifi Pro as a wise investment into the future for anyone working from their home office, bringing top-of-the-line connectivity for a reasonable price. However, Google’s current track record for the longevity of Nest Wifi hardware makes it a bit harder to simply outright recommend at this time.

Where to buy Nest Wifi Pro: