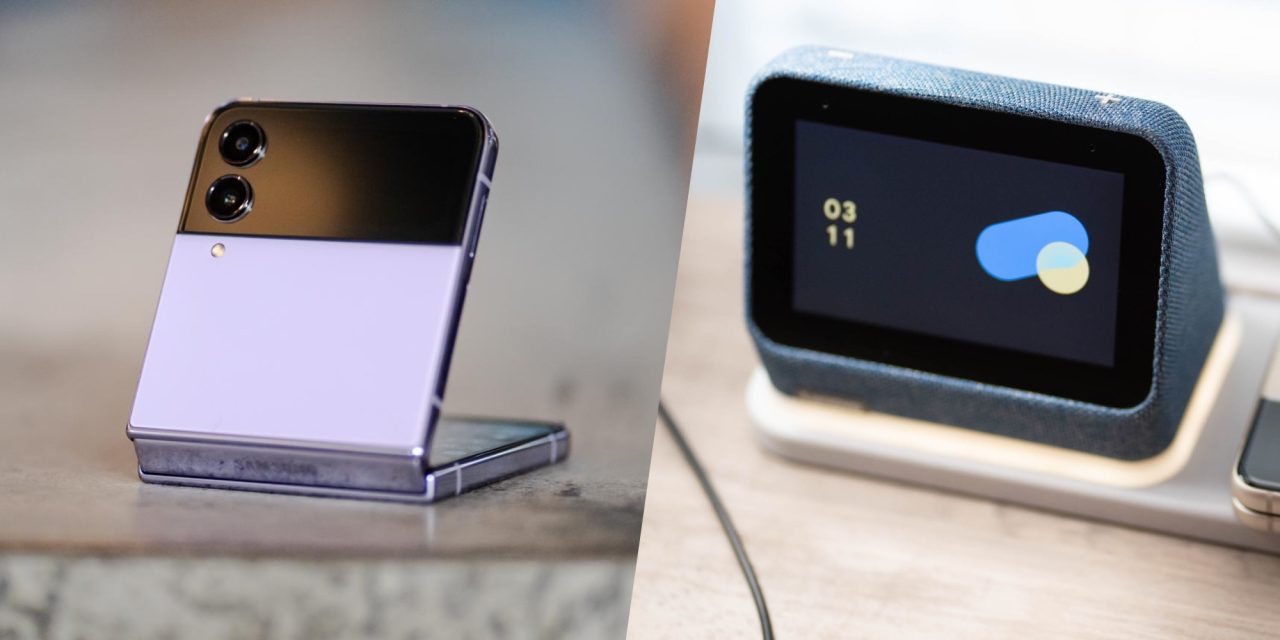 All of today’s best deals are now live and headlined by a more affordable way to get in the foldable game with the Samsung Galaxy Z Flip 4 at $199 off. That’s alongside 50% discounts on Lenovo’s Assistant-powered Smart Clock 2 from $35 to go complement the ongoing Jabra Elite 5 earbuds sale that delivers ANC and Google Fast Pair for $120. Hit the jump for all that and more in the latest 9to5Toys Lunch Break.

Amazon is now offering the unlocked Samsung Galaxy Z Flip 4 5G 128GB Android Smartphone for $801. Normally fetching $1,000, today’s offer amounts to $199 in savings while delivering the second-best discount to date. Within $1.50 of the low, we’ve only seen it sell for less one time back during the fall Prime Day festivities. Today’s discount lets you nearly get in on the same savings for those who missed the Prime-exclusive offer. The elevated 256GB model is also on sale and sitting at $851, down from the usual $1,060 price tag.

Samsung’s new Galaxy Z Flip 4 takes on a more casual approach to folding devices with a design that’s inspired by old school flip phones. Housed within the flip design is a 6.7-inch Dynamic AMOLED 120Hz display that comes powered by the new Snapdragon 8+ Gen 1 chip. On the outside is the 1.9-inch Super AMOLED display for checking notifications, which also doubles as preview for taking selfies with either of the dual 12 MP cameras. Its internal 3,700mAh battery is larger than its predecessor and rounds out the package that you can read all about over at 9to5Google.

Best Buy is now offering an early Black Friday discount on the the Lenovo Smart Clock 2 with Wireless Charging Dock, which now drops down to its lowest price ever. Currently sitting at $45, you’re looking at 50% in savings from the usual $90 going rate. For comparison, our previous mentions have been tracking a $60 sale price, with today’s offer taking an extra $15 off to deliver on that best price yet status. This is the advertised Black Friday pricing, as well. Lenovo’s latest second-generation Smart Clock just hit the scene in the latter half of last year and arrives powered by Google Assistant. Alongside living up to its name by doubling as an alarm clock, there’s the usual feature set you’d expect from Assistant like smart home device control and more. Plus, you’ll find the bundled charging dock that delivers a 10W Qi pad and 2.4A USB-A port for a streamlined nightstand setup. Dive into our hands-on review for all of the details.

Entering at a more affordable price point with the same savings as noted above, the standard Lenovo Smart Clock 2 ditches the integrated charging dock found on the lead deal. Forgoing that inclusion also lets you pocket $10 in savings from the usual going rate, with today’s offer delivering a $34.99 sale price. This delivers much of the same Assistant-enabled nightstand upgrades, sans the integrated charging features. But if your bedside table is already laid out with ways to power your devices, the added $10 in savings will surely be worth taking advantage of. It’s down from the usual $70 price tag and like the lead deal, also matching the expected Black Friday price tag.

Amazon is now offering the recently-released Jabra Elite 5 True Wireless Earbuds for $120. Normally fetching $150, you’re looking at only the second discount to date since first hitting the scene back in September, with $30 in savings marking a return to the all-time low. Jabra’s latest addition to its stable of true wireless earbuds arrive in the form of the new Elite 5 buds.

These offerings pack hybird active noise cancellation out of the box that comes backed by six built-in microphones for tuning out distracting ambient audio. The actual listening experience comes powered by 6mm drivers, with support for aptX audio. Google Fast Pair then supplements the Bluetooth connectivity and rounds out the package with seven hours of playback from the earbuds themselves and another 28 hours from the charging case. Our launch coverage offers some additional insight, too.

Amazon now offers the Wyze Cam Pan v2 for $30. Normally fetching $50, you’re looking at a 40% discount that delivers one of the first chances to save since launching last year, as well as a new all-time low that’s $10 under our previous mention.

Improving on the original model, the new Wyze Cam Pan v2 now has color night vision support to supplement all of the other security chops. There’s a 1080p sensor for capturing the happenings of your home, which rests upon the motorized base that enables 360-degree pan, tilt, and zoom features for comprehensive surveillance. You’ll also be able to pair all of those features with Alexa and Google Assistant to round out the package. Our hands-on review details everything you can expect, as well.

Amazon is now offering the Fitbit Luxe Fitness and Wellness Tracker for $80. Down from the usual $130 price tag you would more regularly pay, today’s offer amounts to a new all-time low of $50 off. This is $7 below our previous mention from earlier in the fall, as well, which was the previous best price.

While not either of the new flagship fitness trackers that have recently hit the scene, Fitbit Luxe arrives as one of the brand’s more affordable offerings which still manages to pack a more premium design centered around an AMOLED display. Its 5-day battery life pairs with the ability to track a variety of stats ranging from exercise and heart rate to SpO2 and more. While not quite as capable on the smartwatch feature set as some of the other options in the Fitbit stable, it’ll certainly help offer extra insight on workouts and overall wellbeing. Get a closer look in our launch coverage