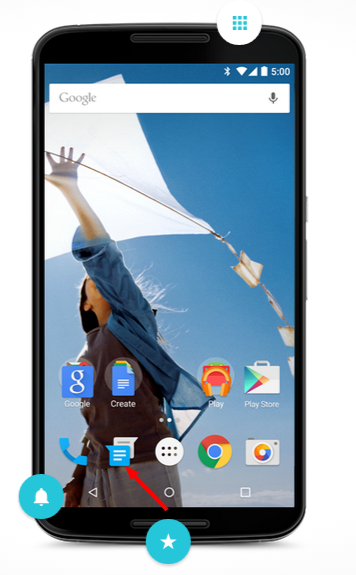 Google announced a plethora of goodies today and while we’ve been seeing several shots the company’s latest hardware, we keep noticing unfamiliar software icons hanging out on Mountain View’s new devices. Pictured above is a shot of Google’s new Messenger app that will be shipping with the Nexus 6 as part of Android 5.0 Lollipop.

No, Messenger isn’t Hangouts’ replacement, instead it’s more of a simplified app that can be used to send SMS and MMS messages. In an effort to clear up some of the confusion, Google released a statement explaining this new software’s role in Android.

Messenger and Hangouts offer users choice, each have their own benefits. Hangouts work great for cross platform (web, iOS, Android) and cross medium communications (video, voice,messaging, SMS). Messenger will be specially designed to be a quick and easy way to send and receive SMS and MMS messages on Android; more to come (Nexus 6 will come with both apps).

So it appears that Messenger is intended to be barebones quick message app for Android’s casual audience, while Hangouts will be available to users looking for a more robust experience. It’s possible that Messenger could also be Google’s new chat app that we heard about a couple of weeks back, but it’s now clear that Android users will have a couple of pre-installed messaging options when Android 5.0 arrives.