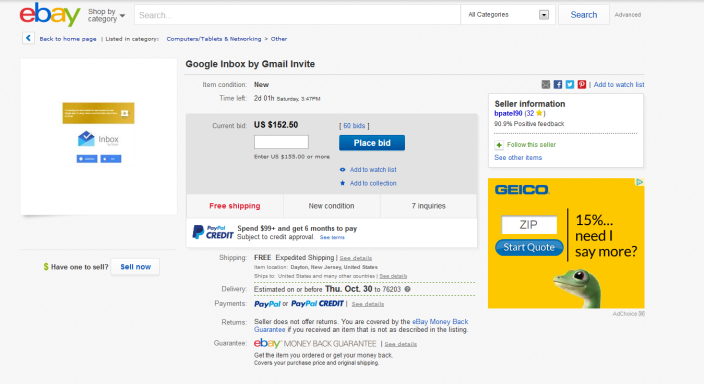 This is plain crazy. An invite for Google’s reinvented email application, Inbox, is now going for more than $150 on eBay. We all saw it coming, but I don’t think anyone expected the internet to be this desperate to get access to the app a few weeks—or maybe even days—early. This is somewhat in line with what we’ve seen in the past, though, with some of the best examples being other services that Google slowly rolled out—namely Google+ and the original Gmail.

Currently, only Google employees have the ability to invite new users to the service, and invites are most definitely not transferable. So it appears that either a Google employee is trying to make a quick buck (unlikely), or someone is just very confident in their ability to get one of these said employees to shoot one off to the winner. Google does say that normal users who already have access to the service will soon be able to invite others, and that will probably effectively kill the Inbox invite black market.

If you want to join ranks among the typical citizens patiently waiting on an invite, send an email to inbox@google.com.