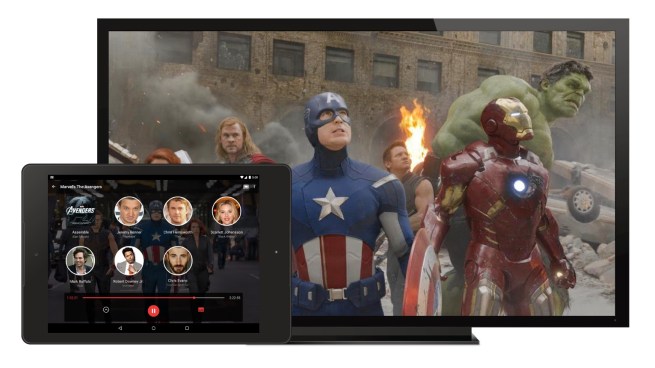 Google today announced that it’s rolling out an updated Google Play Movies & TV app for Android that introduces a second-screen experience when streaming TV shows and movies to a Chromecast or Nexus Player-connected TV. That means that your Android smartphone or tablet will now display actor or soundtrack information related to the content streaming to the big screen.

Next time you’re burning to know where you’ve seen that actress before, or want to remember a song for later, you don’t have to hit pause or fumble with your controller. It’s at your fingertips – just like your popcorn.

Google notes that you’ll have to “look for the Info Cards badge on the Google Play store to find movies and TV shows that offer this feature.”

Also included in the updated app is a redesigned experience that incorporates Google’s material design principles and other tweaks:

Google Play Movies also has a new look and feel inspired by Google’s material design with bigger images and smoother transitions. And the redesigned “Watch Now” tab makes the experience of finding a movie as pleasant as watching the movie itself. Now you’ll see more movie recommendations in Watch Now, and you’ll be able to watch a trailer directly in the app.

Google says the updated Google Play Movies & TV Android app is rolling out over the next week to all.