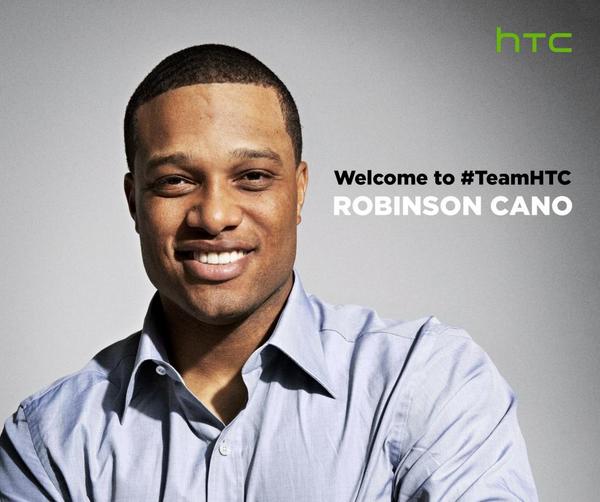 Last summer, HTC signed a $12 million deal to bring Iron Man star Robert Downey Jr. on board as a brand ambassador, and today, the company announced its latest celebrity spokesperson. In a press release, HTC revealed today that it has signed Seattle Mariners 2nd baseman Robinson Cano to a multi-year brand ambassador agreement.

The former New York Yankee was just recently traded to the Seattle Mariners, ending his 8 year tenure with the Yankees. HTC America’s headquarters are in Seattle, making this gig a perfect fit for Cano. In the press release, the All-Star 2nd baseman explained why HTC is a great role for him.

“HTC is a natural fit for me because they always want to be the best at what they do,” Cano said. “Their products are great for me because I’m always on the road and I need my phone to work as hard as I do.”

Details on Cano’s HTC deal, including a dollar amount, remain sparse at this point. Downey Jr.’s partnership was for television spots, as well as print and billboard advertisements, but it’s unclear if Cano’s deal is as extensive. You can read the full announcement from HTC below:

SEATTLE, Nov. 10, 2014 /PRNewswire/ — HTC, a global leader in technology innovation and design, has signed a multi-year agreement with six-time MLB All-Star and Seattle Mariners 2nd baseman Robinson Cano. The partnership between HTC and Robinson Cano is born out of a shared dedication to the pursuit of personal excellence.

“HTC is a natural fit for me because they always want to be the best at what they do,” Cano said. “Their products are great for me because I’m always on the road and I need my phone to work as hard as I do.”

Cano’s dedication to sportsmanship and mentorship were defining factors in HTC naming him a North American ambassador for the brand.

“Robbie’s authentic enthusiasm for our products, brand and company values made the decision to work together easy,” said Erin McGee, VP of Marketing for HTC Americas. “HTC is a company driven by passionate employees who believe in teamwork, co-creation and empowering others to pursue their brilliance. Robbie’s leadership on and off the field aligns seamlessly with HTC’s core values and we are excited about his contributions over the next few years.”

In addition to establishing himself as a prominent member of the Seattle community in the past year, Cano continues to build his RC22 Foundation to serve underprivileged youth worldwide. HTC recognizes and supports Cano’s dedication to RC22 Dream School, a planned Montessori school and community education center in Cano’s home country of the Dominican Republic funded by the RC22 Foundation.

Founded in 1997, HTC Corp. (HTC) is the creator of many award-winning mobile devices and industry firsts. By putting people at the center of everything it does, HTC pushes the boundaries of design and technology to create innovative and personal experiences for consumers around the globe. HTC’s portfolio includes smartphones and tablets powered by the HTC Sense® user experience. HTC is listed on the Taiwan Stock Exchange (twse:2498). For more information, please visit www.htc.com.