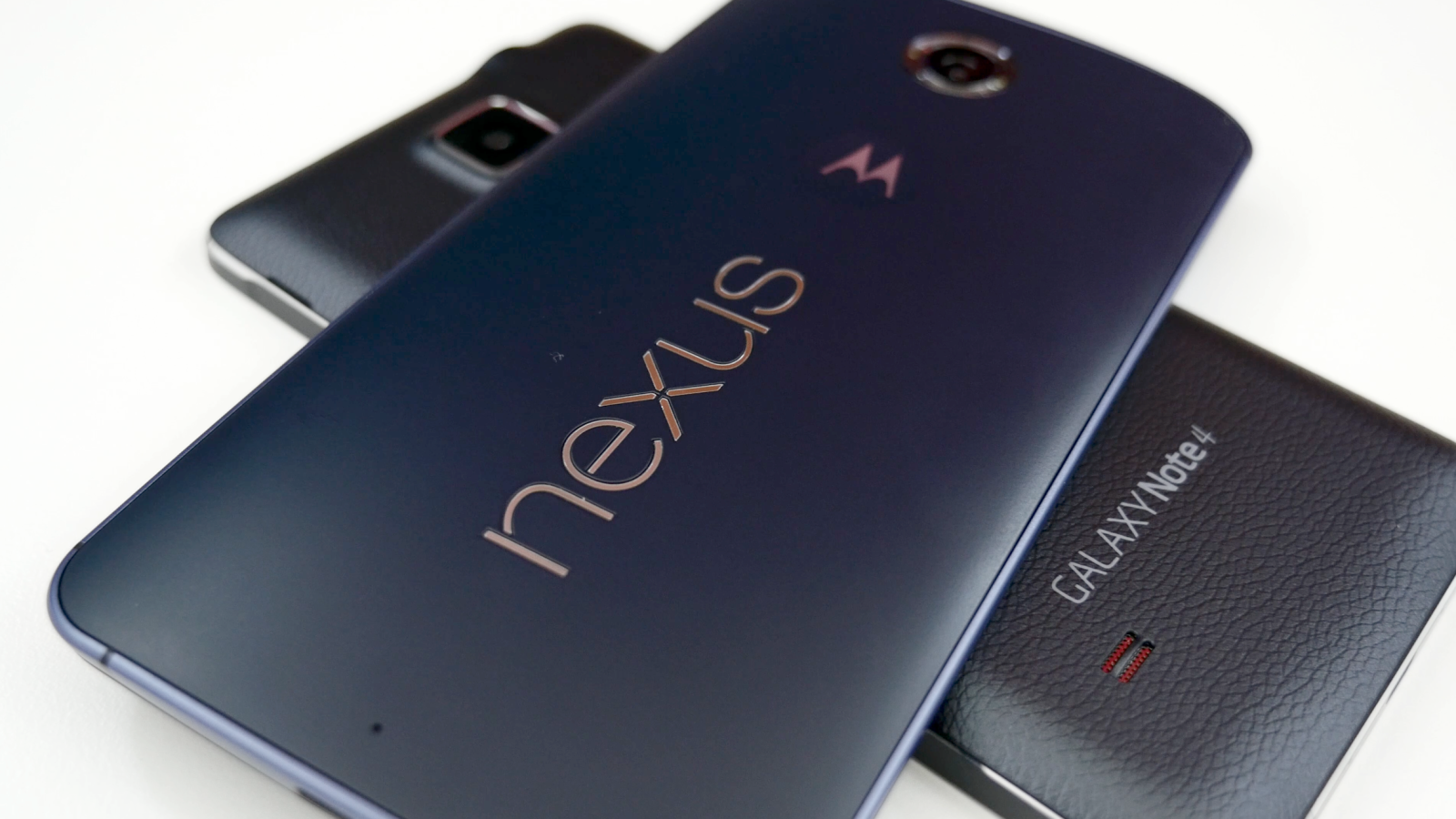 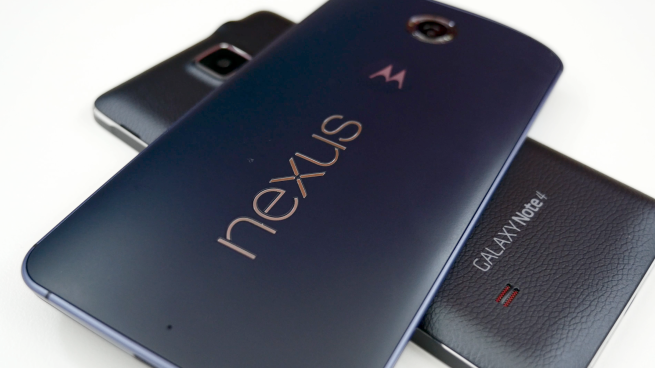 At this point, it’s very clear that Google’s Nexus 6 and Samsung’s Galaxy Note 4 are the two hottest Android phablets on the market. These two monster-sized smartphones are both great in many ways, but what makes them so different? In this article, we’re going to be comparing the Nexus 6 to the Galaxy Note 4. This comparison won’t get too in-depth with every single feature from each device, but it’s nice to know how these two stack up against each other.

We’ll be taking a brief look at features, specifications, design, and camera performance in this comparison and hopefully give you a good idea of what each device has to offer. Also, be sure to check out our full review of the Galaxy Note 4 and Nexus 6 for more details on each device. These two Android smartphones are complete opposites in terms of features and design, but which one is right for you? Let’s go ahead and find out…

First up, let’s take a look at specifications. As you would expect, both of these smartphones are packed with high-end flagship specs. In fact, internally they are exactly the same. Both the Nexus 6 and Galaxy Note 4 feature a quad-core Snapdragon 805 processor, an Adreno 420 GPU, 3GB of RAM, and a 3,220 mAh battery. That’s right, identical internals.

The only technical difference between the two is going to be the display size. Samsung’s Galaxy Note 4 features a 5.7-inch Super AMOLED display with a resolution of 2,560 x 1,440 (515ppi), while Google’s Nexus 6 has a 5.96-inch AMOLED display of the same resolution which equals out to 493 ppi. While the specifications may be similar, the design and hardware between these two devices will provide a very different experience.

Check out our Nexus 6 vs Galaxy Note 4 comparison video below:

Samsung is known for it’s fake leather textures and chromed-out plastic trim, but this year the Galaxy lineup ended on a different note. The Note 4’s design is one of the best built smartphones we’ve ever seen from Samsung. Its sleek metal frame feels great in the hand and while we still have the fake leather back side, Samsung has ditched the artificial stitching that was found on the Note 3.

With the Nexus 6, its design was inspired by this year’s Moto X and all-around it feels like a solid device. Google’s Nexus 6 also features a metal frame, but has a hard plastic finish on the back. Even though this is technically a recycled design, it still feels like a very fresh device. The may be the same in size, but these two devices are very different.

As far as layout goes on the Nexus 6, you’ll find a 3.5mm headphone jack and Nano SIM card tray on the top, while the bottom makes room for the Micro USB charging port and a small microphone. The front side features a 2-megapixel camera, the appropriate sensors, and dual front-facing stereo speakers. On the back we have a 13-megapixel shooter with optical image stabilization that’s capable of capturing up to UHD video quality and a dual-LED flash in a ring diffuser setup. Finally, on the right side we have its volume rocker and a textured lock button.

Moving over to the Galaxy Note 4, on the front side we have the appropriate sensors, a 3.7-megapixel front-facing camera, updated capacitive navigation buttons, and a home button with a built-in fingerprint scanner. On the left side of the Note 4, you’ll find its color-matched volume rocker, while the right side is home to the power button. On the top we have a 3.5mm headphone jack, IR blaster, and a small microphone. At the bottom we have a pair of microphones, Micro USB charging port, and the S Pen. Finally, on the back side you’ll find a 16-megapixel camera with optical image stabilization, LED flash, heart rate sensor, and a small speaker.

Both of these devices feature quick-charging capabilities with their included charging bricks. This will allow you to charge up either device faster than a traditional wall adapter and get more out of your battery throughout the day. It’s a very helpful feature and I’d love to see more manufacturers take advantage of this technology in the future.

It’s a little tricky to judge a software comparison between these two devices, so instead I’ll just lay out the facts. Google’s Nexus 6 is running Android 5.0 Lollipop and is considered a pure or stock version of the mobile operating system. This is going to be very Plain Jane in terms of software features and functionality, but on average it will be a better performer than any Android device running a third-party skin. There are quite a few features that make Lollipop an enjoyable experience for all smartphones, but if you’d like to know some of our favorites check out our Nexus 6 review. At the time of this article, the Galaxy Note 4 is running Android 4.4.4 KitKat with Samsung’s TouchWiz skin on top. As you can see, the user interface design between the Note 4 and Nexus 6 is going to be drastically different. Along with that, Samsung tends to pack in as many features as possible into TouchWiz to provide something for everyone. Unfortunately, TouchWiz has a nasty reputation of impacting a device’s overall performance. The internal specifications are the same as the Nexus 6, but don’t count on it always performing like a Nexus 6. I’m not saying the Note 4 is slow by any means, but I’m sure a few people have an opinion or two about TouchWiz.

With the Samsung Galaxy Note 4, you’re getting a very specific set of features. These features won’t be for everyone, but Samsung’s S Pen will provide an experience like no other smartphone, but only if you’re going to take advantage of what it has to offer. I’ve detailed all of the S Pen features in a Galaxy Note 4 vs Galaxy Note 3 comparison article if you’d like to find out more. The main advantage to having a Galaxy Note is going to be the S Pen. 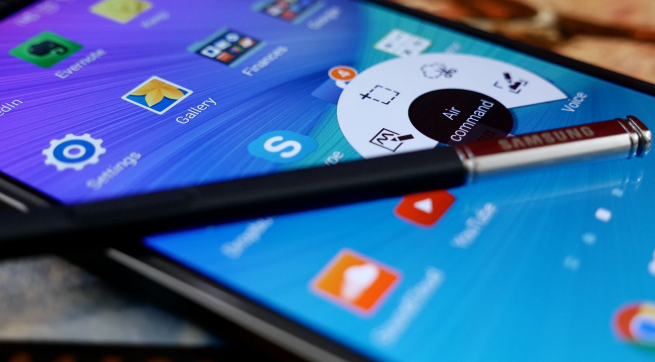 Samsung’s S Pen gives the Note 4 an advantage in some ways.

As mentioned, Samsung also provides a few specialized features like a heart rate sensor and fingerprint sensor, but also comes along with useful Multi-window capabilities to run multiple apps at once and specific features to allow for better one-handed use.

If you’re looking for Samsung-like software features, you won’t find them on the Nexus 6. Google likes to keep things plain and simple, while adding the perfect mix of personalization. The only bells and whistles on the Nexus 6 are going to be the new features that Lollipop brings along, but its smooth experience may be enough to win some people over.

Lollipop is the strongest Android experience you can get, but at this time the Nexus 6 is the only device shipping with it. When Samsung updates the Note 4 with Lollipop it’ll more than likely be just as skinned with its current feature set.

Let’s move on to camera performance. With the Note 4’s camera, we have a 16-megapixel shooer packed with optical image stabilization and UHD video recording. On paper, the Note 4 wins over the 13-megapixel OIS camera on the Nexus 6, but both seem to take very acceptable photos. I’ll let you be the judge of the photos being compared and let me know which are your favorite down in the comments section, but I think it’s a close call either way.

Like most other areas, the Note 4 is going to provide more features within its camera app. There’s a ton of stuff in there and it almost feels too cluttered, but I suppose Samsung would rather include everything instead of missing one thing. Both devices are capable of UHD video recording, but I found the Note 4 to be superior in this area. You can find video samples from the Nexus 6 in our full review video and be sure to check out our Note 4 camera test here.

So which one should you buy? If you’re deciding between the Galaxy Note 4 and the Nexus 6, it’s mainly going to come down to features vs performance. If you don’t care for the S Pen or the Note 4’s other specialized features, it’s probably best to go with a solid device like the Nexus 6. Google’s Nexus lineup will always receive the latest software updates first, but stock Android may be a bit boring to some people. In exchange for the lack of software features on the Nexus 6, you’re getting raw and uncut performance. There’s no clear winner here and as you would assume, the best device for you going to depend on your needs.

So I hope you enjoyed this comparison between Google’s Nexus 6 and Samsung’s Galaxy Note 4. Hopefully I’ve provided enough detail to help you make an informed decision. It’s obvious that these two devices are designed for completely different situations, but which one is right for you? Let us know what you think with a comment below.