It’s not always the easiest task to compare an Android device with one running iOS. Most people choose one platform or another as a personal preference or an investment into the ecosystem that provides what they need. Today we’re comparing the Motorola-made Google Nexus 6 to Apple’s iPhone 6 Plus. There are benefits to each side, but which one is right for you?

We’re going to be comparing the design, specifications, features, and camera performance between these two flagship phablets. If you’re looking for more, check out our Nexus 6 review and 9to5Mac’s iPhone 6 Plus review. There may not be a clear winner at the end of the day, but I’ll leave that discussion for the comments section below…

It’s no surprise that Google’s Nexus 6 is loaded up with the best specs available. Along with that, it’s the first smartphone shipping with Android 5.0 Lollipop which offers new design characteristics, a highly optimized experience, and performs like a winner. Because there’s not a third-party skin running on top of the operating system, it will be hard to find areas where the Nexus 6 will fail you.

As for the iPhone 6 Plus, we have a 5.5-inch IPS display with a resolution of 1,920 x 1,080 (401 ppi), an Apple A8 chip clocked at 1.4GHz, a quad-core PowerVR GX6450 GPU, 1GB of RAM, and a 2,915 mAh battery. If you’ve used iOS before, this device is going to offer a very similar experience. Apple is known for its software optimization and it will be hard to find any major performance issues here.

Check out our Nexus 6 vs iPhone 6 Plus comparison video below:

Each device is going to offer a quality build and design, but there’s one thing you may notice about the Nexus 6. It takes on almost all of the design characteristics from Motorola’s 2014 Moto X. Along the outside we have a smooth metal frame that keeps everything together, while the back side features a hard plastic design. Don’t let the plastic fool you though, this is a very solid device.

The iPhone 6 Plus features a unibody aluminum design that lives up to Apple’s design standards. The curved edges do make it a bit harder to grip, but if a full metal build is your cup of tea then the iPhone 6 Plus may be for you. Though with this design, it’s also very slippery in the hands, but most cases will address this concern. 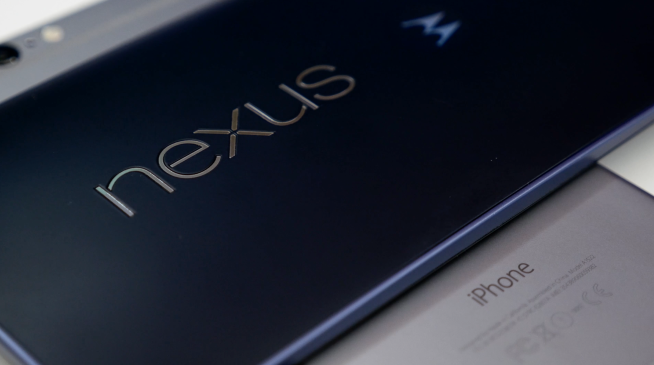 Nexus 6 vs iPhone 6 Plus design comparison.

With the Nexus 6 layout, you’ll find a 3.5mm headphone jack on the top, while the bottom makes room for the Micro USB charging port and a small microphone. On the right side we have the volume rocker, lock button, and a secondary microphone, while the top is home to its Nano SIM card tray.

Along with a 5.96-inch display, the front side features a 2-megapixel camera, the appropriate sensors, and dual front-facing stereo speakers. Finally, on the back we have a 13-megapixel shooter with optical image stabilization that’s capable of shooting up to UHD video quality, a dual-LED flash in a ring diffuser setup, small microphone, and our Nexus branding with the Motorola logo centered in a finger-sized dimple. Google’s Nexus 6 also comes with wireless Qi charging capabilities and a Motorola’s special Turbo Charger which will provide up to 6 additional hours of battery life from a single 15 minute charging session. Moving over to Apple’s iPhone 6 Plus, on the front you’ll find an earpiece, the appropriate sensors, 1.2-megapixel front facing camera (with 720p video), and the circular home button with a built-in fingerprint scanner that Apple calls Touch ID which will allow you to easily unlock the device, authenticate various apps, or make mobile payments with Apple Pay. On the left side of the iPhone 6 Plus we have the sleep/wake power button and its Nano SIM card tray, while the right side features its volume buttons and a mute switch.

You won’t find anything on the top of the iPhone 6 Plus, but the bottom features a microphone, 3.5mm headphone jack, Lightning port for charging, and a small speaker. Finally, on the back we have an 8-megapixel camera and dual-LED flash with optical image stabilization capable of shooting up to 1080p video at 30/60 frames per second and up to 240 frames per second at 720p.

While the Nexus 6 features a larger display than the iPhone 6 Plus, they are nearly identical in size. Motorola’s design keeps the bezels to a minimum, while Apple took an existing design and scaled it to fit a larger format. At the end of the day, both of these devices are very large. Because of this, it’s likely that you’ll want to use two hands with either of them.

Apple’s iPhone 6 offers a feature called Reachability that may prove to be useful in the one-handed department, but it’s not perfect and in most cases it’s just easier to use two hands. Unfortunately, you won’t find any one-handed features with the Nexus 6, but that may not a deal breaker for everyone.

The software experience between these two devices is highly based on preference, but there are aspects about both that lead to a great experience. The iPhone 6 Plus is running iOS 8.1 and offers a highly optimized feature set with a very minimalist approach. If you’ve used iOS before, this device won’t be too hard to navigate. 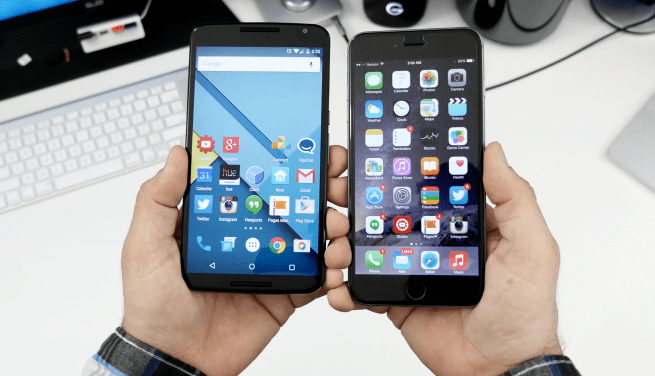 The home screen provides space with multiple pages to store and organize apps and you’ll find most of the device’s bells and whistles in the Settings app, Notification Center, and Control Center. Overall Apple keeps iOS very simplistic, but that’s what most of its users have grown to expect.

With the iPhone 6 Plus, Apple has introduced a landscape mode that works with the home screen and inside of most compatible apps. While this is nothing new from an Android perspective, it’s definitely a welcomed change for the iPhone’s home screen and extra space within apps thanks to new layouts. There are plenty of other aspects that create iOS 8’s user experience, and if you’d like to know more, check out this iOS 8 top features article on 9to5Mac. 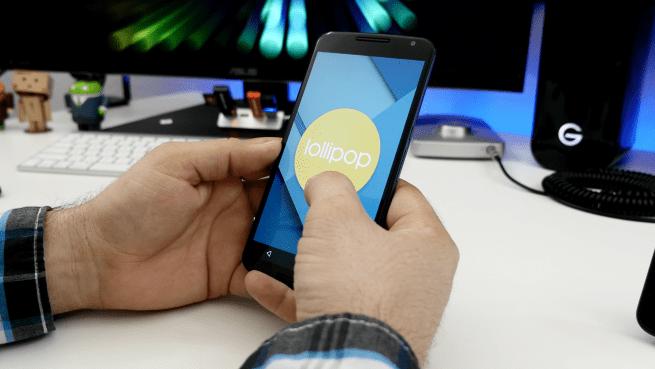 The Nexus 6 is running Android 5.0 Lollipop.

With the Nexus 6, we’re running Android 5.0 Lollipop. This is going to be one of the best Android experiences you’ll find, at least from a performance and design perspective. It may not include any of the specialized features that you’ll get with a Samsung, LG or HTC device, but it’s definitely the cleanest Android experience overall.

Android 5.0 Lollipop brings a lot to the table. We have a revamped interface that Google calls Material design and everything is put together with fluid transitions and pleasant animations. In Google’s eyes, this is the best Android experience you can get. With the fresh design and optimization happening here, it would be hard to argue with them. The Nexus 6 is Google’s baseline for Android devices for the next year or so and it packs a ton of performance with an enjoyable experience.

While Android may offer more personalization options, the feature set between these two devices is very similar. Both mobile operating systems have seen improvements across the board and there’s no right or wrong choice here. Which device you choose will be dependent on where your loyalty lies and which platform you’ve invested in the most. If you’d like to see my full review of the Nexus 6 or iPhone 6 Plus, be sure to check out the links below.

Each device’s camera quality is going to vary based on the environment and user. Both cameras feature optical image stabilization, but the Nexus 6 beats the iPhone 6 Plus on paper with a 13-megapixel camera. Don’t underestimate the 8-megapixel shooter on the iPhone 6 Plus though. Each camera has its strong points and weaknesses, but I’ll let you be the judge on this one. In my experience, the iPhone 6 Plus does win in low-light performance, but it bright environments, it’ll be hard to declare either device as the champion. The pictures below may look similar, but if you look closely you’ll be able to discover the differences between these two cameras.

On the other side of things, Google’s Nexus 6 shoots up to UHD video quality and also includes optical image stabilization to help shaky hands. Both of these cameras are capable of great things and you won’t be disappointed either way, but let me know your thoughts in the comments section.

So which one should you get? Well, I’m not here to tell you which of these devices is better. In fact, it would be hard to declare either one as the clear winner. Both the iPhone 6 Plus and Nexus 6 have great builds and offer best in class performance in their respective areas. Aside from iOS vs Android, it’s going to come down to which device suits you the best.

Thanks to the clean Android install running on the Nexus 6, it’s going to be a great phone for anyone making the switch from iOS. On the other side, Android users may find iOS to be very simple, but at the same time deliver performance in an aluminum and glass slab. You may be happy with either one, but which device do you prefer? Be sure to leave a comment below.