Google announced on Wednesday that it has fundamentally changed its reCAPTCHA security feature by removing CAPTCHAs entirely and adding a one-step solution for users to prove they aren’t robots. Instead of typing a few warped words, the new version of reCAPTCHA simply has a box labeled “I’m not a robot” that users can hover over.

The latest iteration of reCAPTCHA, which Google is calling “No CAPTCHA reCAPTCHA,” is much more convenient for users and should make online validation a lot less frustrating. The days of pounding your keyboard out of frustration when your CAPTCHA is denied for the fourth time appear to be over at last.

A simple check-box might sound less secure than distorted text for preventing robots and scripts from gaining access to a website, although Google recently conducted research that proves robots were able to crack even the most difficult CAPTCHAs with virtually perfect accuracy. As such, it created a new API with an improved back end.

“To counter this, last year we developed an Advanced Risk Analysis backend for reCAPTCHA that actively considers a user’s entire engagement with the CAPTCHA—before, during, and after—to determine whether that user is a human,” wrote Vinay Shet, Product Manager, reCAPTCHA. “This enables us to rely less on typing distorted text and, in turn, offer a better experience for users.”

Google will still require users to complete CAPTCHAs or match images if it is unable to determine if a visitor is a genuine user or a robot: 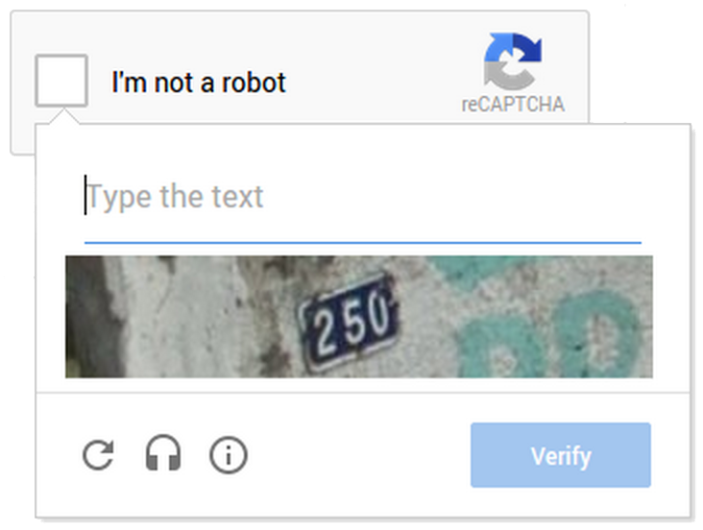 Google acquired reCAPTCHA in September 2009. The original security mechanism served the dual purpose of helping digitize books by relaying the results of deciphered words by humans to digitization projects. The new version of reCAPTCHA can be found on Snapchat, WordPress and Humble Bundle and should roll out more widely as the new API is adopted.