This is what Material Design would look like on Google.com 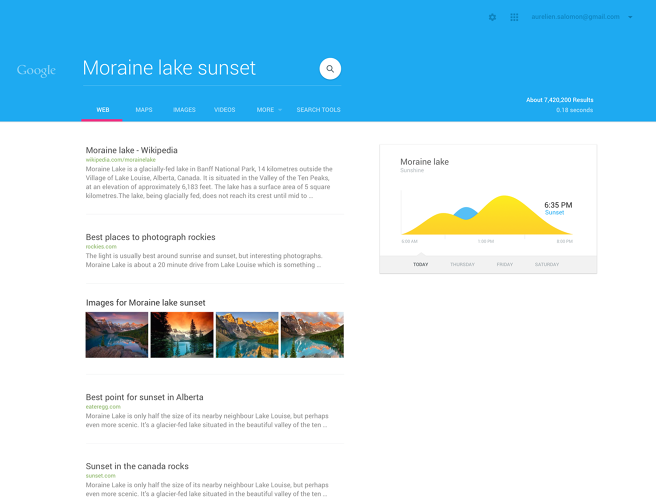 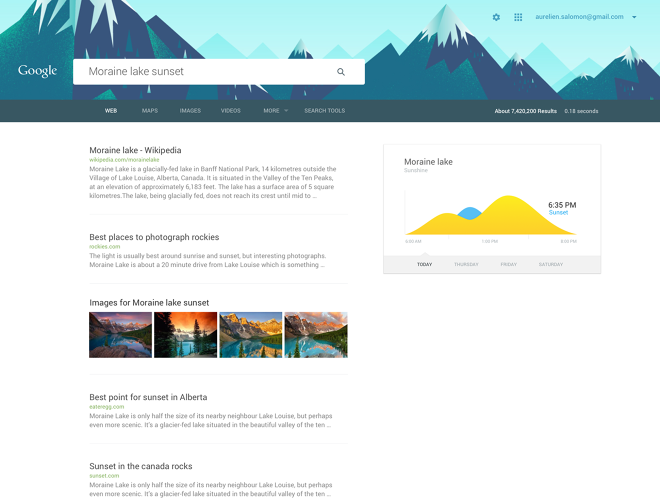 Material Design–announced at Google I/O 2014 in June of this year–was introduced as Google’s new way of presenting a coherent, beautiful user experience across apps, and one of the first pieces of software to exemplify the new look is the latest release of Android, version 5.0 Lollipop.  But Google is going beyond Android and has already started incorporating this design scheme within many of its other products, including the online interface for Google Docs, for instance. One place that hasn’t seen a Material overhaul (yet) is Google’s main search engine, but thanks to designer Aurélien Salomon, we have an idea of what it might look like–and it’s gorgeous.

The new look (via Fast Company) might seem at first to be a bit over-designed, compared to the sheer simplicity of Google’s current search engine. It may appear that things are just a bit too beautiful, and many would probably look at this and be concerned that some amount of usability or functionality of the tried-and-true design must be lost. But it appears, at least based on very basic analysis, that the redesign doesn’t sacrifice hardly anything. Even though the new design seems to make the search box much larger, puts much more empty space at the top, and spaces results out to be more easily read, it doesn’t actually show less information. In fact, it looks like the new design actually provides longer text snippets.

Notably, this is a drastic departure from the current design. While getting a new pretty look for a website we all use every day would be great, the formula is basically the center of Google’s DNA and there’s no way the company is going to make a change this drastic without making sure that it’s going to be not only not-harmful, but beneficial. And I’m sure the company–like it does with most of its products–would offer some kind of opt-in trial period to make sure users are happy and to incrementally improve design as feedback comes in. But we don’t even need to worry about that yet, because for now, this is just an idea.

To get a full look at Aurélien Salomon‘s concept redesign, head over to Dribbble.