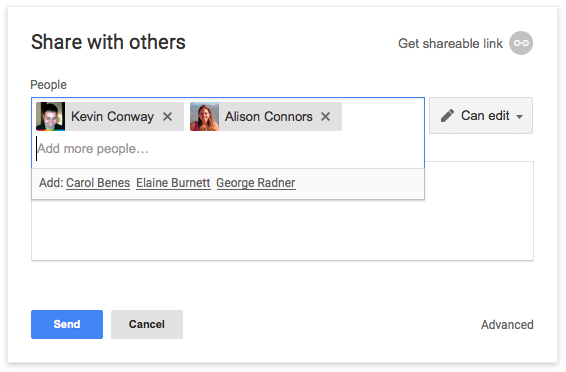 Google has made a couple of updates to its Drive and Docs editors that deliver smarter sharing and make it easier for collaborating with others. Starting today, after adding an email address to the sharing dialogue on either service, you will see profile pictures for each person you’ve added and, after adding two collaborators, suggested recipients based on who you frequently share emails or files with.

This sharing functionality is similar to what Google has already implemented on Gmail, and should be especially useful if you work with people that have the same name. Either way, the next time you go to share a Drive or Docs file, it will at the very least be a little easier on the eyes. The change should be rolling out to all Drive and Docs users effective immediately.

Google has been adding several features to Drive and Docs in recent months, including new image editing options and the ability to merge cells, automated list formatting, a new Material Design appearance on the web and new image editing tools. Google announced mobile apps for Docs, Sheets and Slides on Android earlier this year.