Moto E 2015 edition: 24 hours with the best small Android phone that (a very little amount of) money can buy

Yesterday morning the FedEx truck delivered a cute little diorama that represented a Motorola keynote event complete with reporter badge, stage, and most importantly a demo unit of the new Moto E. Very nice job Moto PR. Nothing like going into a review with a smile on my face in my blogger PJs. 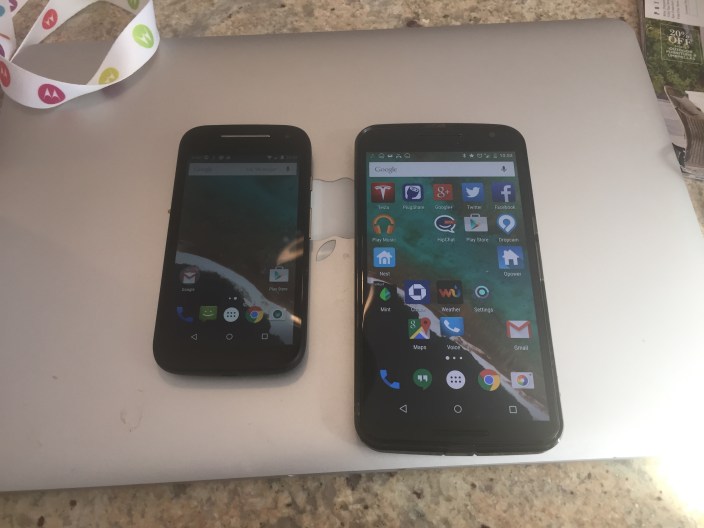 More importantly, the product they shipped is a big winner. The new Moto E, if you like your screens at 4.5 inches and non-Retina, is about the best thing you can get out there at any price. The fact that it is $150 for the LTE version and $120 for the HSPA+ GSM pushes this phone into no-brainer territory.

This is a really good, well built device…

I hadn’t tried the previous Moto E, instead having two different Moto Gs to play with. This definitely feels like the successor to those phones (especially with the new Moto Gs getting much bigger) with notable improvements all around. Probably most notable is the speed at which Android 5 Lollipop moves. Everything from the 5 megapixel camera (with much improved quality) to the app launching has improved likely with the help of the new quad-core processor.

Speaking of the camera, it snaps pictures instantly (unlike the Nexus 6) and loads up with a flick of the wrist like the Moto X. The images are sharp and videos are excellent at 720p resolution. This isn’t a superphone camera but would be in the top of the class with two-year-old phone imaging. I have to believe that Moto’s Camera app is better than the default Android for this reason. It is both faster and easier to use.

Like all Moto phones, there is no bloatware here. There is no carrier crap either. The only way I would know that this is an AT&T phone is by taking off the rubber outside band and looking a the SIM or looking at the carrier name in the top of the UI or settings.

I also like the fact that you can upgrade your phone’s storage with a cheap MicroSD card. With prices being super cheap, going up to 128GB of storage is now less than $100. A more realistic 32GB of storage can be had for around $15.

There is no NFC in this meaning that quick-pairing Bluetooth devices or using Google Wallet won’t be on the table either. That and the now small 4.5-inch 960×540 pixel screen are the two reasons I can’t see this being my daily driver. As an aside, remember when the HTC EVO came on the scene 5 years ago with a humungous screen? Smaller 4.3 inches!

Oh and the big battery is impressive as well. I quickly charged the battery when I got the E yesterday morning and 24 hours later I’m at 40% with some moderate to high use/testing. That is better than both my iPhone 6 and Nexus 6.

The big picture is important here. While Samsung, LG and HTC are all over the place, Motorola is sticking with the Android script only making positive changes.

Moto is making great phones across the board. They are being smart and consumer-focused on what matters. They are building features that people want and leaving out the gimmicks and blocking the bloat.

While certain features (like NFC and display) must be sacrificed to get a phone down near $100, it is completely impressive that Moto has got LTE, a Day+ battery, quad core processor and great feel into this device. I can easily recommend it to anyone looking for an entry level phone. In fact I’d got as far as to say you’d be foolish not to at least try it out.